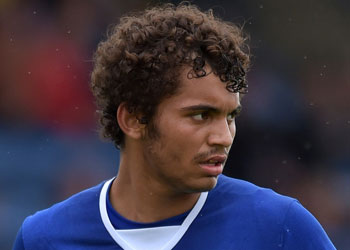 Delial Brewster joined Everton's Academy as a 12-year-old when he made the switch from Merseyside rivals Liverpool. The Southport-born forward's main attributes are his power, pace and an eye for goal.

He was still a schoolboy when he came off the bench as the Under-18s clinched the Premier League title at Goodison in May 2014 and was also part of the squad that reached the quarter-finals of the FA Youth Cup that season.

Brewster penned a two-year contract - his first professional deal - with the Club in July 2015.

On Christmas Eve 2015, it was announced that he would spend a month on loan at Stockport County in the National League North. He was quick to make his mark, netting for the Hatters 12 minutes into his debut. He returned to Everton to become the Under-18s' talisman as they lifted the Dallas Cup in March - the forward netting five goals in the tournament.

On 1 January 2017, he joined hometown side Southport on loan and promptly netted on his debut in a 3-2 win over Wrexham.

Delial Brewster was released by Everton when his contract expired in June 2017. He subsequently joined Chesterfield in League 2.