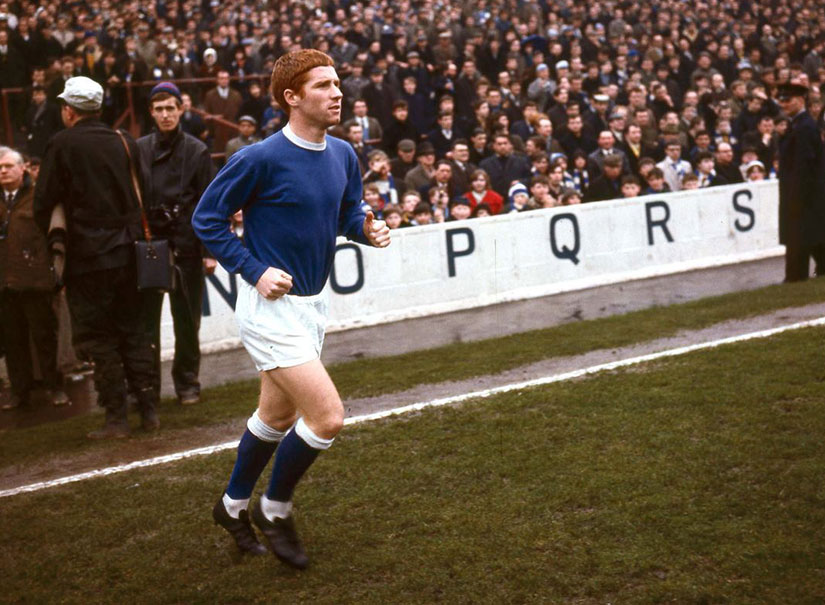 Alan Ball joined Everton shortly after winning the World Cup with England in 1966.  The fee of £110,000 made his transfer from Blackpool the costliest in British football history, but four years later it seemed money well spent as Everton's transformation into a top-class side culminated in the 1969/70 League Championship.

A year later, manager Harry Catterick was asked to put a price on the fiery red head of his inspirational midfielder.  “£1 million," was his response, a figure some five times greater than the British record of the time.  When asked if he might sell, he said: "I'd consider it, and then I'd say no,".  However, only nine months later he did, and Ball signed for Arsenal for just £220,000.  Catterick might well have been relieved when Ball failed to match his Everton achievements at Highbury.  Though the characteristic Ball passion was still there, Arsenal's star was waning, and it was the Goodison Park crowd who saw the best of him.

Ball at his best was an awesome sight; he was a potent cocktail of courage, delicacy, confidence and burning desire to win.  He didn't keep it up for just part of the game, either — he possessed the most incredible stamina, allowing him to work hard for the whole 90 minutes, match after match after match.  In the early part of his time at the club his goalscoring record put many forwards to shame: 56 goals in three seasons.  As time went by the goals came less frequently, and Ball's frustration began to show.

That desire to win was both a strength and a weakness.  He was motivated and a motivator, but he also upset people; he hated losing, often to the point where confrontations ensued with opponents, match officials and occasionally team-mates.  But without it, he wouldn't have been the player he was, and it was surely a price worth paying for what he offered in the way of footballing quality. Catterick nevertheless tried to calm him down by making him captain, in the hope that the extra responsibility would restrain his temper.  It worked, up to a point, but it proved a more effective tactic when Ball himself tried it as manager of Southampton on a player of exactly the opposite temperament — Matthew Le Tissier.  Ball's managerial career was never in the same class as his playing career. Of the clubs he managed only Southampton have not been relegated under his reign, a fate that befell Blackpool, Portsmouth — where he in fact enjoyed his most successful spell — Exeter City and Manchester City.

In November 1999 Alan Ball finally left Portsmouth for a second time, with Pompey in off-the-field disarray, and declared that it had probably been his last job in football.  He was honoured, along with the rest of the 1966 World Cup winners, with an MBE for his services to football in the New Year's Honours List at the start of 2000.

Alan died suddenly in 2007 after suffering a heart-attack at his home in Warsash, Hampshire trying to put out a bonfire that had got out of control in his back garden. He was still only 67. His wife, Lesley, had sadly passed away from ovarian cancer just three years previously. He was survived by his son Jimmy and daughters Keeley and Mandy.