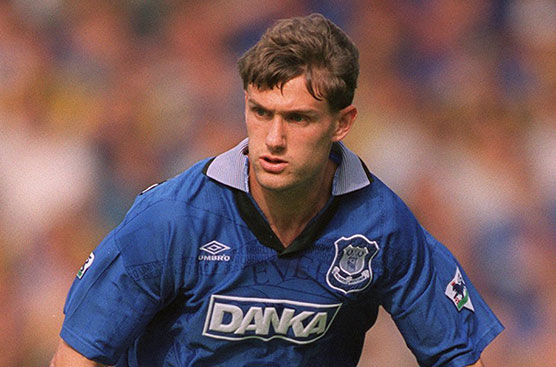 It's not often that a player moves to another club only for the man who sold him – and presumably saw him as surplus to requirements – to become his new boss again, not once, but twice! It first happened to Andy Hinchcliffe when Howard Kendall transferred him from Manchester City to Everton in July 1990 in exchange for Neil Pointon and £200,000.  Many City supporters were severely critical of the deal, which they saw as dispensing unnecessarily with a promising prospect, a defender with a rich flair for going forward who could double as a midfielder.

Andy started soundly with the Blues, catching the eye with his pace up and down the flank and striking the ball with impressive crispness.  He was especially adept at crossing on the run, having a knack of bending a ball tantalisingly out of a keeper's reach, and was capable of springing offside traps with probing passes.  However, fitness problems disrupted his progress and thereafter he never seemed sure of his place as Kendall experimented with back-four permutations.

At times, the fans were mystified by his absence – perhaps the manager had reservations about his defensive qualities – and as new players arrived in 1991, Hinchcliffe's task in building a future at Goodison appeared to grow ever more formidable.  The following spring brought a brief resurgence in fortune as he compiled a sequence of creditable midfield performances.  Then injury struck again and the ill-fated Mancunian was back on the sidelines.

Andy's progression at Everton continued in fits and starts as the managers changed between 1993 and 1994.  He eventually established himself as the first-choice left-back in Joe Royle's briefly resurgent team of the mid-1990s.  Hinchcliffe played a key role in the relative successes of the 1994-95 and 1995-96 seasons but his unfortunate collision with an advertising hoarding at Goodison Park in a game against Leeds United on December 1996 and the resulting knee injury was seen as a significant contributing factor in the ultimate decline of that Everton team, and the fall of their Royle emperor who left at the end of March 1997.

Earlier, Hinchcliffe had achieved the ultimate recognition all players crave: to be chosen to play for one's country. Solid performances for Glenn Hoddle's England team in Georgia, Moldovia, and at Wembley against Poland confirmed the maturity and assurance he brought the left-back/wing-back role, albeit in the absence of Grame Le Saux with a long-term injury.

Andy's contributions to the England team did not at first seem stellar, but the Italian spies had some complimentary words to say about him that proved fatefully true for Everton:

"Since he came into the team, he has been a revelation," said Pietro Carmignani, Italian Number 2. "I know the England press don't think a lot of this guy, he gives England more strength to their shape than they have had before.  He's not such an exquisite player, but he holds the side of the field and allows Beckham and Gascoigne to get into forward positions."

His loss due to injury, soon after those words were spoken, coincided directly with Everton's decline from title dark-horses to relegation battlers in 1996/97.  Hinchcliffe missed the rest of the season, and made a slow recovery to eventually come back in September 1997 but the quality simply wasn't there.  His crosses and dead balls of note were few and far between.

The transfer rumours, which had started the day Kendall returned, eventually became fact at the end of January 1998, following a move to Tottenham that fell apart farcically as Spurs got cold feet about a possible Achilles heel injury.  Kendall finally sold Hinchcliffe again when Ron Atkinson bought him for Sheffield Wednesday in 1998.

In March 2002, Hinchcliffe was forced into retirement at the age of 33 after knee surgery failed to get in back into shape after another injury.