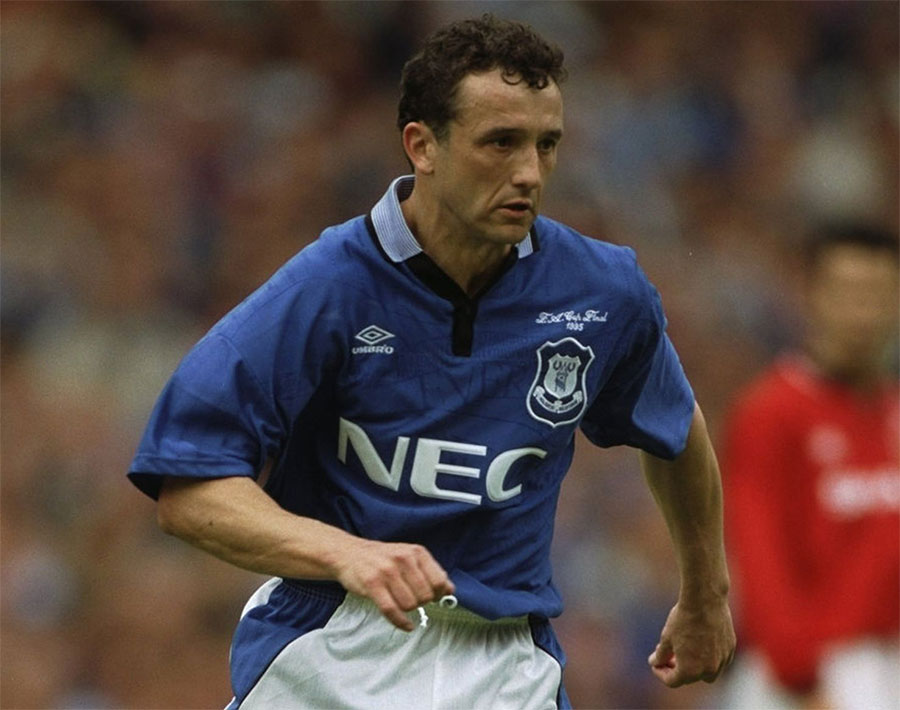 "....And as you come back to us, the roof has been taken off by a thunderous shot from Barry Horne!"  Mike Ingham's words on Radio 5 Live, almost exactly halfway through the second half of the afternoon's commentary on 7th May 1994.  The date is especially significant to Everton fans as the occasion of the most important game in the club's modern history, the match against Wimbledon – known thereafter as That Game – in which they famously came back from 0-2 down to spectacularly win 3-2 and avoid relegation from the Premiership by the skins of their teeth on the final day of the season.

Horne's goal was the second of Everton's three that sun-baked afternoon, almost certainly the most important in a career that hadn't seen him score many.  Those he did get were often spectacular, as was this one – a swerving, dipping half-volley from 30 yards which cannoned off a post into the Gwladys Street End net.

Already approaching 30 and a Welsh international by the time he joined Everton from Southampton for £700,000 in August 1992, Horne enjoyed something of an "Indian Summer" to his career during his time with the club.  He was always more of a ball-winning midfielder than a creator, but as such he was one of the best of his type, and in fact had a creative streak that few gave him credit for.  It was a style of play that was right at home in the Everton sides he played in, particularly after Joe Royle's inheritance of the manager's chair and the advent of his famed "Dogs of War".

The club was perennially fighting off the threat of relegation, and Horne's robust play and industrious work alongaside Joe Parkinson in particular were crucial to the club's survival and endeared him to the fans.  He was a vital part, too, of the 1995 FA Cup-winning campaign.  He became captain of Wales during his stay at Everton which ended in 1996 when he joined Birmingham City for £250,000.