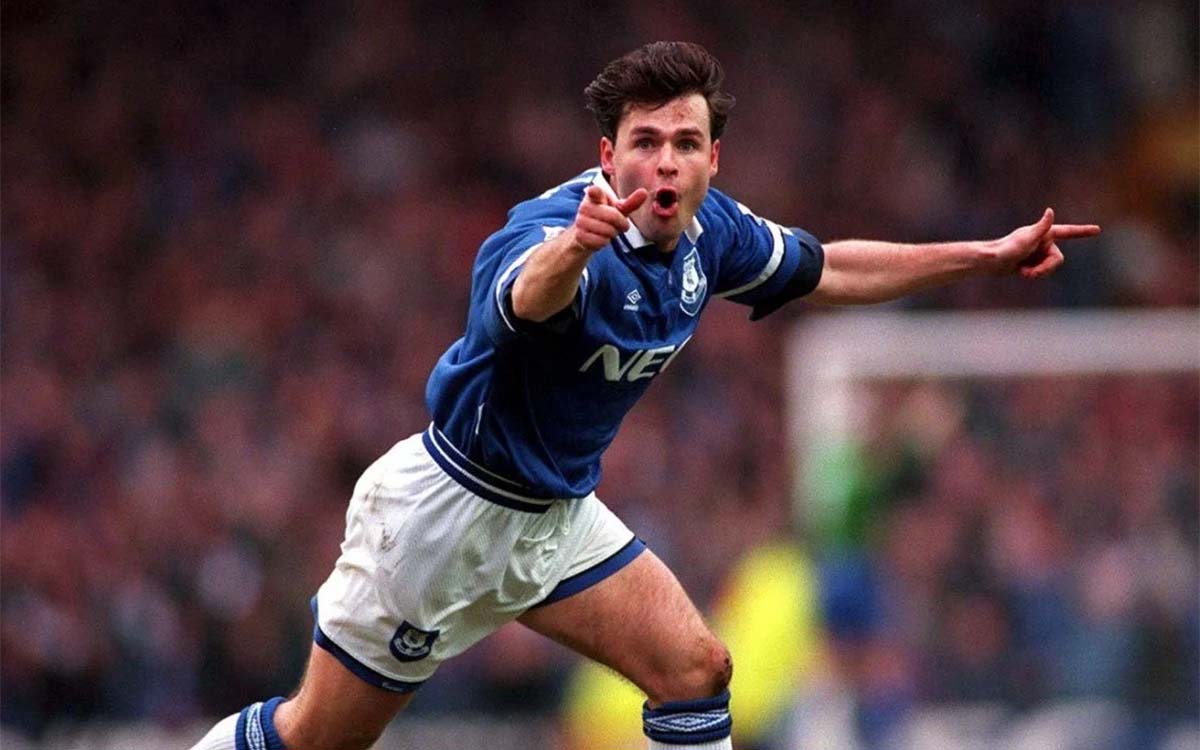 With these words, enigmatic winger Anders Limpar recalled how he left Arsenal in a surprise move to Mike Walker's Everton in February 1994.  He made his debut in a home defeat to Tottenham Hotspuron 26 March 1994, and made the left-wing position his own as a weak Everton team fought desperately to stay in the Premier League.

The most bizarre match in a blue shirt for Limpar was that relegation battle against Wimbledon in May that year on the final day of the season.  With not two minutes gone, the Swede inexplicably handled the ball in the area to give away a needless penalty and hand the Dons a lead that they would extend to 2-0 18 minutes later when Gary Ablett turned the ball into his own net.

But a piece of marvellous trickery later balanced the books as Limpar made the most of minimal contact from defender Peter Fear in the Wimbledon box and bought Everton a vital penalty that Graeme Stuart converted to begin a fightback that would end in salvation on one of the most dramatic days in the Blues' history.

Limpar arguably peaked with Everton in the FA Cup run of 1995.  Some scintillating runs, fantastic cross-field balls, and other deft touches gave the Everton midfield creativity their Dogs of War style had all but consumed and three classic breakways were quintessential Limpar. The first two came in the semi-final against Tottenham at Elland Road, perhaps Limpar's greatest ever game for the club.  He signalled his intent by forcing three fine saves from Ian Walker in the first 10 minutes of this classicmatch.  The counter-attack masterstrokes came when he built a great move with Barry Horne for Daniel Amokachi to head in Everton's third goal.

Later, he released Ablett for a very fine cross that Amokachi converted for the fourth that day.  The next was in the Final, when his theft of the ball from Manchester United's Paul Ince suddenly set up a 4-on-2 breakaway situation with Matt Jackson, Stuart and finally Paul Rideout combining to score that decisive first-half goal at Wembley.

Limpar did not score all that many goals for Everton, just six in all.  Memorable strikes at West Ham and Leicester came in a purple patch of three goals in three weeks during that Spring of 1995.  But perhaps his best goal at Goodison came against Southampton in August 1995. He received the ball from Andrei Kanchelskis in deep midfield.  Slipping it sideways to Rideout, he moved forward for a return pass that was perfectly weighted just outside the area.  A marvelous left-foot shot screamed inside the left-hand post in front of the Park End Stand.

Limpar received the most flattering accolades from manager, Joe Royle, in the build-up to the 1995 FA Cup Final. Limpar was described as "the most skillful player on the field..." But the next season was to prove a difficult one for Royle and Limpar as the Swede repeatedly tried the manager's patience with a series of desperately inconsistent displays.  The final straw may have been that fateful FA Cup replay at Port Vale in 1995-96, Joe Royle's so-called watershed.

In his last season at Goodison Park, Limpar vowed to fight for his place, but the writing was on the wall.  Royle had mysteriously stated more than once that he did not want to play with two wingers (Limpar and Kanchelskis).  Then, in only his second full start, Limpar became a part of the annual Coca-Cola Cup fiasco as Everton crashed out to York City.  This was to be Limpar's last full appearance for Everton.

A Christmas injury crises  in 1996 saw the Everton midfield decimated, but still no role for Limpar, other than as bench-warmer on the list of unused subs.  He did run on to his beloved Goodison Park in a blue first-team shirt for one last time on New Year's Day.  He replaced the ineffective Kanchelskis after 71 minutes as Everton lost 2-0 to Blackburn Rovers in an uninspired performance.

It came as no surprise that Limpar joined a growing group of ex-Evertonians at Birmingham City, although the paltry fee of only £100,000 seemed at best derisory.  The word was that Limpar would be off for free anyway at the end of the season, so Royle a least recouped a little cash from one of Walker's more successful signings. The Everton fans will always remember the little enigmatic Swede; his incomparable mistakes and skills moved Everton from the depths of despair to the joy of a Wembley triumph.

After retiring from football, Anders opened The Limp Bar at Norra Bantorget in Stockholm, just two stonethrows from the Central Station.  He won the championship with Arsenal and was worshipped by their fans, but the decorations in his bar testify that he still thinks warmly about Everton.