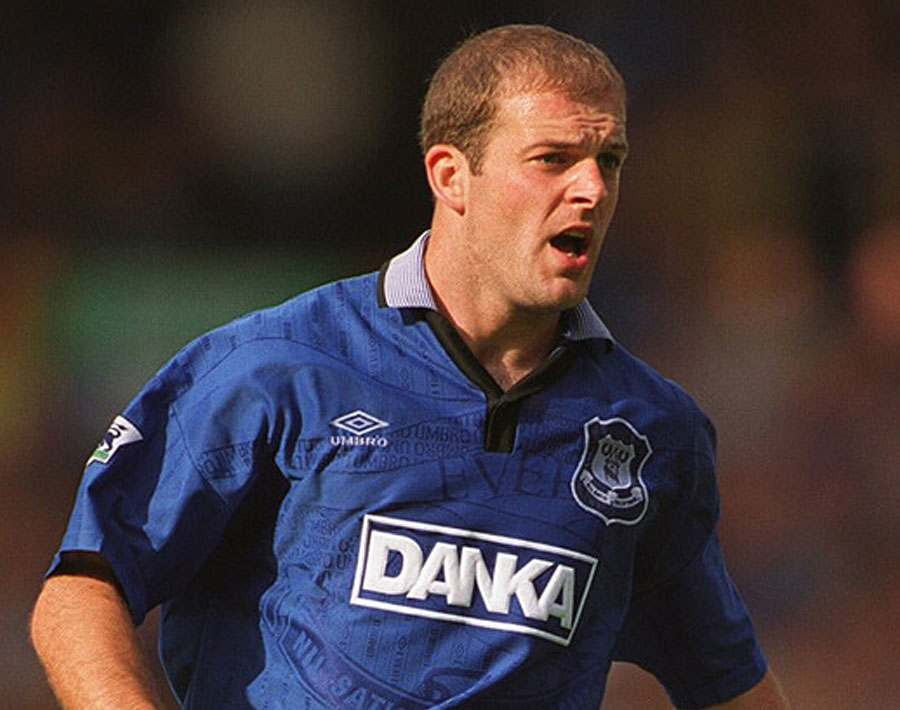 Joe Parkinson was the kind of player who is vital to every team but who will never be a superstar.  Sadly, in the case of "the Pieman" from Wigan, though he would form the backbone of the team that won the FA Cup in 1995, he never got the chance to show how important he could in the centre of the field for Everton over the long term because of a career-ending knee injury.

Parkinson may go down as the most successful purchase of Mike Walker's mercifully brief and potentially disastrous tenure as the Toffees' manager.  When he was purchased from Bournemouth on transfer deadline day in March 1994 for an initial fee of £250,000, many regarded him as little more than a squad player, with Walker commenting that it might take 12 months for him to "come through".  Joe thought differently, and was in the first team from the start of the next season.

Parkinson started his Everton career as a defender but played the majority of the 1994-95 and 1995-96 seasons in the centre of midfield.  Under Walker's successor, Joe Royle, the Everton midfield was revitalised on a diet of "Pal" and the bones of old Liverpool players: the Dogs of War had been unleashed.  John Ebbrell, Parkinson, and Barry Horne became a solid and virtually impenetrable wall that was to prove itself with a record of seven successive clean-sheets in the Premiership campaign of 1994-95.  It wasn't pretty, and it wasn't School of Science but it was what the doctor ordered to stop the rot of fancy but ineffective football that Walker had tried to institute at Goodison Park.

Uncompromisingly combative and a real power-house for the team, Parkinson scored his first Everton goal in the 5-0 5th Round FA Cup rout of Norwich City in 1995. He was the only un-capped member of the Everton team that went on to win the FA Cup that year.

The importance of Pieman's role in the Everton midfield was emphasised early in the 1995-96 campaign when he missed six games with an ankle injury. Everton failed to register a win in his absence.  It was with diligent work throughout this season that Parkinson finally won over the more skeptical Evertonians.

It is a sad irony that the true value and importance of Parkinson in the centre of Everton's midfield was only just becoming widely recognized in the 1996-97 season.  Parkinson was consolidating his role when he injured his knee during the frenetic Christmas period. He came back a month later but was clearly not fully fit.  He was apparently sustained with pain-killing injections for some of the time, appearing in a few games until his knee finally gave out at home to Leicester City.

Three operations and many months later, the rumour mill started cranking that Joe may never play again. Although they were unlikely to accept any responsibility for this potential tragedy, the alleged approach taken by the club physio and the manager in persuading their charges to "play through the pain barrier" with the aid of pain-killing injections was brought into question.  First Ebbrell, and then Parkinson.

In September 1997, amidst the rumours that he was crocked, Joe admitted that his continuing injury nightmare was making him depressed but he refuted claims that he wouldn't play again that season. "I've not discussed it with the manager Howard Kendall," he said, "but I had a set back a few weeks ago and it was decided not to push it for a while."

A trip to Sweden for some revolutionary new surgery to rebuild his knee meant that he played no part in the 1997-98 debacle that was Everton's season that again almost ended in relegation until a second final-day escape in the space of four years kept them up. Treatment of Parkinson's knee problem continued and he was given the all-clear to resume light training in April 1999 and by August that year he was aiming to join the first team squad in training.

Sadly, Joe was forced to admit defeat by November when he announced that he was retiring from the game, his knee getting worse under the strain of playing real football, as opposed to just training.

In March the next year, Bill Kenwright appointed Parkinson as the club's first Fan Liaison Officer in a move which suggested better attention to fans' issues and concerns from the new regime but it wasn't to be the solution for Joe, who found the job a painful daily reminder that he could no longer play the game he loved.  Graeme Sharp took over the job in October 2000 and Parkinson eventually moved into coaching, starting at with Wigan in 2012 and as assisant manager he helped Hartlepool United get promoted to League Two in 2020-21.

Echo Interview
Article from the Independent on Sunday
Watch: 2019 Interview for Hartlepool United