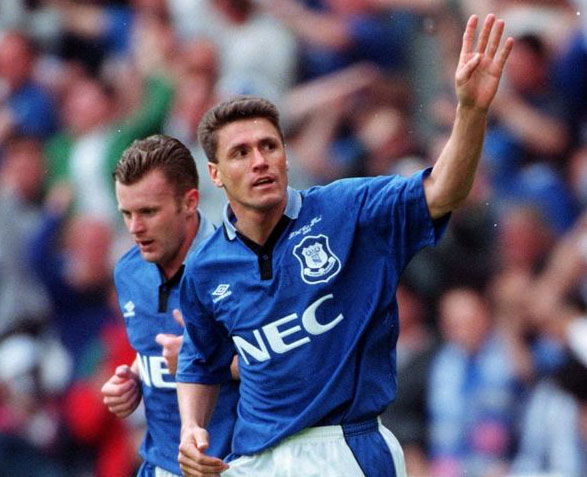 Paul Rideout arrived at Everton with little fanfare but left the club having gone down in history as the last man to score the winning goal in an FA Cup Final before a club-record trophy drought set in.

The Bournemouth-born striker was signed by Howard Kendall in August 1992 from Glasgow Rangers for just £500,000 to partner Tony Cottee in the Everton forward line. His first goals did not come until October 1992, in a League Cup tie against Rotherham United, when Paul scored twice.

The partnership with Cottee never really blossomed under Kendall; he had them competing for that famous No 9 shirt and they only started together 4 times that first season.

The 1993-94 season started better, with Rideout and Cottee getting more than a dozen consecutive starts, and producing 16 goals together (seven in the League Cup games against Lincon City) but injury stopped that run, team form went downhill, and eventually Mike Walker came in in January 1994, when Rideout began to figure mostly as a substitute.

Rideout was in the starting XI on that near fateful day in May 1994 when the Blues came back from 2-0 down to beat Wimbledon and preserve their top-flight status in the most dramatic of fashions but the slide that had put the club in such danger to start with continued into the following season.

With Rideout leading a particularly ineffective strike force devoid of Cottee, and Everton struggling desperately at the foot of the table, the team's first win came didn't come until after 13 games and Walker was already on his way out of Goodison Park to be replaced by Joe Royle.

In Royle's first game as the new manager, memorably against Liverpool, Rideout came on as a second-half substitute to slide home the clinching second goal after Duncan Ferguson had thundered the underdog Blues into the lead.  He went on to play for most of the season, apart from a spell of injury in the spring.

Rideout will always have a special place in Everton history, though, for that goal at the old Wembley Stadium in May 1995. He was there to head in the winning goal of the 1995 FA Cup Final after Graeme Stuart had rattled the crossbar and this capped off perhaps Rideout's finest season in an Everton shirt, when he was leading scorer with 16 goals.

Rideout remained in the side until two months into the 1995-96 season, when he picked up an injury against Sheffield Wednesday. Unfortunately for him, Ferguson was just back out of prison and so Paul lost his place at the front.

1996/97 was a difficult one for Rideout.  At the age of 32, his lack of pace was beginning to show, and Michael Branch was getting on the teamsheet ahead of him  He was left warming the bench on 21 occasions and only got onto the field 7 times, usually when there were injury problems. He came into the midfield for the FA Cup match against Swindon Town, and played very well, but after a poor performance against Wednesday he was dropped again and didn't get many more chances.

It was clear that he could not run down his career at Goodison, and in April 1997 a very lucrative opportunity came his way in the Far East.  A transfer to Huan Dao Vanguards of Xaopyangon, China, was arranged for £250,000 with his personal contract reportedly including payments totalling £350,000 to make a tidy retirement nest-egg.

However, his Goodison days were not quite over: in the spring of 1997, caretaker-player-manager, Dave Watson, was left a depleted and injury-riven squad by the departing Royle.  Desperate for players, Watson called Rideout back from China before the transfer was completed to support an ailing midfield.

Rideout's last performance in the Royal Blue shirt of Everton will be remembered by many: it was a vital home game against Tottenham Hotspur.  Rideout was a magnificent inspiration in the midfield, taking command and spraying around passes as the team clung to an early Gary Speed goal.  Victory and three vital points were assured in no small part by Rideout's masterful midfield contribution.

His career would take him the United States with Kansas City Wizards, back to China with Shenzhen Jianlibao and then saw him return to Merseyside with Tranmere Rovers for his swansong before he retired from playing in 2002. He would end up settling in the US, taking a coaching role with Kansas before eventually moving to Arizona.