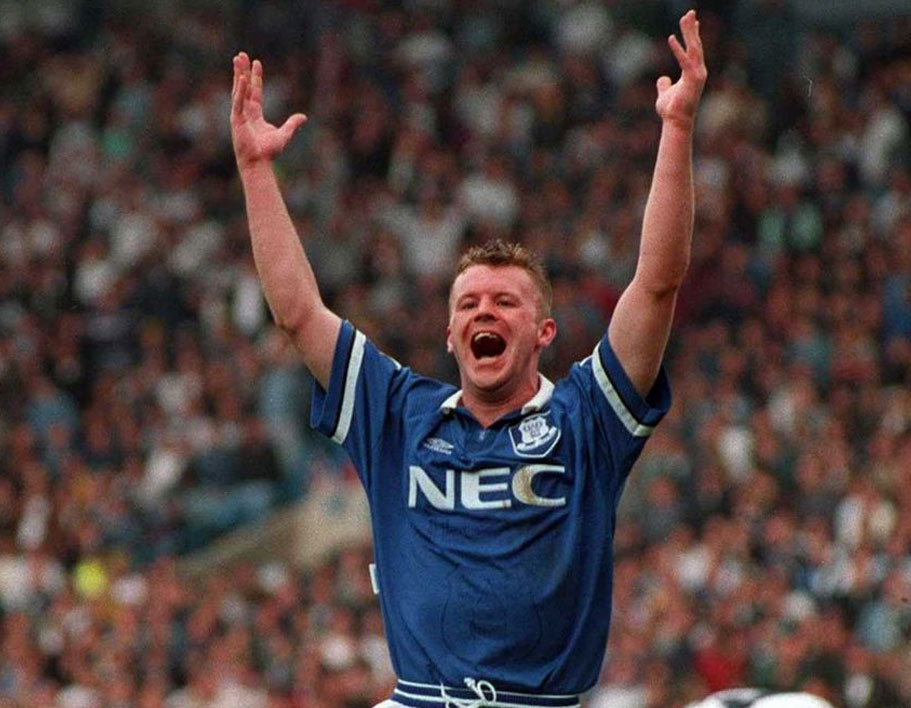 When Graham Stuart arrived from Chelsea in an £850,000 deal in the summer of 1993, it's unlikely he, his new manager, Howard Kendall, or anyone else envisaged how important a role he would come to play in some stand-out occasions in Everton's history.

From saviour with two priceless goals in "That Game" on the final day of the 1993-94 season, to goalscorer in a famous FA Cup semi-final at Elland Road the following year and inadvertant supplier of Paul Rideout's winner in the Final at Wembley a month later, "Diamond" wrote his name into Goodison folklore during his five years at the club and became one of the club's adopted sons once he had hung up his boots.

Stuart was a graduate of the FA School of Excellence. He scored on his Chelsea debut in 1990, a 3-0 win over Crystal Palace but after 87 games in Chelsea's colours, Kendall persuaded the young cockney to leave Stamford Bridge and venture north to Goodison Park.

Very much a manager's player – eager to please, hard-working and tireless; willing to play in any role as long as he is on the field – Stuart wasn't seen as a transformational signing but he proved to be an invaluable member of the Toffees' team.

The scorer of sometimes spectacular, sometimes crucial goals, Stuart's courage and, perhaps, good fortune ensured that Everton preserved their top-flight status in almost improbable fashion in 1994 with their dramatic 3-2 win over Wimbledon, having fallen behind 2-0. Stuart took the penalty that halved the Blues' deficit heading into half-time and after Barry Horne had pulled a piece of magic out of the hat with a stunning 30-yarder, Graham despatched a bobbling shot past Hans Segars in the Dons' goal to secure a famous victory.

A year later, Stuart played a large part in Everton's winning goal in the FA Cup Final. The Londoner received a pass at the end of Anders Limpar's breakaway but planted a side-foot shot into the crossbar but thanks to Paul Rideout, the rebound ended up in the net and the Toffees hung on for victory despite a second-half onslaught from favourites Manchester United.

Stuart's best season was also Everton's best in what was an otherwise miserable decade: 1995-96. He excelled in a team that boasted the silky runs and sizzling shots of Andrei Kanchelskis, which may have taken the pressure off Stuart, allowing him to perform more effectively in his favoured role as a striker.  At one stage, manager Joe Royle was touting Stuart for a place in the England squad as he finished the campaign second-top scorer behind the Flying Ukrainian with 14 goals.

In November 1997, Stuart became the first notable casualty of Howard Kendall's third spell when he was persuaded to move to Sheffield United in exchange for Carl Tilerand Mitch Ward.

Stuart will always be remembered by Evertonians, though, for the tremendous effort, workrate and commitment he showed when wearing the royal blue shirt.  The loss of such a player was rued by some as Everton struggled to narrowly avoid relegation again by virtue of goal difference by the end of the 1997-98 season.

Stuart spent 18 months at Sheffield United before returning to his roots in "the Smoke" with Charlton Athletic in 1999.  After six pretty good years at The Valley, he was transferred to Norwich on the last day of the January 2005 transfer window before he hung up his boots.

He would eventually return to Everton and take up a role as an official Ambassador of the club and a regular matchday commentator with Darren Griffiths.