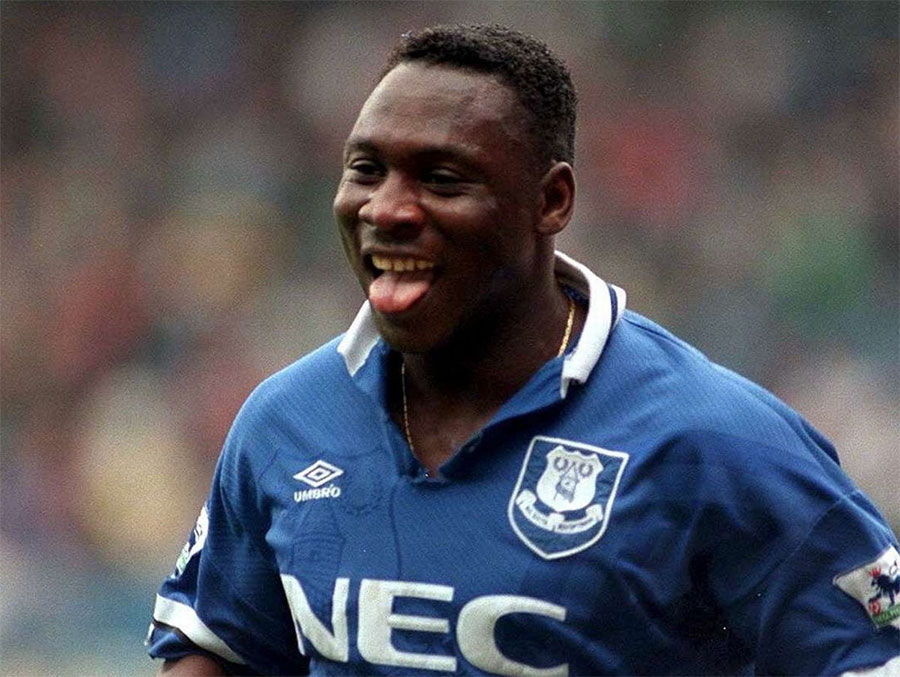 Daniel Amokachi was one of Mike Walker's key signings in the summer of 1994. The Nigerian had come to prominence in Belgium with a prolific scoring record at Club Brugge that included becoming the first man to score in the revamped Champions League when he netted against CSKA Moscow.

It was his exploits for the exciting Super Eagles team that made such a splash in the 1994 World Cup in the United States, however, that earned him a £3m move to Goodison Park that summer. Great things were expected of the then 21-year-old but while he would go down in Everton folklore for his exploits in the run to FA Cup glory in 1995, his time on Merseyside was on the whole a little disappointing.

His first few months at the club were turbulent as Walker oversaw a dreadful start to the 1994-95 season that would see him sacked by early November, during which time Amokachi managed just one goal. By that time, Duncan Ferguson had arrived on loan from Rangers and Walker's successor, Joe Royle, would immediately adapt the team's approach to capitalise on the Scot's talents which increasingly made him the focus of Everton's attack.

Indeed, though "Amo" started that iconic Merseyside derby against Liverpool in which Ferguson announced himself as a Toffee, he wouldn't start another first-team game until the spring.  He was away for an extended period with the Nigerian national team which did not help his prospects under Royle who found it difficult to him fit a player who was arguably better playing in "the hole" behind the front two in his preferred 4-4-2 formation that was better suited to Ferguson and Paul Rideout.

Amo returned to the first team against Queens Park Rangers, coming on as a substitute in place of Brett Angell who just played his last game for Everton but his temporary rehabilitation occurred in the role of striker – by a now famous mistake! No-one will forget the strange circumstances surrounding his entry onto the field during that totemic FA Cup semi-final against Tottenham Hotspur in April 1995, when Rideout was injured and Amokachi brought himself on as his replacement before Royle could hold him back. Two lovely breakaway goals later, and the name on the 1995 FA Cup was not to be Tottenham Hotspur's, but Everton's!

Daniel came on late in the Cup Final at Wembley as a sub for Anders Limpar, and appeared to have a golden opportunity to embarrass Peter Schmeichel when the Manchester United goalkeeper was way out of his area but Amo just didn't seem to realise the chance, and his moment of potential glory slipped away.

In his second season at Goodison Park, Amokachi ended up hovering around the periphery of the first-team squad, playing in a little more than half of the games without really impressing his manager.  He started well, coming on as sub for Limpar against Arsenal, and then getting a run of eight games with three goals.  He scored some impressive and valuable goals, not least the last-minute winner on a cold European-night in Reykjavik. But he missed a great many more chances and, at the end of the day, fans were left to remember his inability to really impose himself consistently on games.

His two years with Everton ended where they had started – in America.  Amokachi went on to win a gold medal with Nigeria as they won the Olympic soccer final in 1996, with Amo scoring the second equaliser that helped them defeat Argentina. By that time, however, he was no longer an Everton player, having moved on to the Turkish club, Besiktas in Istanbul for just £1.75m.

Amokachi would spend three years in Turkey before his career was ended by injury in 1999. After failing to pass medicals at 1860 Munich in Germany and Tranmere Rovers back on Merseyside, he had abortive attempts to resume playing at US Creteil in France and Colorado Rapids but couldn't stay fit and he was forced to hang up his boots.

He then moved into coaching, managing Nasarawa United, Enyimba Aba, Ifeanyi Ubah, resigning after five weeks in the post.[6] In January 2016, he was named as manager of JS Hercules