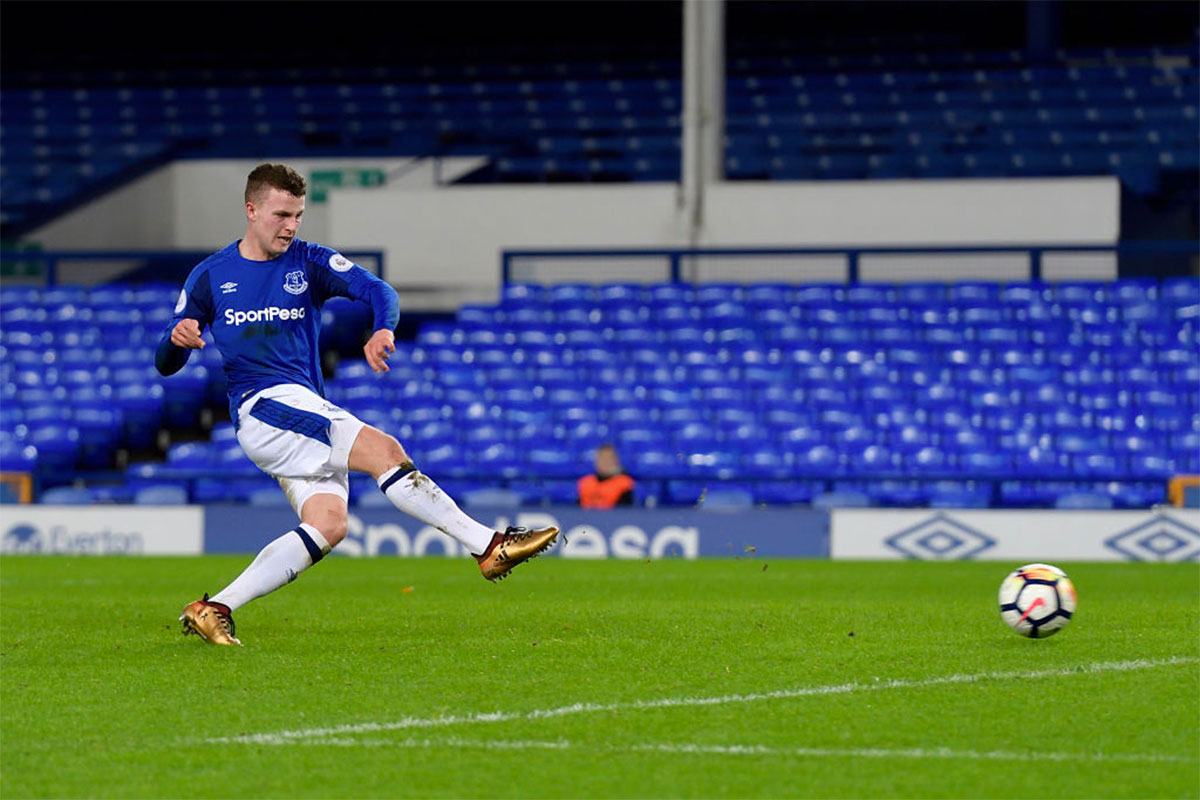 After catching the eyes of Blues scouts when he was playing for Wrexham and his home club, Bangor, Nathan Broadhead joined the Blues’ academy as a 10-year-old and progressed through the ranks, enjoying an outstanding campaign for the U18s in 2015-16 by being named Player of the Season, finishing top goalscorer, and helping fire the young Blues to the Dallas Cup.

The Wales youth international, who can play as a striker or winger, broke through into David Unsworth’s title-winning Under-23s side in 2017. On the back of this evident progress, he was given a new 3-year contract in May 2017 that would run through 2020.

"I've been an Evertonian all of my life and it feels like the perfect place to be for me," he said. "I'm just glad it's all done and I'm looking forward to next season now."

Nathan would travel with the first-team squad to Cyprus for the dead rubber group game in the Europa League against Apollon Limassol, where he would come off the bench in the 82nd minute to make his senior debut.

That was just a taster, though, and it was back to running the hard yards and building the groundwork that would lead Unsworth to say, after he scored two goals at Anfield in March 2019 to beat Liverpool in Premier League 2:

"It's up to him what the next step is. If he continues to produce performances like that then everyone will want to take him on loan next season. So maybe a loan is the next step, maybe training with the first-team – but that's up to the manager – but he has certainly given himself a platform."

"We've had to wait for Nathan, physically, but now you can see he's the guy who can run all day, who's quick, his size doesn't deter him, he's brave and he gets on the ball.  He has no fear and technically he's outstanding and now he's adding goals to his game. I always asked for that consistency level of performance and if you are going to kick on and go into our first-team then you have to add goals."

Unsworth added: "He's a top young player and one of the best players I've worked with at this level. I hope he goes on and has a wonderful career because his ability certainly deserves that."

Broadhead was recognised for his impressive form for the Premier League 2 Champions with selection for Wales's summer training camp and a new contract in August 2019 immediately prior to his first loan assignment, a season-long transfer to Burton Albion in League One, with his No 55 shirt assigned to Einar Iversen. After a bright start, with a winning brace away at Gillingham in his second game,  injuries would increasingly limit Broadhead’s chances at Burton.

In December and January, he made just two cameo appearances in 14 games and ended up with relatively modest stats when the season was curtailed in March due to the Covid-19 pandemic, with health restrictions preventing him from returning to Finch Farm for training as the lockdown eased. With one year remaining on his Everton contract, the club let it be known that they would consider offers for him.

But Broadhead stayed with the club throughout the 2020-21 season after starting with an injury that would limit his games for the Under-23s. When he did regain fitness, his form was good, with 11 goals in 18 starts, eventually training with the first-team and getting a string of games on the subs bench for senior games once the number allowed was increased from 7 to 9. And this would provide him the opportunity to double his appearance record with the Blues, coming on as a sub at Brighton for the last few minutes, more than 4 years after his first appearance.

Broadhead was considered an asset to the first-team squad and signed a new 2-year contract after Ancelotti had departed, but before the new manager, Rafa Benetiz, was appointed. Broadhead would travel to the USA with the new manager and senior squad to win the Florida Cup, and was on the bench for the first game of the season against Southampton.

But the impression was that his development as a senior player still needed work and he joined Sunderland of League One on loan for the rest of the 2021-22 season.

Nathan Broadhead had a slow start at the Stadium of Light, spending most of August and September on the subs bench for League One games, before missing seven games through a hamstring injury, and he had yet to score for Sunderland in the league.

The 21-year-old's return to action has taken much longer than the 2-week spell he was originally expecting:

“I've had a hamstring injury before, it's a common injury in football,” said Broadhead when asked about his recovery process. “You have to take time and I was meant to be out for 2 weeks but I felt a little bit in there so I rested a few more weeks to get it right.

“I have done it before and I know what it's like so you just have to pull yourself through and build myself up again. This is a stepping stone for the rest of the season. It was a difficult time out and I've worked hard in the gym to try and get my fitness up. Hopefully I will be rewarded.”

He scored his second goal for the Black Cats to earn the point they needed against Bradford to go through to the knockout phase of the Papa John's Trophy as group winners. He was withdrawn soon after scoring and could not help as they lost the penalty shoot-out and an extra point.


Since returning from a hamstring injury, Broadhead became a regular in the Sunderland starting XI, and had six goals in 15 appearances across all competitions by mid-December. But after scoring in a cup-tie against Arsenal, Broadhead suffered yet another hamstring injury sustained as he went to ground under pressure from a Gunners defender.

However, Broadhead was deemed fit enough to return to Sunderland at the end of February after 2½ months out, only to suffer problems in his first match back, at Charlton, and he would miss the next 2 games with stiffness in his hamstring.

But he would return for the last 7 games and his 5 goals would move Sunderland into 5th place and the playoffs, which they would go on to win, with Broadhead coming on only as very late sub due to mire injury problems.

Broadhead would return to Everton with 1 year left on his contract, and lost of talk of a move to Sunderland.

*On Season-long loan at Burton Albion