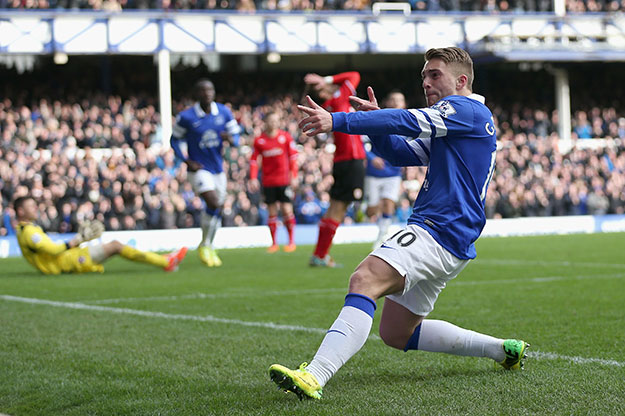 It was quite a coup when Everton were able to confirm that Barcelona wonderkid, Gerard Deulofeu, was going to be spending a whole season on  loan with Everton — thanks in no small part to Roberto Martinez's Catalan connections.

"Gerard is a real diamond of Spanish football and a boy with incredible footballing talent and I am delighted that he has chosen to take the next step of his career with Everton," Martinez said upon landing the 19 year-old in July 2013.

Deulofeu was largely considered one of Spain's most promising young talents, a player with the ability to emerge as one of the world's greatest, one whom Barcelona felt had the potential to be a long-term fit for their club.

Dazzling displays at the Under-20s World Cup tournament in Turkey and for Barcelona B side attracted attention Europe-wide, but Martinez won the race to secure a talent to get really excited about.

Equally adept at playing out wide or in the number 10, trequartista role, the young forward was gradually introduced to the first team as the 2013-14 season progressed, making his senior debut in the League Cup against Stevenage where he scored the opening goal.

Pacey, with quick feet and acceleration, Deulofeu, became an exciting – if somewhat mercurial – weapon for Everton, often coming off the bench to tremendous effect. Arguably his most memorable moment came at The Emirates against Premier League leaders Arsenal in December 2013. The teenager came on as a second-half substitute and scored a stunning late equaliser to earn a draw.

Martinez continued to use Deulofeu's precocious talents judiciously as the season progressed, frequently rotating him with Kevin Mirallas and January acquisition, Aiden McGeady, to keep his attacking players fresh in the second half of the campaign. He weighed in with three goals in all – not including his role in an own goal by Sunderland's Wes Brown that secured a record seventh consecutive Premier League win – while still demonstrating that he had room to grow if the Blues could secure him for a second season.

In his halting progression with Everton, Deulofeu had shown some of the dazzling technical ability required to bamboozle good quality defenders, especially in tight areas, which is where he operated best. His quick feet and exceptional pace were a huge advantage for knock-and-run where there were yards of space behind a defender.

He was prone to over-elaborate, though, his end product was not consistent enough, and he demonstrated that he still had plenty to learn, particularly on the defensive side of his game.

He was recalled to Barcelona by new manager, Luis Enrique in the summer of 2014 for assessment and won his first cap for his country against Bolivia but he was not deemed ready to be part of the either Spain's World Cup squad for Brazil or the first-team at the Nou Camp for the following season.

In August 2014, it was confirmed that Deulofeu would spent a season-long loan at Sevilla, hinting that he did not have a chance at Barcelona for the time being.

The Riudarenes-born player's experience at the Ramón Sánchez Pizjuán Stadium was mixed, however, and he would find himself a largely peripheral figure over the second half of the season as Sevilla went on to win the Europa League.

Sevilla boss Unai Emery spelled out his issues with the player when he said in May 2015 that, “[Deulofeu] has incredible qualities, but also a lot of deficits. He can do one vs one but.. playing with team-mates, in a big stadium, it's complicated. He isn't mature enough yet and needs spirit of sacrifice".

With Deulofeu's prospects of breaking into the Blaugrana's treble-winning team still slim and while he insisted that he was not interested in a third season away on loan, the door was opened for a return to the Premier League in the summer of 2015.

Though there were reputed to be more lucrative offers on the table from other suitors, Gerard elected to return to Goodison Park and rekindle the love affair with Everton's supporters, sealing a €6m transfer by signing a three-year contract that would come into effect on 1 July 2015. Barcelona hedged their bet, however, with an exclusive €12m buy-back clause that would given them first option until June 2017. His second debut, however, was delayed after he was one of numerous players to sustain a hamstring injury during pre-season, making him miss the Goodison season opener against Watford.

After some promising spells in matches once he was deemed fit enough to play, he began to show flashes of the direct running and Ronaldo-esque step-overs, and swung in crosses that had made him such an exciting prospect when he first arrived at Goodison two years before. His end-product remained hit-and-miss, however, despite a brief spell in the first half of 2015-16 where it seemed as though he had solved Everton's service problems to Romelu Lukaku. And in the second half of what proved to be a hugely disappointing campaign, his appearances became fewer and even less productive until his season was ended early when he suffered a grade one tear of his medial knee ligament after a freak training ground accident with Oumar Niasse.

Deulofeu recovered to play his part in pre-season preparations under new manager Ronald Koeman after which he took up the more iconic shirt number 7 relinquished by Aiden McGeady, his third in as many seasons with Everton but he continued to find consistency hard to come by.

After being deployed as a makeshift centre forward by Koeman at the start of the 2016-17 season in the absence of Lukaku, Koeman resorted to rotating him with Aaron Lennon and Kevin Mirallas in his more familiar wide role, searching for a reliable attacking combination. Deulofeu's involvement became less and less frequent, however, and he was eventually signed on loan until the summer of 2017 by AC Milan that January.

The Spaniard did pretty well at the San Siro with 4 gaols and 3 assists, and thought he'd found a new home, with Milan manager Vincenzo Montella saying: “Deulofeu has had an amazing impact at the club but he has to leave now. He may return here in the future because he's had a great season here. We have given him an important chance here at AC Milan and he has taken it all, he has shown all his qualities.”

Milan were prevented from offering him anything while there was talk that Barcelona were thinking of exercising their exclusive buy-back clause in his Everton contract. As Montella put it, "Deulofeu has given us a lot and he's a had a great impact. His fate isn't up to us, but I think all players are replaceable – as are coaches."

Despite a lot of baseless speculation that he would not relish a return to Barça, the man himself thought otherwise: "I am very happy to be back at Barcelona," Deulofeu told reporters after captaining Spain Under-21s in their European Championship final defeat to Germany.  "It is my home and it was a shame I could not go back sooner. It is already decided. This year I will stay at Barça for sure. I am ambitious and I want to play with the best. I am very happy to have this opportunity that I have never had, to play in the first team of Barca."

Barcelona triggered the buy-back clause on 30 June 2017 and he officially re-signed for the Blaugrana a few days later. But things didn't go all that well for Deulofeu, and he would return to the Premier League, signing for Watford on a permanent deal for a reported fee of €13 million after spending the second half of the  2017-18 season at Vicarage Road loan.