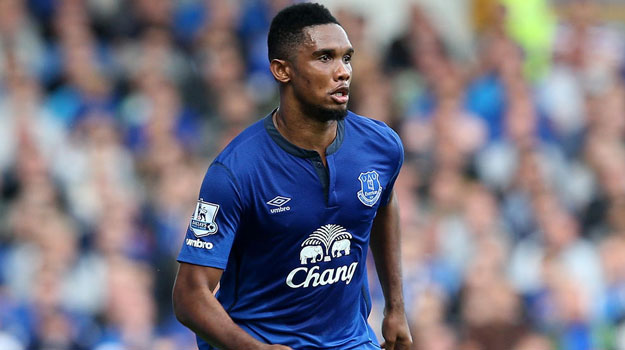 Although Everton's 2014 close season had been lit up by the marquee signing of Romelu Lukaku is a club-record £28m deal, Roberto Martinez's squad was still visibly lacking in striking depth. As the transfer deadline approached at the end of the summer, Arouna Kone, sidelined since the previous October with a serious knee injury, had still not proved that he would be able to provide reliable cover to Lukaku and Steven Naismith so Everton moved to bring in Samuel Eto'o on a free transfer.

At 33 years old, the internationally renowned Cameroon striker had been released by Chelsea after just one season and yet he had still managed to continue his phenomenal scoring record over the previous decade by notching nine goals in 21 appearances at Stamford Bridge.

Having won the Champions League three times and played in Spain, Italy and Russia, Eto'o promised to bring considerable European experience to an Everton squad preparing to return to the Europa League for the first time in five seasons. And by negotiating a considerably reduction in the player's previous salary in return for a two-year contract, the club had brought in a proven goalscorer on reasonable terms.

Originally part of Real Madrid's youth academy, Eto'o rose to prominence during a four-year spell at Mallorca before making a big-money, €24m move to Barcelona in 2004. There, coupled with his goalscoring exploits for his country, he gained international fame, scoring 108 goals in 145 appearances for the Blaugrana.

In 2009, he was transferred to Internazionale in an exchange deal involving Zlatan Ibrahimovic and he continued his phenomenal strike-rate at the San Siro, notching 33 goals in 67 games in Milan.

Two seasons in the Russian league with Anzhi Makhachkala added yet more experience to Eto'o's CV where he struck 25 goals in 53 appearances, before Roman Abramovich came calling with a one-year deal that would help usher Romelu Lukaku out of Stamford Bridge on a season-long loan to Everton a year ago.

Eto'o retired from international football in 2013 but returned shortly thereafter and was a member of Cameroon's World Cup team in Brazil this summer. It was announced on the day he put to paper on his contract at Finch Farm that he would no longer be his country's captain, a move that prompted him to call time on his international career again, thereby leaving him available to Everton in January during the Africa Cup of Nations. As it turned out, he would not play for the Blues at all that month as the wheels were greased for his premature departure from Goodison shortly before the transfer deadline.

Though the presence of such an accomplished star of world football in the Everton ranks was considered an impressive coup, and was hoped that magic from the Cameroonian could be the spark that would get Everton back on track to finishing among the coveted Champions League places, Everton's season derailed spectacularly over the first half of the campaign.

Eto'o scored with virtually his first touch against his former club, Chelsea, in September, notched an impressive brace against Burnley in a 3-1 win later that month and grabbed a vital equaliser in Krasnodar, but he became increasingly elss effective as either a starter or impact substitute as 2014 wore on.

This coincided with a dreadful run of form as Martinez's second-season syndrome took hold with a vengeance through the middle of the season.  Talk surfaced of a possible falling out with the manager and Eto'o being a disruptive influence in the dressing room who was interfering with coaching guidance on the training field, leading to increasing speculation that he would move on earlier than expected.

His contract with Everton reportedly included a clause that the second year of his two-year contract would automatically kick in once he had made 15 starts for the club. But with a weekly salary of around £60,000, he became an expensive luxury to have sitting on the bench, particularly if there was any truth to the murmurings of him fostering dressing-room disharmony, openly criticising the manager and putting down the club. No longer able to perform consistently as an out-and-out striker, Eto'o was unable to command a regular role in side as his manager attempted to juggle him with Steven Naismith and Ross Barkley in the No 10 role, often playing two of them together behind main striker Romelu Lukaku.

So it was no surprise when reports emerged in January 2015 suggesting that Eto'o was negotiating a return to Italy's Serie A with Sampdoria. Initially, Martinez refused to be drawn on the speculation, insisting that Everton would take their time over the remainder of the transfer window to decide what was best for both parties.

But with Eto'o now absent from the squad entirely, his mind seemingly made up, and his agent, Claudio Vigorelli, swiftly concluding negotiations over a 3½-year deal in Genoa, the transfer was eventually completed a week before the deadline. Though the final terms of the move were not officially disclosed, the deal was reported in Italy to involve appearance and performance-related clauses to compensate Everton in lieu of a nominal transfer fee.

In all, the decorated Cameroon star made 20 appearances for the Blues, scoring four goals in all competitions in a campaign that promised much for both player and club alike but which had not gone according to Martinez's plans.