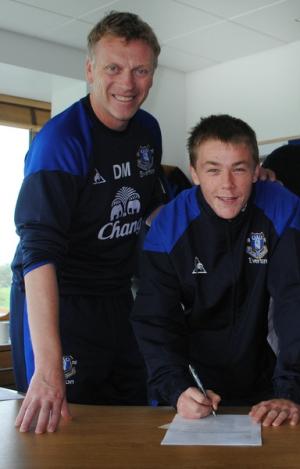 Academy director Alan Irvine said he was looking forward to working with highly-rated teenager George Green after the club agreed a deal with Bradford City in October 2011 for the youngster to join the Toffees’ youth set-up the following summer.

The 15-year-old, from Dewsbury, was an attacking midfielder had been linked with the likes of Tottenham and Bayern Munich, but Everton got there first with a reported initial bid of £280k in a deal potentially worth £2M to the Bantams, and an incredible £45k signing fee for the youngster.

“George is a young player who was attracting interest from a number of clubs,” Irvine told evertonfc.com. “He has got good potential but at the moment that’s all it is. He has got a lot of work to do and he knows that. We’re happy to have him and we’re looking forward to working with him here at the academy.”

Green had a medical with Everton the Monday after the infamous derby in which Martin Atkinson wrongly sent off Jack Rodwell when Liverpool cheat Suarez dived and yelped in agony after a far challenge for a 50/50 ball.  Green completed the signing the following day, with the benefit of a £45k signing on bounus, despite renewed late interest from Tottenham, and it appeared that he would move to Finch Farm straight away with talk of him playing in the next Academy U-16 game — versus Liverpool!

But it was revealed that Spurs made an end run to gazump the Blues when joint-chairman of Bradford City, Julian Rhodes said: “Spurs came in with a bigger offer but we were more than happy for him to stay with Everton and honour the agreement we’d got. George had settled in there and made it clear he was happy to be an Everton player.”

Following a brief cameo after he arrived against Wolves, he would became a YouTube sensation among Evertonians for a spectacular back-heeled volley in match for Everton U-16s at Warrington.

George had to wait until later in the season before starting to find his feet amongst his seniors on the Under-18 Academy side, with just four more runouts as a second-half sub. He also came on for the Reserves in the second-half of the Liverpool Senior Cup Semi-Final at Bootle and changed the game, setting up the equalizer for Hallam Hope and scoring one of the penalties that would enable Everton to go through to the final on the back of a 6-5 penalty shoot-out win.

His progress through the Everton Academy was stalled for a while as he did not seem to be getting the games or exposure a young protégé of his prodigious talent should be getting.  But later it would be revealed that the £4k/wk he was being paid had gone to his head, and he wasn't putting the effort into training. Later, there was talk of a serious back problem, and that kept him sidelined for quite a while.

In Season 2014-15, he did go out on loan, but only to locals Tranmere Rovers, who were struggling in League Two.  Ex-Tranmere boss Mickey Adams labelled him as a “little magician” earlier this year when he scored a spectacular injury-time equaliser that looked like it might spark a push away from relegation for Rovers. But Green couldn't hold down a starting role and was unable to prevent the inevitable, despite scoring the odd wonder goal, with his temporary teammates suffering the supreme ignominy of being relegated from the Football League.

The news for Green himself would not be much better as he saw his Everton dream turn into the ultimate nightmare of being released by the club in June as surplus to requirements. There were unconfirmed murmurs of off-field issues and 'attitude' but the sad indictment of yet another much vaunted young star unable to fulfil his tremendous potential would be the lasting legacy.   Green would go on to sign for Oldham under the recommendation of Joe Royle.

But he didn't last long there, playing in just 4 games before he was let go. The League One club issued a two-line statement on their website in early November 2015 saying: "Midfielder George Green has been released from his contract by mutual consent. We wish George all the best for the future."

That future would see him next playing for Ossett Albion as he returned home to Yorkshire and a more humbling wage of just £75/wk for the Northern League side.  Recalling his torid time at Everton, he told The Guardian in 2015:

“It went straight to my head. I just went out and blew the signing-on fee,” he remembers. “You’re earning thousands of pounds a week and you get more leeway than other players. You don’t want to take liberties but I took more than one.”

Green was playing games for Everton’s Under-21s within a few months of his arrival such was his potential. But as the money rolled in he admits he found it hard to maintain his focus.

“I wasn’t going into training because I thought I was better than everyone else,” he says. “Being an idiot. Being an absolute idiot, if I’m honest. I wasn’t turning up sometimes because I wasn’t enjoying it and I thought I could do what I wanted. When I did go in, I was training absolute shite. When you’re playing at that standard you can’t do that. It’s a better game than that.”

The arrival of Roberto Martínez in 2013 to replace David Moyes appeared to offer Green hope but a hernia injury meant he fell down the pecking order and spiralled into depression. There were even message-board rumours that he had checked himself into rehab.

“It was nothing to do with drink or drugs,” he says. “I suffered really badly when things started going wrong on the pitch. I wanted to take my life a few times. There were a couple of bad stints but now I’ve come out of them stronger,” he says. “I was expected to make the first team at 16 and then win an England call-up. But if you have one bad game then you start having people question you and asking why you aren’t progressing. It did all get too much because I was only doing the best that I could.”

“They did everything they could but unfortunately I threw it back in their faces,” he says. “Everton knew I had ability but they wanted to see that I could be more professional and unfortunately I didn’t show that.

“I was sent to see a psychologist to get my head right but he didn’t really help. He gave me some tablets which I didn’t take because I didn’t want to be known as someone who needed that to feel right. It all hit me at once. I pushed away all my friends and family because you don’t realise they are there to help.”

“The people behind the club didn’t understand how I worked as a player so it got to a stage where I thought it’s not about the money,” he says. “If a manager shouts at me, I won’t respond. I’ll tell them to fuck off and walk off. Whereas if they put their arm around me I react differently. It has had a negative impact on my life in some ways but it was important to me to find happiness again. I just wanted to go back to my old roots and start enjoying the game again.”

Things appeared to be looking up again when he moved to Turf Moor in January 2016 after having spent a week on trial at Burnley’s Gawthorpe Hall training ground. Green was handed an opportunity to impress in a practice match against Loughborough University. He scored within 30 seconds and went on to record a hat-trick in a 5-1 win. “I’m absolutely buzzing,” Green said. “I went in there just to try my best –  I loved it and had a really good week, ending with scoring the hat-trick so it couldn’t really have gone any better.”

“I can totally understand that. I’m just happy to be back in the game – I’d have gone in for free if I’d had to. If I get my head down and work hard then I’m sure I will get my chance.

“I’m not going to mess it up this time. I’m ready to be a footballer now. Everyone knows my story now. I’m very grateful for the opportunity because I had nothing a few weeks ago. Now I’ve got to get my head down and put the work in.”

He did enough in the Burnley development squad to secure extended terms and went to Kilmarnock on a 6-month loan at the start of 2016-17, playing four games in the Scottish Premiership, but he returned to Burnley after just a month.

His latest move was to join lowly Salford City, proud members of the Vanarama National League North, on loan in January 2017 but he only managed three appearance there in five months. He returned to Burnley only to be released at the end of his contract, age 21, having never played for their senior side.

While at Nuneaton, he gave another long and  soul-searching interview on his struggles with depression and addiction, this one with the Daily Mail in April 2018, in which he admitted trying to take his own life while on loan at Salford City.  He went into greater detail later that year when he spoke at length with Neil Johnston at BBC Sport in September 2018.

He left Boston Utd in July 2020, having made a total of 8 appearances, 5 off the bench, and scoring once. In November 2019, he signed for Ossett United on a non-contract deal, Green’s dream to return to the stage he once starred on is still alive.

The former prodigy also hopes one day he can help young footballers who are struggling in the position he was in. He said: “There are things that are put in place but until clubs stop giving people loads of money, I don’t see it changing.

“I think I would really enjoy that if the opportunity presented itself. My Twitter is always open for anyone who would like a chat. I will always try and help.

“I would like to have that chance (to sign for a professional club). I am working hard on and off the pitch so it would be top of my agenda if it came.”

In the meantime, Green has started training as an electrician.