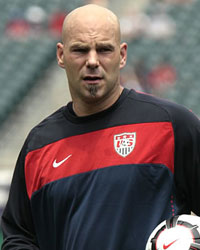 There were puzzled expressions when David Moyes decided to snap up the aging American keeper Marcus Hahnemann as additional cover for Tim Howard in September 2011, considering that Jan Mucha had hardly been called upon.

Graduating out of Seattle Pacific University, he played for the Seattle Sounders between 1994 and 1996.  Between 1997 and 1999 he turned out for the Colorado Rapids, signing with Fulham in 1999.

He has won nine caps for the United States, featuring as back-up for Kasey Keller and Tim Howard in two World Cups. Following his debut for the States in 1994 he played two further games within the same month; however, he had to wait almost nine years before his next international appearance.

Unable to become the first-choice goalkeeper at Fulham, he enjoyed loan spells with Rochdale and Reading, before signing permanently with Reading in 2002. In 2009, following 276 league appearances for the club, he transferred to Wolverhampton Wanderers.

However, the 2010–11 season saw the team enter a dismal run of form that left them bottom of the league and in danger of relegation.  Hahnemann was dropped after a defeat to relegation rivals Blackpool in late November and did not feature again. He was released at the end of the campaign, after the expiry of his contract, and it was as a free agent that he joined Everton some months later.

It was some time before he made his first appearance for Everton on the bench, where he remained as one of four unused subs in the FA Cup 3rd Round win over Tamworth.

And he continued to appear on the subs bench for each subsequent FA Cup game in the run that would take Everton to a Wembley semi-final and an ignominious defeat to arch rivals Liverpool after taking a somewhat fortuitous lead and then trying to sit on it.

But with Tim Howard determined to appear in every senior game, Hahnemann would never get onto the field in an Everton shirt and was released at the end of the 2011-12 season, a completely unnecessary appointment in some eyes.