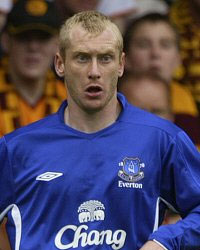 Tony Hibbert's rise into the Everton first team came as no surprise, as he had been a consistent performer for Everton Reserves in the late nineties.  He was also a member of the  Blues' 1998 FA Youth Cup winning side.  He originally played in midfield, but quickly adapted his game to suit the right-back spot.

As he matured, he developed into a solid and dependable presence, a mainstay in David Moyes's squad during the first few seasons of his managerial tenure. Quick and an impressive exponent of the art of jockeying and last-ditch tackling, "Hibbo" emerged as an unspectacular but reliable performer in the Everton jersey and was at one point being put forward as a potential England international.

Tony's hard work and consistency in the Reserves was shown in his impressive debut for the Blues away at West Ham, in a 2-0 win in 2001.  He was calm on the ball as well as showing his willingness to come forward, and winning a penalty which helped the Blues to a vital win.

Soon afterwards against Bradford, Hibbert showed he was a natural at right-back.  He was cool and confident, effective, and keen to get forward, getting down Everton's right wing to put crosses in.  But Walter Smith overlooked this young talent and he didn't figure again that season.

Tony finally started to make inroads into the first team as the 2001-02 season developed, with some excellent appearances against Liverpool and Blackburn that really put the supporters behind him.

Early in the 2002-03 season, Everton made a great media play out of tying a pair of ex-youth players with immense promise into long-term contracts.  An uncomfortable Wayne Rooney was placed squarely in front of the throng of assembled journalists, desperate to hear what he had to say.  Tony Hibbert was also there.  In true Hibbert fashion he just turned up, got on with his job out of the limelight, and left without a fuss.

In the current game, the traditional threat of the winger has very much been nullified by the pace of the modern full back who must have the awareness to contend with late runs from midfield and early runs into the channels from forwards. Hibbert has always had the pace, the mobility and the know how to do this, is never easily beaten and, once opposing players have the measure of him, they know they are in for a hard game if they want to get past him.

The fact that England never came calling was perhaps down to his attacking limitations which have always seemed to prevent him from becoming the complete fullback. His long-ball distribution, one-dimensional approach when going forward, somewhat erratic – though improving – crossing, and limited vision have at times made him something of a scapegoat, particularly as Moyes steadily ramped up the quality throughout the squad.

Nevertheless, his future at Goodison never really looked in question, even when Phil Neville was signed from Manchester United in 2005 and began to offer the side a more rounded game. Hibbert succumbed to a knee injury soon afterwards, however, that would sideline him for months, by which time Neville had become the favoured choice in that position.

With Everton becoming a force to be reckoned with in the top half of the table in the 2007-08 season and Moyes looking to add more quality to his ranks, Tony settled into more of a squad-player role as the Blues powered their way into the latter stages of the Uefa Cup, filling in when Neville was required by injury and suspension elsewhere in the side to move into midfield.

Then, against Arsenal he continued to play after suffering medial knee ligament damage and the subsequent surgery put him out of action for four months, well in to the 2008-09 season.

That campaign was affected by injury, which was used as an excuse for some memorably lacklustre performances, none more so than the FA Cup Final, when Florent Malouda tormented him in the Wembley heat and prompted him into a rash trip that earned Hibbert an early yellow card. He was hauled off at half-time, but the damage had been done, and Everton could not deliver, despite scoring the early goal.

Hibbert recovered from this and stepped up the next season, deputising at times in central defence when the team was ravaged by yet another injury and selection crisis. The home-grown Blue even got the chance to don the captain's armband and become Everton's leading player in Europe with 20 appearances under his belt after he captained a team of kids against BATE Borisov in the final match of the Blues' Europa League group phase.

Out for a couple more months with an injury until March 2010, Tony seemed to have a new lease of life when he recovered — perhaps after watching the exploits of his understudy Seamus Coleman, who epitomised the new breed of full-back that also can perform the wingback role.

Hibbert began his eleventh consecutive season as a senior Everton player in 2010-11 but it turned out to be stop-start as he had been suffering with an ankle injury, which limited him to few first team appearances since October.  But, after sitting on the bench through the middle of the season, midfield injuries once again forced Moyes to move Neville forward and Hibbo was back in the team.

His form was good too, and he was happy to celebrate his 10-year anniversary as a senior player – despite never having scored a goal, a record for an Everton outfield player — and continued to hold down a first-team place the following season, 2011-12, as the last member of Moyes's first match in charge still playing with the Club.

He was honoured going into his 12th year at the club with a testimonial against AEK Athens – a game in which he famously scored from a free kick – but he made just 10 appearances over the following two seasons as injuries continued to blight him in his early 30s. Nevertheless, that did not stop Roberto Martinez granting him a two-year contract extension, through 2016.

Everton's longest-serving player at the time would go on to have rather a difficult 15th season with the Blues first-team, although he played more times than in the previous two seasons combined. Even wasn't on the pitch much because of a long-term injury his influence in the dressing room was not long on his manager:

“It is a good job that he has that experience and that he is part of the furniture at Finch Farm in the way that he is Mr Everton, so that helps,” Martinez said, when asked if Hibbert has found it tough being out for so long.

“But it has been a frustrating period for him. He has had some of his most impressive performances in the last two years and I will always remember his performance against Wolfsburg away from him – that was Tony Hibbert at his very, very best."

But a knee injury would lay him low just after pre-season training got under way in 2015, and he was sidelined for months. The veteran defender didn't feature at senior level until near the end of the season but he played the first 45 minutes for the Under-21s in April as they beat Manchester City 1-0 at Goodison Park.

He then appeared for what could be his final game at the end of a long and loyal career as a fan favourite at Goodison Park when he substituted for Muhamed Besic at half-time against Bournemouth to a great reception from the crowd, and gave an object lesson in the art of solid defending.

He suffered another injury shortly afterwards, however, and was released by the club along with his '98 FA Youth Cup team-mate Leon Osman when his contract expired in June 2016.