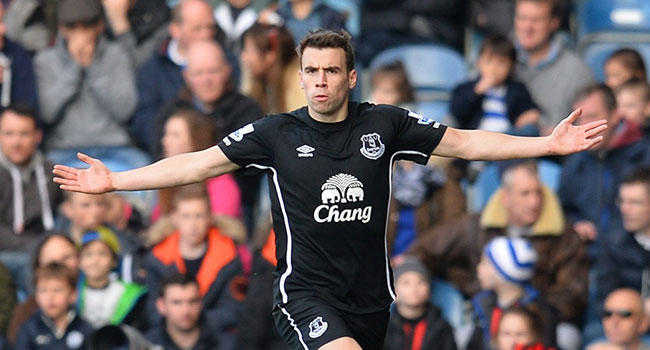 Signed from Sligo Rovers in February 2009 for a paltry £60,000, it would later transpire that things could have been very different for Seamus Coleman.  He had trialed under Owen Coyle at Burnley but picked up an injury that curtailed any further assessment... until he was fit again and Everton came along to snap him up for the bargain fee that would quickly represent one of the biggest bargains of the Premier League era.

The Donegal-born defender started his Premier League education with an apprenticeship in Everton's Reserves but by the 2009-10 season he began to show the promise, both in terms of attitude and talent, that would eventually see him blossom into arguably best right back in England's top flight.

His initial progress was delayed by complications from an infected blister in the summer of 2009 and it would be some months before Seamus recovered. And when he was finally fit enough to be part of the first-team squad, he was given a baptism of fire at the Estadio da Luz where an injury-ravaged Everton were mauled 5-0 by Benfica, with Coleman deployed in an unfamiliar left-back role.

After a couple of subs' appearances, Coleman would eventually make his mark in David Moyes's first team against Tottenham at Goodison Park when he came on as an early substitute for the injured Joseph Yobo.

He  moved to right back, where he showed some some solid determination and excellent drive, playing a vital role in setting up both of the goals that hauled Everton back from the dead in a memorable match full of action and drama.

Coleman became something of a talisman for his great attacking prowess, but Moyes resisted the temptation to use him more, shipping him off on loan to Blackpool for the rest of the season, where he helped them win promotion to the Premier League.  As a prelude to his future deployment, however, a new four-year contract was agreed in May 2010.

In the 2010-11 season, Coleman finally got a chance to play for the senior side, and was a breath of fresh air, running fearlesslely at opposing defences and cutting inside from the right, often to lethal effect.  Moyes decided that his best position might not be full back at all but attacking right midfileder, and that's where he excelled for that season.

His progress stalled, though, in 2011-12, the Irishman suffering a bout of "second-season syndrome", not helped by damaged ankle ligaments that he suffered in a pre-season friendly against Villarreal that would keep him on the sidelines for the next two months.

He would be in and out of the side for the rest of the campaign, with a troublesome thigh injury, the return of Landon Donovan and the mercurial talents of Royston Drenthe restricting him to 17 starts in all competitions — and, tellingly, no goals.

An injury to Tony Hibbert gave him an opportunity for an extended run at right back from September 2012 but erratic form made for a somewhat disappointing campaign in Moyes's final season in charge at Goodison Park. Nevertheless, he continued to stand in and occasionally do the business in place of the injured Tony Hibbert, and was rewarded with a new 5½-year contract on New Year's Day 2013.

It was under Moyes's successor, Roberto Martinez, that Coleman, now an established Republic of Ireland international, fully blossomed into one of the most feared fullbacks in the Premier League.

In 2013-14, having matured in all parts of his game, he scored six goals from right back, some of them truly stunning efforts in a season packed with spectacular goals, and he was deservedly named Everton's Player of the Season following a campaign that ended with the Blues qualifying for the Europa League for the first time time in five years.

Coleman had firmly established himself as a key member of the team, even attracting covetous glances from the direction of Old Trafford, and his influence was sorely missed when hit by injury after the beginning of Martinez's second season. Coleman missed a series of matches, first with a concussion suffered against Wolfsburg and then a muscle injury but in a season that was disappointing for the Blues in general, he wasn't able to find much consistency when he did return.

Martinez struggled to replicate his impressive debut season at the Everton helm and a more conservative possession-based approach seemed to stifle Coleman's attacking instincts. He would weigh in with five goals in all competitions but, overall, he struggled to reach the heights that had made him tabloid fodder for transfer stories involving the likes of United and Chelsea the year before.

His stock remained high enough that baseless of an impressive £20m bid from Paris St Germain surfaced in August 2015 but, with Everton robustly resisting interest in any of their star players, he was never likely to leave and he continued to be a vital member of a squad that started out well enough amid ratcheted up expectations in 2015-16 as the Blues' attacking machine started to click, albeit to a degree at the expense of solidity at the back.

However, in a trend that hasd begun in 2014-15, Coleman's wings appeared to be seriously clipped by Martinez's declining reliance on his two attacking fullbacks in what would end up being a disastrous season personally for the Catalan. Just one league goal that season was evidence enough of the Irishman's declining form in an increasingly dysfunctional team whose poor results between January and May 2016 would eventually result in Martinez's dismissal.

Coleman remained an automatic choice for his country, however, and played in all three of Ireland's group games at Euro2016, setting up their first goal of the tournament with a trademark run to the byline and chipped centre that Wes Hoolahan converted in a 1-1 draw with Sweden.

Coleman became the  obvious first-choice right-back under Ronald Koeman after missing the first three games under the new manager with an  ankle injury. He then played every game,  even though the new manager did not seem to encourage his forward forays quite as much as previous managers, despite him scoring five Premier League goals and laying on three more.

But that was abruptly ended during a fateful International break in March 2017 when Ireland met Wales in a fractious affair that saw Coleman break his leg as a result of Neil Taylor's wild lunge for a 50-50 ball. It was a  stunning blow for Ireland, for Everton, for the hugely popular player most of all... and for Evertonians who reacted with seething anger at the unnecessary injustice of what was a horrific double leg break.

The long period of recuperation began after the bones were pinned back together, with Seamus not expected to return before January or February of 2018.  He went back home to Ireland for the first month and manager Ronald Koeman would visit him early in his recuperation, with Everton confirming a new five-year contract. Additionally, he was granted the Freedom of Donegal as he looked to return to footballing action by the end of 2017.

His first full match back was against Leicester City at the end of January 2018, and he seemed driven by an irrepressible spirit as his energy and determination gave Everton unfamiliar tenacity and desire to secure a welcome and much-needed victory over the former Premier League Champions.

With Phil Jagielka also returning, greater experience and solidity at the back gave an air of respectability to the results under Sam Allardyce after Koeman was sacked in October 2017 and there was a chorus of calls for Seamus to be made captain of the side as supporters yearned for bit more "nark" from their skipper.

Koeman's long-term replacement, Marco Silva, did make Seamus captain for his 200th Premier League appearance but a stress fracture to his foot sustained on international duty disrupted his season and he went through a prolonged dip in form before coming out the other side seemingly back to something approaching his best by the end of 2018-19.

Coleman continued as club captain for the remainder of Silva's abortive tenure and the arrival of Carlo Ancelotti in December 2019 and was still in place to kick off the Italian's first full season in charge in September 2020, despite Jonjoe Kenny returning from Germany.  But there was no substitute for Coleman's passion and commitment, even when his legs would let him down.

And in a statement of mutual admiration, new manager Rafa Benetiz was highly complimentary of Coleman and his role in the team, the player agreeing to a further 1-year extension of his contract at the end of July 2021 that extends his commitment to Everton through June 2023. This despite a further fruitless search for his ultimate replacement at right-back over the Summer transfer window, with bids for Denzel Dumfries and Nathan Patterson failing.

The need for that replacement was soon brought home as Coleman sustained a hamstring injury while playing for Ireland in the second of two World Cup qualifiers in 3 days, returning to Finch Farm for assessment. But Coleman would go on to be both a liability and an inspiration as the games he played in lurched from catastrophe to celebration – the penultimate game against Crystal Palace providing the points that would finally keep Everton in the Premier League after an abysmal season. And Nathan Patterson did arrive in January 2022, but failed to provide cover due to a serious injury.

It was later revealed that he had been plagued by a hernia problem which required surgery in the Summer of 2022, threatening his availability for the start of the new Premier League season.