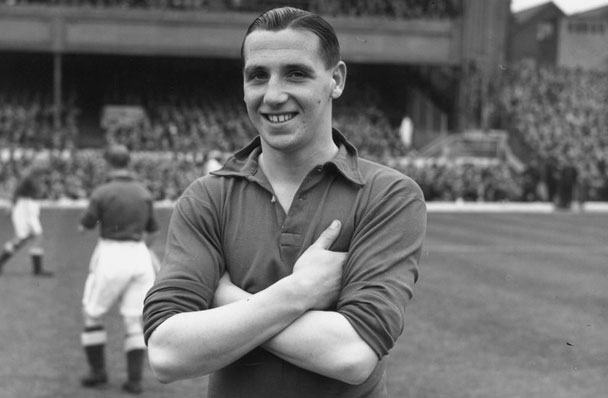 It was in 1934, ironically at Anfield, that a 15-year-old Tommy Lawton shot to prominence when playing for the youth team of his home-town club Bolton Wanderers.  Liverpool were immediately alerted to his obvious talents, but, under the guidance of his grandfather, Lawton instead joined Burnley.

By the age of 16 he was a regular in the Turf Moor first-team, and already scoring frequently.  Naturally the bigger clubs, including Liverpool once more, started sniffing around.  However, Lawton's grandfather was a shrewd man.  He was mindful that the legendary Everton striker Bill "Dixie" Dean was approaching the end of his career at the club, and that there was probably none better to hone the prodigious talents of his grandson.  A fee of £6,500-astonishingly high at the time especially for a raw teenager, took the 17-year-old to Goodison Park.

Amid all the fuss over the size of the fee, Lawton himself was one of the few who remained calm – an attribute which marked him out on the pitch as well as off it.  Though he was a player who never shirked a challenge, neither did he ever lose his cool and as a result was not so much as booked in a 20-year career.  Even when he scored, which invariably delighted the fans, he simply ran back to the centre-circle with just a wave of appreciation to the crowd and got on with the game.

Dean took the arrival of his obvious replacement graciously, promising to teach the newcomer everything he knew, and so Lawton, the new king of Goodison Park, succeeded Dean, the former king.  They actually played together in a handful of games during 1936-37, Lawton's grounding year in top-class football, but the following season Dean was for the most part out of the team and Lawton had the striking stage to himself.  He scored 28 goals in 39 matches that season, and the following campaign went even better as he netted 34 times in 38 matches and Everton were Champions.

Lawton, still only 19, was generally acknowledged as the star in a team full of stars such as Ted Sagar, Joe Mercer and Tommy G Jones, which was, according to many experts, the finest ever seen in England.  Nobody will ever know what they could have gone on to achieve after 1939, as the Second World War intervened.  What should have been an even more glorious career was stunted just when it was taking off, although Lawton, like many players of the era, continued to play in what low-key football there was at the time of hostilities.

He never again played in earnest for Everton, though.  In November 1945, before the League could get back on its feet after the end of the war, Lawton dismayed Evertonians by signing for Chelsea.  Those who were fortunate to have seen him in an Everton shirt realised just how privileged they were to have done so.

The great Tommy Lawton died in late 1996.  The amount of media attention surrounding his death at the age of 77 might have surprised the younger generations, but those who saw him play will confirm that it was fully deserved by one of England's and Everton's finest ever players.