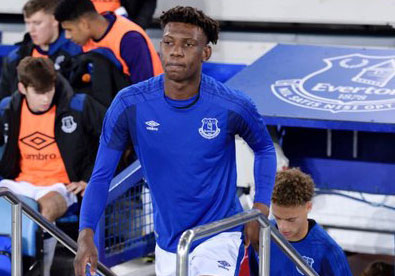 Mampala joined the Finch Farm Academy on a 2-year scholarship at U16 level and hit 12 goals in 18 appearances in the U18 Premier League in his first season. The 17-year-old also figured twice for David Unsworth's U23s.

He also showed a creative aspect to his game as well in laying on six assists over the course of the season. Mampala was a key part of the Everton side that finished 5th in the North division, with it surely just a matter of time before he earned regular football for the development squad, and maybe even the first team.

The Congolese-born player secured his first professional contract with the club in July 2018 in recognition of his impressive form for the Under-18s during the 2017-18 season and he was keen to make an impact at Under-23s level as the next step in his progression.

“It feels great to sign the contract and I'm just delighted the hard work I've put in has paid off,” he told evertonfc.com.

“Last season was good for me and it was great to get a couple of games for the Under-23s - hopefully I can play more games for them and score some goals.”

However, he didn't play that many games during the following season, and scored even fewer goals, coming up second best in competition with Bassala Sambou for the striker's role in David Unsworth's double-winning side. Yet he did enough to earn an additional one-year extension to his contract and, with Sambou turning down a contract offer of his own, Manassé looked set for a greater chance to establish his goal-scoring credentials at this level.

Yet it would be Ellis Simms, stepping up from the Under-18s, who would get picked and produce the required end-product and Mampala's limited contribution saw him register just a couple of goals during the campaign as he struggled for full games, getting to play for all 90 minutes on just one occasion in the entire season.

It came as no surprise, then, to hear that his contract would not be renewed again and he would be released in June 2020 without ever featuring for the senior side.