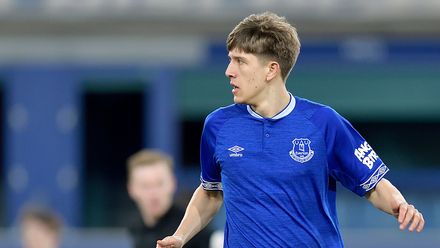 A member of the Finch Farm Academy since the age of 11, Sebastian Quirk signed his first professional contract with Everton in 2020, a 2-year deal.

Described as technically assured and versatile, he scored four times and created five more goals in 13 games for the Under-18s side in 2019-20.

That earned him the step up to the Under-23s under David Unsworth where he made a further four more appearances before the season was ended prematurely by the Covid-19 shutdown.

Quirk was expected to go on and cement his place in Unsworth's 2020-21 season side but it didn't quite work out like that for him, as he was only selected for a handful of starts until February, when he appears to have sustained a season-ending injury. He would finally undergo surgery in April 2021 and his recovery would extend well into Season 2021-22, before he made his first appearance as a sub for the U23s at the end of October.

He played his way back to full fitness over a number of U23 appearances, and did enough to earn a contract extension of 1 year in May 2022.