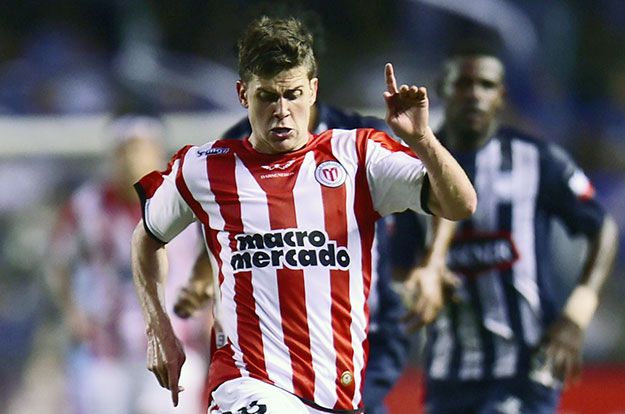 Though manager Roberto Martinez did not ultimately sign a proven striker to provide reliable back-up to Romelu Lukaku during the 2015 summer transfer window, he did draft in an almost entirely unknown prospect from Uruguay for £½M a few days before the deadline.

Born in Montevideo, he began his career with River Plate in his home city and completed three seasons with them, showing an improving strike rate each term before Everton came knocking.

In his final campaign, he scored 10 goals in 27 appearances in all competitions, alerting Blues scout Kevin Reeves who saw enough in the then 22-year-old to recommend Martinez snap him up, particularly given that his dual Italian passport would mean he would not require a work permit to play in England.

Though it was assumed that he wouldn't be quite ready for the English Premier League and would, therefore, join the likes of other young, recent striking acquisitions like David Henen and Sam Byrne in the Under-21s setup, Martinez indicated that he felt Rodriguez would be able to contribute to the first team in his first season with the club.

"He probably won't [need time with the Under-21s] because he has played enough games with his first team in Uruguay in a really competitive league," Martinez was quoted as saying after he signed.

"If you look at the amount of strikers that come through those environments, you don't get surprised about the quality of these players.

"I am not saying that to put pressure on the boy, but he is a player we can be very much excited about in the future."

Rodriguez featured in only a handful of Under-21 games during the first half of the season, but did make the first-team bench for the Capital One League Cup game at Reading in September before making his first-team debut when e replaced Arron Lennon in the last minute of an FA Cup tie against Dagenham & Redbridge in January 2016. That would be his only senior appearance in an Everton shirt.

On 17 March 2016, Rodríguez joined Championship club Brentford on a one-month loan.  He made his debut three days later in a 0–1 home loss to Blackburn Rovers, playing 76 minutes before being replaced by Scott Hogan. He suffered a pulled hamstring on his second appearance and returned to Goodison Park when his loan expired.

Not featuring in any of the pre-season games in the summer of 2016, he was also stripped of his shirt number and looked forward to an uncertain future under new Everton manager, Ronald Koeman, with the Liverpool Echo reporting in August 2016 that Everton had told him he had no future at the club and that he should find another.

He hardly got a game for the U23s, playing only in two Senior Cup Finals. That didn't happen until January 2017 when he finally moved out, albeit on loan, to Waasland Beveren in Belgium until the end of the season but did not play any senior games for them.

His limbo in Europe ended in August 2017 when he secured a free transfer back to Uruguay with Danubio FC.