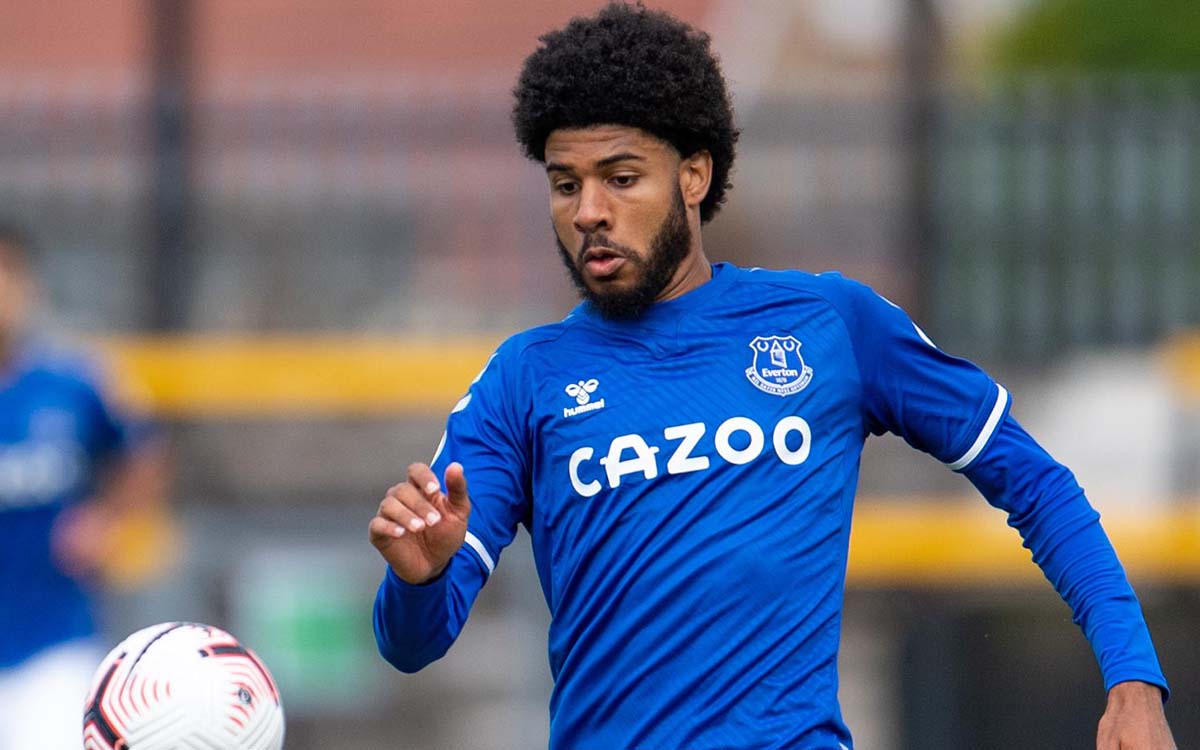 Everton picked up the tall young striker, Ellis Simms in 2017, after he had been released from the Manchester City Academy at the age of 16. Before that, he had been at Blackburn Rovers.

He started slowly in his first season for Everton U18s, not getting many goals until the Spring of 2018, when he scored 4 in as many games — a sign of what was to come...

The next season was much more impressive: the youngster then blazed a fantastic trail with Everton U18s, firing an incredible 32 goals in 21 Under-18 Premier League matches. In all competitions, he was on target 46 times during the 2018-19 season. He played a few times for the Under-23 team during the season, scoring just 10 minutes into his Under-23 debut after coming off the bench in a Premier League International Cup game at Brighton & Hove Albion in October 2018.

Not necessarily a technically gifted player, Simms's raw speed and power worked remarkably well for him with the U18s, where the team played to his strengths as a supreme goal-poacher.

On the back of this remarkable record, Simms agreed his first contract with the club in May 2019 and moved up to David Unsworth's U23 squad. He would find the goals harder to come by at that level, however, and struggled a little for the first half of the season, scoring 13 in total before the season was curtailed by the Coronavirus pandemic.

However, his potential was recognised that season by an appearance on the bench for the first-team as manager Carlo Ancelotti took advantage of the extra substitutes allowed under "Project Restart" in the summer of 2020 to give the teenager a taste of life among the senior squad, although he did not get on the field.

Simms continued knocking in goals for the Under-23s the following season, scoring an impressive 8 times in 12 matches, before a loan deal was completed with Blackpool for him to fulfill the next stage of his development in League One. He would play out the rest of the season with the Seasiders in what turned out to be a very successful loan spell.

The young striker got off to a flyer when he started his loan spell with Blackpool in January, scoring twice after coming on as a substitute with 20 minutes to go at Wigan Athletic on what was his League One debut. Since then, however, he has had something of a lean spell, scoring just twice more over the next 12 games, although his more recent strike against Swindon was a cracking half-volleyed finish.

"Maybe because of his age and stepping into senior football and getting thrown into the deep end, which isn't easy, sometimes he can have a tendency to drift out the game in his mind," said Blackpool assistant head coach, Mike Garrity.  We need to keep him concentrated. We've been talking to him a lot about staying in the game, staying active, staying around it, staying alive and alert. Even with his profile and his physique we don't want him to become a battering ram for us. We want to play football.

"So we're looking at ways and means to use his attributes to help us, because when he opens his legs and gets moving, he's quite pacey. So we're trying to concentrate on the strengths he possesses to use at this level."

Simms would play 22 games for Blackpool scoring 10 goals, enough to help Neil Critchley’s to the League One Playoff final but he would be cruelly denied a starring role in the game because he injured his hip practising penalty kicks in the last training session before their big day at Wembley. Blackpool beat Lincoln City 2-1 to earn their place in the Championship next season.

After recovering from the groin injury and returning to training at Everton in September 2021, Simms then hurt his ankle after tasting first-team atmosphere in pre-season which sidelined him for two months of the new season.

New first-team manager, Rafael Benitez, praised the striker’s attitude, application and goalscoring instinct but the youngster would make just one appearance with an into-the-deep-end starting role at Chelsea at a time when Everton were stripped to the bare bones by injuries and positive coronavirus tests in the camp.

Simms played for an hour before being substituted in favour of his U23s team-mate Lewis Dobbin in a hard-earned 1-1 draw and would not feature again that season, making a move north of the Border instead to Hearts where he scored on his debut.

Simms would go on to have an excellent half-season loan spell in the Scottish Premiership, scoring 5 goals in the league and 2 in the cup to help then get to the Scottish Cup Final, where they lost to Rangers.