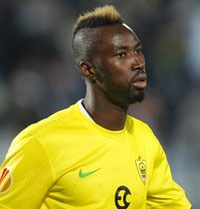 When Arouna Koné was ruled out for almost all of the 2013-14 season, Roberto Martinez had made finding a replacement as one of his priorities during the January 2014 transfer window.

The sale that month of Nikica Jelavic made the need for striking reinforcements even more acute and the Spaniard identified Lacina Traoré as a potential solution.

The towering striker had been signed by Monaco from Anzhi Makhachkala ealier in the month but looked destined to join West Ham United on loan for the remainder of the season after Sam Allardyce had concluded a deal with the Ligue 1 club and successfully secured a work permit on appeal from the Department of Employment.

The move stalled, though, when the Hammers hesitated after learning that the 23-year-old had sustained a slight hamstring injury and when Monaco received an approach for Traoré from Everton.

With Monaco preferring to loan their new striker to Goodison Park over Upton Park, the Ivory Coast international traveled to Merseyside – famously photographed shopping for snacks in Tesco's in Huyton along the way – to undergo a medical.

Traoré's loan switch to Everton was briefly threatened when Monaco's main striker Radamel Falcao suffered knee ligament damage and was likely ruled out for the remainder of the season but the deal was concluded that week and his acquisition was announced on 24th January, 2014.

In all he played 67 times in the Russian League for Anzhi and Kuban Krasnodar, scoring 31 goals and at the time he joined Everton had had played seven times for his country and notched four goals. Possessing pace and deceptive technical ability for his giant frame, the Abidjan-born striker admits that heading is one the weaker sides of his game.

Having arrived at Goodison with a slight hamstring injury, he would have to wait for his debut but it eventually came in February 2014 in an FA Cup Fifth Round tie against Swansea City. The 6' 8" striker scored just four minutes into his first appearance and completed 60 minutes before being substituted.

He was in line for his League bow the following week at Chelsea when he would have become the tallest player to play in the English Premier League but he tore a hamstring in the warm-up and had to be pulled from the starting XI.

Tests on his injured hamstring revealed that he wouldn't need surgery to repair the muscle tear. He was expected back in six to eight weeks, and the decision was made to continue his loan, but he did not regain fitness by the end of the season and, despite talk to the contrary, his loan was allowed to lapse.