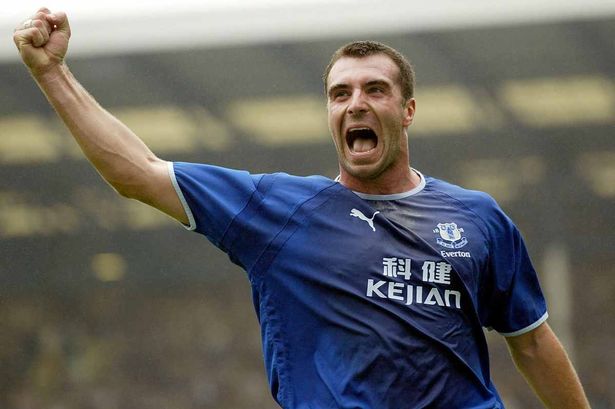 David Unsworth developed through the ranks of Everton's Youth System, reaching the pinnacle of his career when he captained Everton and played for England in 1997.  His potential was evident early on, and he progressed well through the junior England ranks to captain the U-21 team.  Despite a brilliant debut and goal for Everton at White Hart Lane in 1992, he got few chances until the start of the 1994-95 season.

Unsworth played a major part in the turn of fortune Joe Royle manufactured out of the mess left behind when Mike Walker was sacked.  A strong defence was vital to Royle's success in pulling Everton off the bottom of the table and putting together a hugely successful FA Cup campaign.  Unsworth played his part well behind the infamous Dogs of War, and relished his victorious FA Cup Final appearance in 1995.

He picked up the nickname Rhino for his charges upfield with the ball at his feet even his success with such runs was mixed but he did establish himself as Everton's dead-eye penalty taker around this time.

Unsworth's early promise began to wane a little in the 1995-96 as he matured, put on weight, and lost some vital pace. His great tackling skill also seemed to suffer somewhat and his displays became more inconsistent, although Royle became convinced that David could make a great left-back.  In the spring he had a bit of a revival, helping Everton finish 6th in the league.

Unsworth moved into his third full season at Goodison, but he could not recover that early promise which had brought him a full England cap and once Howard Kendall arrived in 1997, Unsworth was sold to West Ham United as part of a swap deal that brought Danny Williamson to Goodison Park.

After a very successful season with West Ham, Unsworth wanted to move back further north, mainly for family reasons. He signed for Aston Villa in the summer of 1999 but once he learned that Everton were still interested in re-signing him, his time at Villa Park ended in mere weeks. He made one reluctant appearance for Villa's reserves before new Toffees boss Walter Smith succeeded in bringing him back to Goodison Park.

He seemed a better player for his year away and his defensive qualities proved a boon to Smith's restructured team as he played a key role in a 10-match unbeaten run which should have given Everton a firm foundation for the season 1999-2000 season.  But Unsworth became part of a team that just could not score goals and their propensity for the long-ball up to the beacon figure of Duncan Ferguson, himself back at Goodison following s a spell away at Newcastle, contributed to the isolation of creative midfield players denied use of the ball.

Like Royle before him, Smith's preferred playing Unsworth at left-back, at the expense of young star Michael Ball, whereas there was a growing feeling that the elder player could be utilised in defensive midfield and Ball c could be put back where he belonged. Smith persisted until 2000-01 when two left-footed defenders in Gary Naysmith and Alessandro Pistone arrived at the club.  Along with Michael Ball's fulfillment of his potential, Rhino had a battle on his hands, although the Goodison injury list and Unsworth's status as one of the fittest people at the club meant that he continued to be one of the first names on the team sheet.

However, that season didn't start too well for Unsworth. He was guilty of giving a few goals away and had a few bad games – hence the Goodison boo boys.  His confidence dipped; he sat on the bench from November until January and a spirited performance against Coventry before a bad game against Tranmere when Everton were embarrassingly dumped out of the FA Cup.

"Unsy" got his head down, though, and in the latter part of the campaign he became one of Everton's most consistent performers, never ducked out of a challenge and showing courage by netting three penalties against Manchester City, West Ham and Liverpool as well as a marvelous bicycle kick against Aston Villa.

And when Smith was sacked in March 2002 and David Moyes arrived from Preston North End, Unsworth marked the beginning of the Scot's 11-year reign as the Blues' manager with a vital goal against Fulham in Moyes's first match in charge.

By 2003-04, despite his dedication and commitment, signs were beginning to appear that perhaps his time as a Premiership player were finally coming to a close.  Moyes's second full season at the helm was a challenging one that saw the Toffees do just enough to secure their top-flight safety before giving up on the final day and alllowing City to walk all over them. Unsworth himself had more poor performances that he would care to remember amid rumours that some players were rebelling against the tough training regimen Moyes continued to impose.

When the club only gave Rhino a year-long contract, and on reduced wages, he wasn't thrilled very miffed and though the offer was later improved to two years, he briefly considered a switch to Bolton before he signed for Portsmouth in July 2004.

"Leaving Everton at any stage is regretful," he said at the time. "I'll always be an Evertonian. It was time to move on. I didn't get what I wanted so I had to move on. When I knew [Pompey] were interested I thought I'd give it a go."

Within a year he had the chance to link back up with his old friend Joe Royle on loan at Ipswich Town whereupon Portsmouth agreed to write off the last year of his contract, but, now a free agent, he signed a three-year deal at Sheffield United instead.

Two years at Bramall Lane, a stint at Wigan Athletic and a year each at Burnley and Huddersfield rounded out Unsy's playing career as he retired in 2009 and took a developmental role at Preston. He was eventually promoted to assistant manager under Alan Irvine, assumed caretaker manager roles on two occasions before he rejoined Sheffield United, this time as Head of Academy Coaching.

There, too, he stepped up into an assistant manager role under Chris Morgan but in 2013 he got the opportunity to once again return to Everton, working as a coach in the Finch Farm academy before becoming Under-21s assistant manager under Alan Stubbs. When Stubbs left to take charge at Hibernian in 2014, Unsworth stepped into the U21 manager's role and was twice asked to take charge of first-team affairs of the Blues' first tean; first alongside Royle for the final game of the 2015-16 season when Roberto Martinez was sacked and again in 2017 when the Catalan's successor, Ronald Koeman, was also given the proverbial bullet.

Unsworth was in charge for eight games in all in that second stint during which time he oversaw back-to-back defeats by 5-1 and 4-1 to Atalanta and Southampton respectively which were enough to convince new major shareholder Farhad Moshiri to turn to renowned "firefighter" Sam Allardyce to ensure Everton avoided relegation that season. Rhino's last game in charge was a rousing 4-0 win over West Ham at Goodison Park but his replacement was already in the stands having agreed to come on board and after Allardyce took charge for what was to be an extended interim assignment itself, Unsworth returned to the Under-23s and became Academy Director at Finch Farm