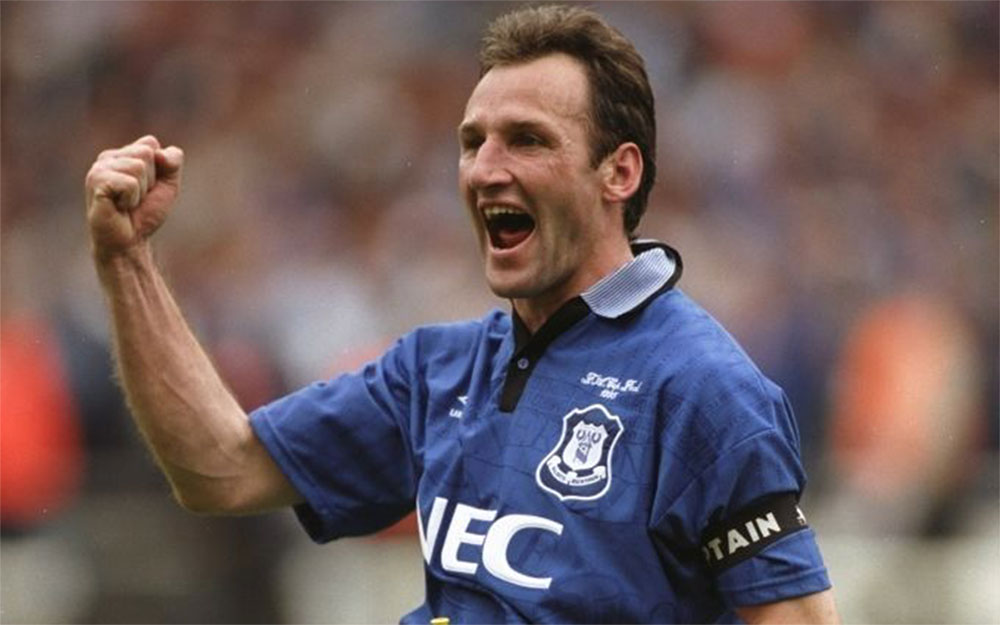 Dave Watson was made of stern stuff: he had to be. After not reaching the first team as a teenager at Anfield, the resolute stopper joined Norwich, with whom his career gathered momentum to such effect that he won England caps.  Thus, when Everton paid a club record £900,000 to bring him back to his native city in August 1986, the move had all the hallmarks of a triumphant homecoming.  Initially, however, nothing could have been further than the truth.

Bought as a replacement for injured local hero Derek Mountfield, Dave appeared indecisive and clumsy, and was caught out of position too often for comfort.  His fellow Scousers on the Gwladys Street terraces were not slow to express their scorn, and the tough six-footer was subjected to a withering examination of his character.  At one stage that autumn he was dropped again in favour of the fit-again Mountfield, but after coming to terms with the Blues' zonal marking system – Norwich had favoured the more straightforward man-to-man method – the Watson confidence returned and he played a full part in lifting the title as well as extending his international career.  Indeed, so dramatic was his continued improvement that those fickle fans voted him 1987-88 Player of the Year.

Since then Dave has grown into a true Blues stalwart.  Even his most passionate advocate would not claim he was the quickest member of the team, but there is ample compensation in his formidable aerial power, tank-like tackling and determination to do the simple thing well.  These days he is more positive in attack, too, and vital goals have included an FA Cup 5th round, 2nd replay winner against Liverpool in February 1991 and a subsequent 6th Round strike against West Ham.  The following summer, Peter Reid offered £1 million to take his former team-mate to Maine Road.  But Dave signed a new contract with Everton and was handed the job of First Team captain in January 1992, succeeding Kevin Ratcliffe.

The initial years of Watson's captaincy did not bring much reward.  The change to Premiership Football saw Everton pretty much rooted near the relegation zone, with potential match-winners like Tony Cottee unable to make a lasting impression.  But Watson survived a sequence of managerial changes that eventually saw Joe Royle take command.  The new manager had new ideas about how to defend, and it was this that stopped the rot of the depressing early nineties years.

Watson's proudest moment as team captain must be without doubt the lifting of the FA Cup in 1995.  This victory was above all a tremendous defensive achievement, for which Watson takes a lot of credit.  He was the inspirational leader of the complete underdogs – the so-called Dogs of War – and to come out victorious over the imperious Manchester United was a sweet pleasure.  Watson, grinning like a Cheshire cat, kept that precious Cup in his grasp all the way back to Merseyside.

Dave Watson's testimonial match against Glasgow Rangers in July 1997 proved to be a spirited pre-season opener, with Everton running out 3-2 winners.  But soon after that Watson relinquished the captain's armband he had worn with such pride through a difficult and tumultuous period in Everton's history.  His successor, in a puzzling move by Howard Kendall, was Gary Speed – perhaps explained as an attempt to keep his unhappy midfielder at the club.

At 36, everyone assumed he could not go on much longer, although he would be sorely missed when he hangs up that the Number 5 shirt in which he has made every single one of his senior starts for Everton.  With Speed's eventual departure, and Duncan Ferguson's reluctance for dealing with the press, Dave Watson assumed the role of Club Captain in January 1998 and consolidated his position as Viv Busby's assistant with the reserve team.

In Walter Smith's management team, Waggy's immense talents were recognized from the start as was appointed Player/Coach, replacing Viv Busby who left the club soon after Howard Kendall.  But Dave didn't stop there.  He went on to prove to Walter Smith that, at age 37, he was still indispensable in the back line.  And he did a great job as mentor to Marco Materazzi, until the defender returned to Italy.

Waggy finally acknowledged that the 1999-2000 season would probably be his last, as his knees really had started to hurt – one needing a cartilage operation in November of 1999.  Appearances have therefore been rare... but he was still be on the playing books for the 2000-01 season.

He finally lost his famous Number 5 shirt when Walter Smith needlessly changed almost everyone's shirt numbers in August 2000, but he retained the Club Captaincy, with Richard Gough taking the mantle of Team Captain.  However, he did not play for Everton again, and eventually took up the managerial post at Tranmere Rovers after it was vacated by John Aldridge.

This is what Jimmy Gabriel had to say about Dave Watson (in Talking Blue, by Becky Tallentire):

Dave Watson was brilliant and what he put out, game after game, was beyond the call of duty.  He would go out and play with injuries and he never let anyone know about it.  We knew because we were on the staff, but he just got on with it because he was a fine man.  So if you want to talk about somebody as hard as nails then Dave Watson was that man and what a great servant to Everton.