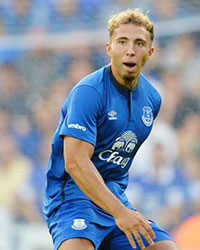 With finances notoriously tight at Everton under the David Moyes regime, the club placed great emphasis on the production line of talent coming through the Academy that produced the likes of Wayne Rooney, Jack Rodwell and Ross Barkley.

Hallam Hope was one such high hope who had been working his way up steadily through the Academy since he joined from Manchester City in 2005 and was recognized at youth international level as he progressed.

Powerful and quick with a voracious eye for goal, Hope was capped by England at U17s, U18 and U19 level during his time with the Blues but with Moyes reluctant to risk young players at senior level until he was totally convinced they were more than ready to step up, he was forced to bide his time at Goodison Park.

He signed on a full-time scholarship with the Club in the summer of 2010 and then a full-time, two-year contract in September 2013 but even though he was given a squad number, 37, in 2013/14, but did not even feature at first team level and spent short spells out on loan Northampton Town, Sheffield Wednesday and Bury in 2014 before finally joining the Shakers on a permanent deal on New Year's Day 2015.


Note: Everton Career Stats on ToffeeWeb are updated after every game.