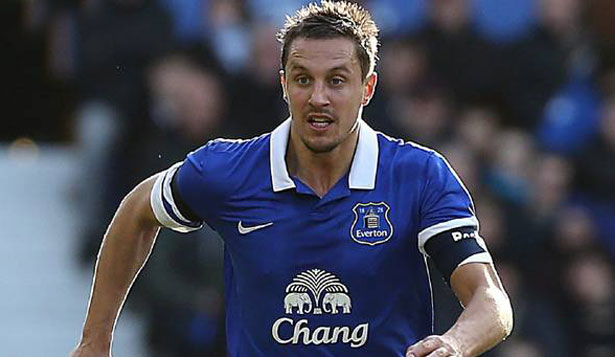 The summer of 2007 had seen a protracted search by David Moyes for reinforcements to his squad drag well into pre-season before the manager finally ended yet another transfer saga to bring Phil Jagielka back to Everton as his first signing of that transfer window.

With a £4m release clause in the player's Sheffield United contract, Moyes played his cards cannily as the recently-relegated Yorkshire club tried to knife West Ham over the Carlos Tevez affair that should, by rights, have seen a points deduction and consequent and relegation instead of the Blades which would have sent them down instead of Sheffield United and rendered that release clause moot.  Unfortunately for Bryan Robson's club, it was not to be, despite court appeals to have the decision overturned.

Sheffield were holding out for £6m for the versatile Jagielka but Everton refused to budge, aided by the knowledge that the player himself had made it clear that he would not move anywhere else but Goodison Park, where perhaps he felt had a point to prove.

The Manchester-born player, whose surname is officially pronounced "Yag-ee-el-ka" but he's resigned to the Anglicisation from colleagues and commentators alike, started out as a 14-year-old Everton trainee in the old YTS.  But Everton ditched almost  their entire Under-15 team back in the later 90s and Jagielka went on to learn his trade elsewhere.

Fast forward 10 years, and he had developed into a highly versatile and capable defensive player, comfortable in midfield, in central defence and at right fullback – even in goal, at a pinch! After Sheffield United's goalkeeper was sent off in a League game against Arsenal, "Jags" did a 30-minute stint between the sticks, the third position he was asked to play that day, and kept a clean sheet.

It quickly became apparent, though, after some less-than-stellar displays in central midfield and right back that centre-back was his best position.  He had the pace, ability to read the game, and footballing brain to succeed alongside another dominant centre half of the ilk of contemporary Everton defenders, Joleon Lescott and Joseph Yobo.

When Moyes's squad rotation kicked in as fixtures and injuries started to pile up in the winter of 2007-08, Jagielka really demonstrated his aptitude in central defence, really only faltering in a Premier League match against Arsenal at the end of December when he allowed hitherto unknown striker Eduardo to latch onto two long balls and turn on its head a game that Everton looked odds-on to win.

After that unfortunate experience, he did enough to consolidate his position in the back four alongside Yobo, while Lescott was shunted over to left back and, over time, he matured into an international-class centre-half to become the rock on which Everton's defence was founded.

Stellar form for the Blues led to recognition at international level and his first senior England caps. He also achieved hero status for Everton in April 2009 when he dispatched the game-winning penalty in a dramatic shootout at Wembley Stadium in the FA Cup semi-final against Manchester United.

Sadly for him, tragedy struck almost immediately afterwards in a Premier League fixture against Manchester City when, in an innocuous-looking incident he collapsed to the turf in agony with a ruptured anterior cruciate ligament in his knee and would miss not only the Cup Final against Chelsea – which Everton would go on to lose in his absence – but most of the following season as well. He came back but not in time to have any chance of getting into the England 2010 World Cup squad.

Jagielka returned in time, though, and reclaimed the first choice centre-back role alongside Sylvain Distin for the next few seasons, even while this defensive pairing had to shake off some shaky moments in the early going.

In March 2011, he was honoured with a 4-year contract extension through 2015 but that didn't prevent an approach from Arsenal for the second summer running. Moyes was adamant, however, that he would not be selling his prize asset, reportedly rejecting bids as high as £13m and forcing Arsene Wenger to turn his attentions to Per Mertesaker.

Despite Johnny Heitinga getting all the plaudits the previous season, it was Jagielka who was preferred alongside Sylvain Distin in the back four in Moyes's last season in charge in 2012-13 season.

Half-way through that season, he was rewarded with another contract extension, this time running through 2017, and, following the departure of Phil Neville in the summer of 2013, new manager Roberto Martinez made Jagielka club captain.

Once again continuing an excellent partnership with Distin, Jagielka also helped usher in his potential long-term replacement in the form of John Stones that season, the then-19-year-old Yorkshireman deputising impressively for his skipper at times in the second half of the 2013-14 campaign as Jagielka struggled with a hamstring injury.

He had recovered by season's end, however, and was included in England's 23-man party for the World Cup Finals in Brazil, where, along with team-mate Leighton Baines, he would unfairly shoulder much of the blame for the defensive frailties determined by the media to be the cause of England's early demise.

Whether it was the effects of getting dumped on so unfairly by media and pundits alike or a general hangover from the World Cup, the Everton captain took a while to get going in 2014-15 and was guilty of some early errors as the Blues' campaign faltered badly and Distin fell out of favour.  A personal turning point arrived for Jags in the Anfield derby, however, when he fired in a spectacular late equalizer that stunned the Kop and stole a point for Everton in injury time.

One massive plus from the season was the blossoming of young John Stones, who had emerged as one of the finest central defensive prospects in the country alongside Jagielka As the season wore on, the skipper came good, rightly claimed the club's Player of the Season award and was rewarded after the season ended with a further one-year extension to his contract, which tied him to Everton until 2018.  That set him up for what he hoped would be a better season in 2015-16, although injuries to the back four would prompt the forging of new partnerships at Goodison, with youngsters Brendan Galloway, Tyias Browning, and Argentine import Ramiro Funes Mori all bedding in to impressive effect in the early weeks of the season.

And perhaps his greatest honour would come in October when he became the first current Everton player to captain England, leading them out as they beat Lithuania to wrap up a 100% winning record in qualifying for Euro 2016. Had he finally proved himself in front of the ultra-critical media, to be a considered, pitch-smart, trustworthy, mature and extremely responsible captain?

Unfortunately, he sustained a medial knee ligament injury soon afterwards in a league game at Arsenal that would keep him out of action until early 2016. Though he would return towards the end of January, Jageilka suffered another injury later in the season, this time to his hamstring, missing six matches as Everton struggled in the League for the second season running.

Lacking experience in his defence with Funes Mori suspended, Martinez rushed his skipper back to lead the team out at Wembley in an FA Cup Semi-Final against Manchester United, risking his hopes of making the cut for Euro2016 in the process, but while he personally put on a magnificent display, the Blues were beaten with one of the last kicks of the game.

He would recover in time to lead the team out for the final match of 2015-16 and the first since the dismissal as manager of Martinez in a 3-0 win over Norwich City but he would be overlooked by Roy Hodgson and England for the European Championship Finals in France, and would continue to struggle with his hamstring as it stopped him participating in any preseason games.

Performances became somewhat mixed over the season, with new manager Ronald Koeman dropping his captain to the bench for most of Everton's sustained run of form after New Year 2017. He regained his place after a defeat at Tottenham and went on to lead the side out for the rest of the season, with a personal high of goals scored in three successive games during April 2017.

There was brief talk of a move back to Sheffield United early in the summer but Jagielka accepted a one-year extension to his contract in August that year but endured the traumatic 2017-18 season under three different managers after Koeman was sacked in October, wth first David Unsworth and then Sam Allardyce employed in an interim capacity to steady the ship. Jagielka as able to bring some stability back to a jittery defence and the club eventually finished eighth.

The arrivals of Yerri Mina and Kurt Zouma under the new regime of Marcel Brands and Marco Silva combined with Jagielka's advancing years understandably meant that opportunities in his 12th season at Goodison Park would become few and far between. Sent off in harsh fashion in the opening-day draw at Wolves, the veteran would lose his place in the side and make just a handful of starts over the remainder of the campaign.

He was released by Everton at the end of the 2018-19 season whereupon he rejoined Sheffield United 12 years to the day after he left the Blades to join the Toffees. He left Goodison as one of the handful of players who played at the peak of the Moyes years, played in an FA Cup final and two semi-finals but wasn't ever rewarded for his commitment and efforts with a trophy.

The 37-year-old would later admit that his departure from Goodison Park could have been handled better, especially when Bill Kenwright had gushed over him as “one of ­Everton’s greatest servants”.

Jagielka said: “I would have stayed, given the opportunity. At the time, they were after a couple of centre-halves – including Kurt Zouma, who had been on loan from Chelsea. It appeared they couldn’t make their mind up about me. It seemed the easiest decision was to let me go.

“That wasn’t nice to hear, after such an enjoyable time there. I still felt I had something more to offer,” Jagielka added.