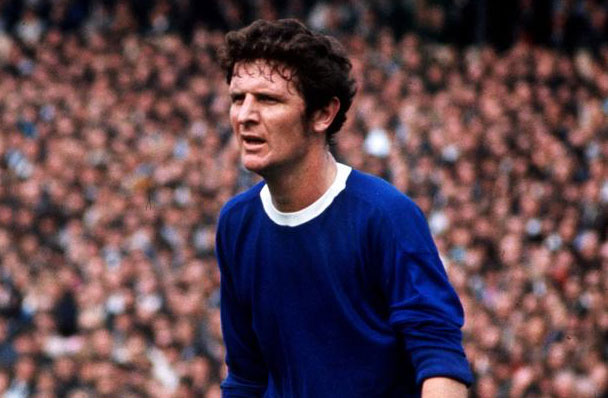 There was something truly majestic about Brian Labone at the zenith of his powers.  He strode around the pitch not with the arrogance of a Roy Vernon or the pure self-confidence of an Alan Ball, but with a kind of nobility that is bestowed on very few footballers.  It was an appropriate quality for a player known as one of the best central defenders of his era.

As is so often the case with players held in such high regard, Labone was an intelligent young man.  He might indeed have gone to university had he not chosen, after much consideration, to join Everton as a 17-year-old in July 1957.  His reward for playing well against Dave Hickson in a trial game was an immediate place in the reserve side, bypassing the junior teams.

Seven months later he made an unspectacular first-team debut, but in only his second game Tottenham's Bobby Smith welcomed him to top-class football with a pasting.  Labone recovered and learned, and his quality began to show in his reading of the game, dominance in the air and clean, crisp tackling.  Even footballers of his class have deficiencies, though, and his were his lack of real pace and his left foot, which was mainly for standing on.  But they didn't matter: he wasn't the world's slowest defender, and he read the game so well; and whenever possible he reserved using his left foot for emergencies.  His right foot was more than adequate for footballing purposes, and he in fact was a capable footballer when striding out of defence with the ball.

His abilities did not go unrecognised.  Labone was given the first of 26 caps by Alf Ramsay in 1962, becoming – surprisingly – the first Evertonian to play for England since the war.  He would have figured in England's victorious 1966 World Cup squad had he not asked to be excused from the party to concentrate on his wedding plans, although he was below Jack Charlton in the pecking order and might not have appeared.  Earlier that year he had led his club to a very memorable FA Cup victory over Sheffield Wednesday in one of the most memorable Wembley finals, his ascent to Everton captain having seemed inevitable, although the process by which he became skipper was not the orthodox one.  Instead of the previous captain, Tony Kay, simply leaving or standing down, he was in fact jailed for his part in an infamous match-fixing scandal, which had taken place before he joined Everton.

A year later, Labone stunned Everton and the club's fans by announcing that he would retire at the end of the next season, or sooner if a replacement could be found.  It was true that he had lost form and confidence, but quitting seemed somewhat drastic.  Thankfully, his form returned and he changed his mind.  He was back to his majestic self by 1969-70, and was a kingpin of the side which won the League Championship that season.  The same summer he belatedly played in his first World Cup in Mexico, excelling as he should have done four years before.

Sadly, the following season was the final act of a glorious career. An injury to his Achilles tendon robbed Everton of one of their finest servants, a wonderful player and ambassador who would have made many more than the 530 appearances his career totalled but for cruel fate.  He might even have held the club record – only Ted Sagar had played more times for Everton when Labone retired in 1971.  Since then, Neville Southall has extended Sagar's record even further.

In his later years, Brian Labone worked tirelessly for the Club as a wonderful and highly respected ambassador – "The Last of the Corinthians", said Bill Kenwright.  The entire Everton community was devastated by his untimely demise in May 2006.