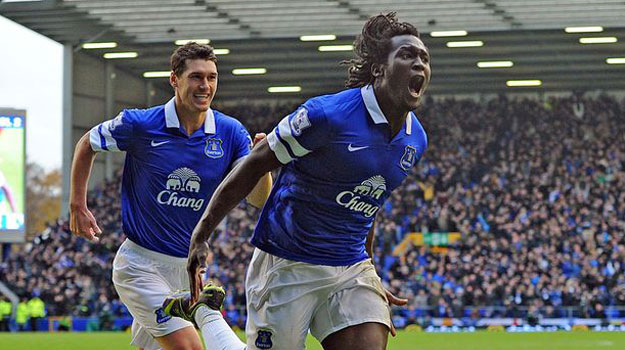 Of the three incoming transfers on a dramatic transfer deadline day in September 2013, Romelu Lukaku's loan move from Chelsea was arguably the most dramatic. Despite dominating the possession under their new Roberto Martinez-imposed possession game, Everton had struggled to score in the first three games of the Premier League season and a goalscorer to supplement the off-form Nikica Jelavic and new arrival, Arouna Kone, seemed to be a priority before the window closed. Yet there were no signs of any interest from the Blues in a new striker until 7pm on deadline day when reports emerged of an approach to take Lukaku on loan.

The deal seemed to have been sewn up when reports in Belgium announced the switch as being confirmed, only for British media sources to suggest that the 20 year-old had, instead, opted to return for another loan spell at West Bromwich Albion where he had spent the 2012-13 campaign.

The saga took another twist an hour later, however, when it emerged that Everton had indeed secured the powerful Belgian forward for the season, with the switch being confirmed by the club after the 11pm deadline had passed.

Midfielder James McCarthy and Gareth Barry were also late additions to the squad that night but it was Lukaku who really caught the imagination of fans who had been wondering where the goals were going to come from under the new regime.

Born in Antwerp, Belgium, to Roger Lukaku, a one-time professional footballer in his own right who played internationally for Zaire (now Democratic Republic of the Congo), Romelu joined his local team, Rupel Boom before moving on to Belgian pro-league team SK Lierse. Then, after Lierse were relegated, he was one of a clutch of players scooped up by Anderlecht.

He eventually signed a professional contract with Anderlecht in May 2009 and made his Belgian First Division debut 11 days later, going on to forge a reputation as the next Didier Drogba, one only strengthened when Chelsea paid an initial sum of £10m for him in 2011 following the original Drogba's departure for China.

Having been involved in only 10 of Chelsea's games in his first season at Stamford Bridge, Lukaku was loaned to West Brom the following year, an opportunity for more regular first-team football that he grabbed with both hands. The 6'3" powerhouse scored 17 goals in 35 appearances, many of them off the substitutes' bench and had seemingly done enough to convince returning manager, Jose Mourinho, that he was now ready to be a fixture in the Londoners' first team setup.

With Fernando Torres, Demba Ba and new Chelsea acquisition, Samuel Eto'o in the picture, however, Lukaka had no guarantee of a regular starting place for the 2013-14 campaign, so when Martinez came knocking to see if Mourinho would let him go out on loan for another season, a deal was agreed whereby Lukaku could get more Premier League exposure and Everton could potentially solve their goalscoring problems.

Not surprisingly, given his pedigree and his form at the Hawthorns the previous season, Lukaku was an instant hit at Everton, marking his debut as a substitute with the winning goal in a 3-2 thriller at West Ham, a powerful header during which he also made contact with a defender's head and knocked himself out cold.

15 more goals would follow in all competitions, most memorably a brace against Liverpool in a 3-3 home draw and the second goal in the demolition of Arsenal at Goodison that briefly set the Blues to edge the Gunners for fourth place and a priceless Champions League slot. Unfortunately, Martinez's men stumbled at the end of an impressive eight-match winning streak and had to settle for fifth and the possibility that Lukaku would either return to Stamford Bridge and resume his burgeoning career there or secure a big-money move to one of Europe's elite clubs on the back of a good showing at the 2014 World Cup.

Predicted to take the tournament by storm with a highly-fancied Belgium team, Lukaku's time in Brazil did not go quite according to plan and he endured two frustrating starts in the Red Devils' first two group matches, failing to make it to the hour mark in either before being substituted and then being dropped to the bench for the next two games.

He made a crucial entrance to the fray against the United States in the round of 16, however, coming off the bench to score what proved to be the winner in extra time in a 2-1 victory over Jurgen Klinsmann's spirited side but he could not help Belgium past Argentina in the quarter finals and they were eliminated 1-0.

Though speculation surrounding his future would continue over the summer, with a succession of high-profile clubs like Atletico Madrid, Juventus and Wolfsburg all credited with serious interest, Martinez had installed him as his top transfer target for the 2014 close season and Everton remained confident that they would be able to bring him back to Goodison on a permanent basis. That prospect only seemed to strengthen when Mourinho brought in Diego Costa from Atletico and re-signed Chelsea hero Drogba, restoring competition at that club for the starting berth that Romelu craved.

On 30th July, the day his post-World Cup holiday officially finished and he was due to link back up with Chelsea's squad for a pre-season friendly in Holland against Vitesse Arnhem, news broke that Lukaku was flying to Merseyside to sign for Everton in a club-record £28m deal, bringing to a close weeks of media speculation and growing anticipation among Evertonians.

He put pen to paper on a five-year deal and a salary reported to be £70,000 a week 24 hours after Ross Barkley had inked his own new terms, heralding a new era at Everton in which the club could not only keep its best players but sign the best as well.

Although Lukaku would go on to reach the much vaunted 20-goal-a-season mark in his first season as a fully fledged Everton player, the manner of it left a lot to be desired.  His dreadful first touch showed no sign of improving and he seemed off his game for at least half the season, due it seems to the combined effects of a toe injury that would not heal, and the death of a close friend from Belgium.

He went through an extended barren spell in the Premier League, not helped by Martinez inexplicably playing him out on the wing, where he often seemed to find himself drawn anyway in an effort to get time on the ball.  The service to him was indifferent but, when he did get the ball at his feet or to run onto, the dreadful first touch would more often than not see possession lost. Baines helped him out by letting him take penalties and some free-kicks, but excluding these he scored most of his goals in the Europa League and earned the Golden Boot as top scorer in the competition.

At one point, Martinez dropped him to the bench and Lukaku later admitted this was somethoing of a wake-up call: "The manager left me out in a few games in December. That was a wake-up call for me to look at myself in the mirror and say ’Rom, you’re not playing well now, you have to be serious with yourself, you have to work maybe harder. Even though I was working very hard, I could maybe give more."

After a sluggish start to the 2015-16 season against Watford, Romelu Lukaku was almost unplayable in the second match, at Southampton, scoring an excellent brace. Two more in the League Cup at Barnsley... and two more at West Brom a month later tended to balance out the barren spells in-between.

The big man would go on to score five more goals than his previous season, with 18 in the Premier League. But the frustrations with his play, positioning, attitude, work-rate, first touch, running off the ball, heading.... it was a litany of critical factors that worked collectively to increasingly deny him legend status, with the seemingly inevitable rumblings about wanting to play Champions League football for a big club every time he joined the Belgian side for internationals.

His equally gobby father was convinced a move would be secured before Euro2016, but he turned out for Belgium still as an Everton player, and initially performed shockingly, getting hauled off against Italy. He redeemed himself with two good finishes against Ireland but did precious little against the mighty Wales who put Belgium to the sword.

The arrival of Ronald Koeman saw a brief respite from the repetitive stories claiming that Lukaku was leaving. It seemed that the Lukaku retinue had been persuaded to accept the contract situation, and that Romelu should do his best to impress the new man. That was until the media carried an increasing flood of stories about how Conte at Chelsea now wanted him to return, with Everton doing their best to repel the overtures by slapping on a hefty pricetag of £75M.

The Summer transfer window passed, like so many before, with no move away for the big man. He got back to work, with his own style of sporadic goalscoring that would make him the Premier League's leading scorer by early February 2017 ― on the back of four fine goals in the 6-3 destruction of Bournemouth.  In December 2016, his agent Mino Raiola seemed to have negotiated a healthy new extension and was 99 percent certain it would be signed... three months later he, claimed that he was “99.9999 per cent” sure his client would commit to a new long-term agreement with Everton. The stinking point ominously rumoured to be an £80M buyout clause Everton wanted in the contract.

In a lengthy interview, published in The Telegraph, Lukaku expanded on why he wouldn't sign a new Everton contract: 'I can be world class, but I need the right platform' – burning ambition and a super-inflated sense of himself being way bigger than anything Everton could provide for him in the near term.

Mixed messages continued to circulate, including of course from the player himself, but it didn't stop him scoring goals, surpassing Duncan Ferguson to become Everton's leading all-time goalscorer in the Premier League era and also topping the charts amongst his peers for the season so far until Harry Kane surpassed him in the final weeks of 2017-18 season.

As the season ended, his determination to leave for Champions League football seemed greater than ever and while early media talk suggested that a return to Chelsea was almost a given, he eventually signed for Manchester United in a £75m deal that had the potential to rise to £90m based on appearances.