Late rally not enough to salvage anything from Villa 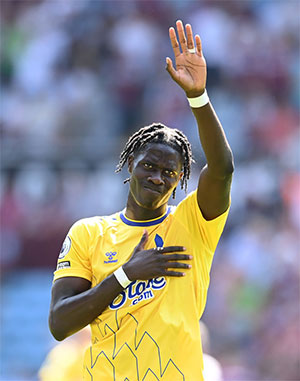 Everton began a League season with back-to-back defeats for the first time in 32 years as they were beaten at Villa Park for the third time in four seasons.

The Blues fell two goals behind with four of the regulation 90 minutes to go but a very late rally prompted by Amadou Onana almost yielded a point, however, both the Belgian and Anthony Gordon were denied in stoppage time by Emilio Martinez.

Onana, the £30m addition from Lille who only arrived on Tuesday, was named among the substitutes by Frank Lampard but Conor Coady made his debut in defence alongside James Tarkowski after signing on loan from Wolves and Dwight McNeil continued in a forward three with Salomon Rondon not deemed sufficiently match fit to start.

The lack of a focal point at centre-forward had hampered Everton against Chelsea last weekend and it left them bereft of hold-up play in attacking areas again this time. Though they would have the ball in the net after Gordon had turned a loose ball home from a corner, the goal would be disallowed for offside and it wasn’t until the second half that they began seriously threatening the Aston Villa goal.


They were already a goal down by that point with Villa having made a fast and intense start that yielded an early corner that Diego Carlos headed narrowly over.

McNeil and Gray almost combined on a rare foray by the visitors into the home penalty area but the former’s pass was too heavy while, at the other end, Villa made the breakthrough with 30 minutes gone.

Ollie Watkins had collected a deep ball near the touchline and when he centred for Danny Ings, the striker took a touch to engineer space from Abdoulaye Doucouré to smash a shot past Jordan Pickford.

Having lost two players to injury last week, Lampard was forced to replace another shortly afterwards when Doucouré pulled up with an injury and came off for Tom Davies.

The hosts retained the upper hand, meanwhile, but it it was Everton who almost carved out a chance in stoppage time but Demarai Gray couldn’t control a cross into the six-yard box and from the subsequent corner, the officials elected not to penalise Carlos when he clattered through Mason Holgate in the box as Villa’s defence finally managed to hack the ball clear.

John McGinn blazed a shot over after dispossessing Gray to start to the second period while Nathan Patterson finally got to the opposition byline when he drew a foul from Lucas Digne and McNeil dropped a half-volley wide before the Toffees, playing in their all-yellow third kit for the first time, finally tested Martinez when Gray forced him into parrying a strong shot.

Rondon was introduced with 64 minutes on the clock as McNeil made way but Lampard resisted making his final changes until there were just 10 minutes left.

In between, Vitalii Mykolenko had had to clear off his own line when Emiliano Buendia’s deflected shot looked to be looping in but while Onana and Dele Alli were belatedly introduced to try and change the pattern of the match, Villa appeared to put the game to bed just six minutes later.

Onana was caught trying to drive through the centre-circle, Villa moved it quickly to Buendia who fed Watkins to his right and then raced into the box to collect the return ball and scuff it inside the post to double the score.

Onana atoned for his mistake immediately, however, with excellent footwork on the byline at the other end that ended with him squeezing the ball across where former Everton defender Lucas Digne couldn’t help but bundle it into his own net.

That sparked a late flurry of action that saw Davies caught stranded as the last man from an Everton corner but Pickford saved to deny Watkins. Gordon then came back to life to surge in on goal and shoot but Martinez pushed it away and Rondon couldn’t enough on the rebound to stab it home.

Then, after Rondon had flicked on a long ball forward, Onana popped up in the box again and stretched out a long leg to divert it goal-wards but a combination of a defender’s leg and Martinez’s glove was enough to deflect it behind.

Finally, Gordon had one last chance when he cut back on his right foot and had one shot blocked before he stung Martinez’s palms again with the rebound but Everton would run out of time in their attempts to salvage a point.

So, a hugely disappointing but not wholly unexpected start to the season that saw the Toffees extend their poor away from from last term into this one. However, with work continuing on the transfer front, there is hope that Lampard can augment his attack with a new signing before next weekend’s home clash with Nottingham Forest.