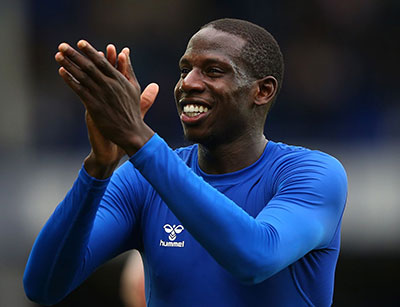 Abdoulaye Doucouré went off during today's defeat at Aston Villa after reporting tightness in his hamstring, offering hope that he won't be sidelined for too long.

For the second match running, Frank Lampard was forced to go to his bench during the first half to replace an injured player, with Doucouré signalling to the dugout that he couldn't continue with just 34 minutes gone at Villa Park.

However, Lampard explained afterwards that, "Doucouré has a hamstring injury that we will assess. It wasn't a sudden ping, it was more of a tightness so we will see."

The manager was able to replace the Mali international with Tom Davies and later brought on new signing Amadou Onana but he came into the weekend without André Gomes and Allan.


Allan, who is still working his way back to match fitness after undergoing surgery earlier in the summer, took a heavy knock to his foot in training this past week. Gomes, meanwhile, has been battling an injury since pre-season and there is no timetable for his return.

The club are still hopeful of bringing Idrissa Gueye back from Paris Saint-Germain but the move has been thrown into doubt by a reported impasse between the player and his current club over a severance payment.

Gueye was left out of PSG's team for their Ligue 1 clash with Montpellier today.


Si Pulford
1 Posted 13/08/2022 at 22:14:11
I mean, when you read that article, it's almost comical. A series of unfortunate events. And it doesn't even mention the two injured centre-backs from game one.

It's surreal what happens at Everton. No other club would contemplate starting a season of professional football without a single fit striker.

And no other club would Mr Magoo their way to the amount of freak injuries they get.

We've got another 6 days to get a striker or two and a midfield player with lots of time to get them integrated into the club before we lose too many points.

Just remember, we only need 40 points and there is still over 100 to play for.

This isn't on Lampard. These are three injury-prone players who seem to be made of glass. And the lack of a striker is the fault of Billy and the fella from Wolverhampton.

Despite all of the above, I'm quietly confident we will be fine.

Brian Murray
4 Posted 14/08/2022 at 03:34:49
Going to say it again and again. Why do we have to cling on to the players who dragged us down to their level last season? Doucouré being one of them. Can't even pass a ball to save his life. Squad player at best but no-one better than him and he knows it.
Andrew Brookfield
5 Posted 14/08/2022 at 07:38:55
We're not ‘clinging on to them', Brian, the reality is most teams have seen their level and wouldn't want to be ‘dragged' down.

It's less us clinging on and more we couldn't give them away for free!

Jim Bennings
6 Posted 14/08/2022 at 08:03:55
Given that it took me about 25 minutes to realize that Doucouré was on the pitch yesterday, I can't say that this is any great loss, especially if Gana does actually arrive.

I liked Doucouré, but the player I saw at Watford just hasn't been seen enough in his time at Everton, maybe in Carlo's first handful of games and then Benitez's early games but ,80% of the time, he's either injured or game passing him by.

Onana will start next week for sure.

After Don Alexander and a few others on here, I'm certainly Billy Boy's biggest critic. But this lack of a striker isn't on Kenwright, far from it. It's on the recruitment team.

Every man and his dog knew Richarlison was away, his agent said it last winter. We should have had two strikers, not one lined up.

Maybe we did but didn't get them. But it certainly should have been addressed. But to lay that one at the shysters' door is just wrong imo.

One thing is for certain: it's most definitely got to be addressed asap; otherwise, we're staring down the barrel.

Then again... it could be worse.. we could support Man Utd.

Brian Murray
8 Posted 14/08/2022 at 08:06:04
Okay, worded wrong – they cling to us to the bitter end. Doesn't alter the fact that, in the space of weeks since last season, they have not all of a sudden become better players.

Suppose give Holgate his due, he's, dare I say it, maturing and reinventing himself as decent. Will some strikers transform them somehow?

Gordon didn't win a single header yet we hoofed it up to him every time we needed an out ball. Whoever thought this good (2 games running) wants a serious talking to.

A friend worked on something like measuring the amount of oil being pumped into tankers. He was given a 5-year contract including accommodation and a large tax-free salary. Suddenly the Gulf War started and Iraqi oil was embargoed. He had nothing to do.

Should he have said, "Please release me from my contract so I can try and find another job"? Or should he have stayed in Iraq and picked up his salary?

Now replace the words "my friend" with Gomes, Gbamin and "Iraq" with Everton. And then explain if you answer changes.

Michael Connelly
12 Posted 14/08/2022 at 23:08:52
Doucoure as much of a hindrance than a help. Cost us a point against Chelsea; was pulling Ings by the shirt for Villa's first goal, so it would probably have been a pen if he'd missed, then went AWOL for Villa's 2nd.
Neil Halliwell
13 Posted 16/08/2022 at 15:57:06
Anyone feel sorry for Rondon? Putting three wingers up front against Villa's centre-backs when it did not work in the previous match was curious.

Our only centre-forward did make a difference when he came on. Whatever confidence the poor bugger has must have been blown away by now.