Calvert-Lewin has an outside chance of making Goodison derby 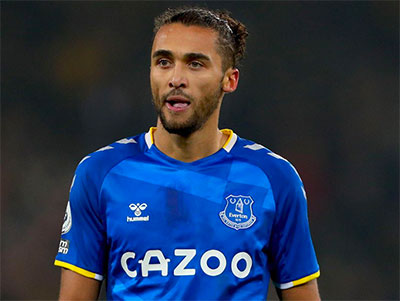 Dominic Calvert-Lewin is expected to return to full training next week with the hope of being involved in Everton's first match in September, the home clash with neighbours Liverpool at Goodison Park.

The striker has missed all of the Blues' opening games of the 2022-23 season after injuring his knee in training just three days before the curtain-raiser against Chelsea and with no other striking options other than veteran Salomon Rondon, Frank Lampard's side have struggled to find the net, scoring just once in the Premier League in three matches.

Calvert-Lewin's 2021-22 campaign was wrecked by a serious quad injury and successive niggles that combined to restrict him ti just 18 appearances in all competitions but he returned in time to score a precious winner against Crystal Palace in the penultimate League game of the season, one that proved decisive in keeping Everton in the Premier League.

Both he and the club were hoping he could stay fit and replicate the scoring form that saw him strike 21 times two seasons ago and earn a call-up to the full England squad but, thus far, it has been more frustration for the Sheffield-born player.


Calvert-Lewin resumed light training last week, returning to the grass a week ahead of schedule, but while he could technically be fit by the time the reds visit on 3rd September, he may not be ready to play.

"We must be calm because we can't push him at this stage," Frank Lampard said of Calvert-Lewin today. "It will be tough but hopefully we can look at the games after [the derby]."