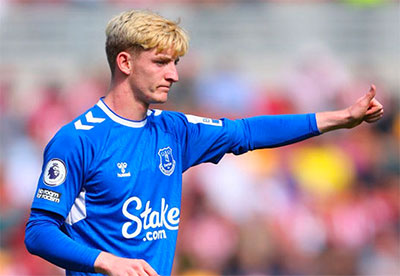 Everton had their first win of the season within their grasp with seven minutes to go at the Gtech Community Stadium but let themselves down with familiarly abysmal set-piece defending and had to be content with a draw against Brentford.

The Blues had ridden their luck as the Bees hit the woodwork three times during the contest but were heading for three points following Anthony Gordon’s first-half opener. And they could have sealed it in the second period but Demarai Gray wasted a great chance with 15 minutes left.

Then, as they went into retreat trying to see out the game, Frank Lampard’s defence buckled from a corner that Vitaly Janelt converted to give Brentford a share of the spoils.

With new signing Neal Maupay not registered in time to be eligible to face his old club and Salomon Rondon failing to convince in the League Cup tie at Fleetwood last Tuesday, Lampard reverted to the front three of Gray, Gordon and Dwight McNeil that employed in the opening two fixtures.


Despite its ineffectiveness in those games, it was a formation that looked as though it might reap dividends this time, with Everton surviving some early scares to take the lead in the 24th minute.

They were caught out by a long ball forward that Rico Henry centred behind the visiting defence but Bryan Mbeumo missed the target when he really should have scored.

Then, after Alex Iwobi had tested David Raya from 25 yards out and James Tarkowski failed to reach a tempting looping header back over the Bees’ defence following a corner, the hosts countered and came within inches of scoring.

Henry’s cross was only headed out as far as Mathias Jensen by Mason Holgate and the Dane rattled a shot off the base of the post from the edge of the box.

Gordon then had a tame effort saved and Jordan Pickford managed to keep an awkward corner out at his near post before the former notched his first goal of the season to put Everton 1-0 up.

Conor Coady spotted Gordon’s run with a perfectly-weighted ball over the top that the 21-year-old controlled with one touch and then tucked past Raya in composed fashion.

Iwobi and Coady almost got into trouble trying to dribble out of their own box and then an awful error by Nathan Patterson allowed Henry to cross but this time it was Ivan Toney who planted a header onto the post and Yoane Wissa blazed the rebound over the bar with the goal gaping.

Mbeumo then shot weakly from a good position and was presented with an even better chance a few minutes later as Brentford were afforded all the time they needed to pass the ball around outside the Everton box but the forward curled an effort wide of goal.

Everton finished the half with an opportunity for Gordon set up by good by Vitalii Mykolenko but it was Brentford who came within inches of scoring again seven minutes after the interval.

A long throw by Jensen was nodded on into the six-yard box where Christian Norgaard despatched an overhead kick onto the bar that struck Pickford’s hand on the way back out and the keeper was able to gratefully clutch it to his chest.

A decent Toffees move that went from McNeil to Gray saw a Gordon volley parried into the path of Mykolenko but the Ukrainian’s shot was blocked behind while, back at the other end, Mbeumo spurned one more chance when a curled a foot wide of Pickford’s right-hand post.

Everton had to regroup after Holgate was forced off with a knee injury mid-way through the second half and Michael Keane replace him but they were almost undone shortly afterwards when a corner was cleared only as far as Henry and Pickford had to push Janelt’s header away at the far post.

The chance for 2-0 arrived at the feet of Gray after Onana strode into space and split the defence with a great pass but where Gordon had been emphatic in the first half, Gray hesitated and tried to cut back inside and the chance evaporated.

10 minutes later, after a claim for handball against Iwobi had been waved away, Thomas Frank’s side equalised and it was a desperately poor goal to conceded from the visitors’ perspective.

Substitute Keane Lewis Potter flicked a corner from the Brentford right across the box where Janelt was left all alone by a clutch of static blue shirts to convert and deny the Blues two points.