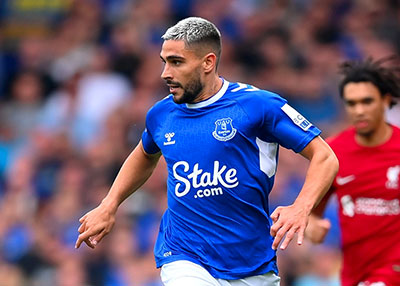 Everton’s wait for their first win of the season goes on but they will take enormous encouragement from having gone toe-to-toe with Liverpool in a rip-roaring game of inches that could have gone either way.

The ball hit the woodwork four times and both goalkeepers had to be at their very best but Everton will feel they came agonisingly close to nicking it on a day where Conor Coady had the ball in the net against his old club and Neal Maupay probably should have scored a dramatic debut goal.

Coady’s goal was ruled offside following excellent work by Maupay from a corner but just three minutes earlier, the Frenchman had been served up with a gilt-edged chance as the Blues broke away on the counter-attack but he shot at Allison Becker from close range.

Frank Lampard made one change from the team that drew at Leeds on Tuesday, bringing Maupay in for his first start since his arrival from Brighton at the expense of Dwight McNeil and the debutant had the first chance of the game, a shot he scuffed across goal following good work by Demarai Gray.


Always dangerous, Liverpool fashioned their first opening in the 19th minute when Trent Alexander-Arnold dug out a deep cross from the byline that Darwin Nunez headed wide at the back post.

Gordon then tested Allison with a crisp, low shot following a corner but the Brazilian saved it comfortably but 13 minutes before the break, Everton rattled the woodwork after a sustained spell of pressure ended with the ball breaking for Tom Davies. Unfortunately, the midfielder’s instinctive shot with the outside of his boot curled onto the post and bounced out.

Nunez headed another chance well over in the 40th minute but the Uruguayan prompted a brilliant save from Jordan Pickford three minutes after that. Ambitiously taking a bouncing ball on the half-volley, Nunez’s shot took a nick off Nathan Patterson but Pickford tipped onto the crossbar and then the ball came back to Luis Diaz, the Colombian smacked an effort of his own off the inside of the post.

The reds started the second half the better side and Konstantinos Tsimikas fired wide from the angle not long after half-time but Maupay had a half-chance a minute later when Alex Iwobi found him in the box with his back to goal but his overhead kick dropped narrowly over the bar.

After a lull, the game then ratcheted back up again for a back-and-forth final half hour that yielded great chances for both sides to break the deadlock.

Nunez shot straight at Pickford from just inside the box, Iwobi tried to catch Allison out with a half-volley but his cheeky effort dropped wide while the excellent Patterson almost profited from a deflection off Virgil van Dijk but his shot bounced behind off the Dutch defender.

At the other end, substitute Roberto Firmino saw a shot finger-tipped behind by Pickford but Everton surged forward in numbers on the counter, Gray eventually laid it back to Maupay who had time to set himself in front of goal but lifted his shot to a height where Allison could block from close range and divert it behind.

The French forward thought he had redeemed himself shortly afterwards, though after Gray’s corner had come back to him on the right and his cross was chested down by Maupay who fired it back across goal for Coady to convert almost on the line.

Unfortunately, the defender’s celebrations and those of the deafening Goodison crowd were cut short by Video Assistant Referee Darren England who determined that he was half a yard offside.

Van Dijk could count himself fortunate to avoid a red card for an ugly stamp on Amadou Onana’s ankle, an incident that didn’t seem to get any attention from the VAR, and the Dutchman was in the way six minutes from time when Dwight McNeil, on a couple of minutes earlier for Gordon, saw a deflected shot clawed over by Allison just when it looked as though the ball might loop over him and in.

Pickford denied Firmino once more three minutes from the end and England’s Number 1 pulled one out of the top draw deep into stoppage time when he got his fingernails on a Mohamed Salah shot that was arrowing inside his near post and diverted it onto the post.

So honours even in the first local grudge match of the season but an Everton display that was night-and-day different from the same fixture last December when Rafael Benitez’s men were cut to shreds and soundly beaten on a night of bitter acrimony from the stands towards the Spaniard and the club’s hierarchy.

In Lampard, the Blues have a manager who is tapping into the passion of the fans and is seeing the fruits of his labour at Finch Farm being reflected on the pitch.