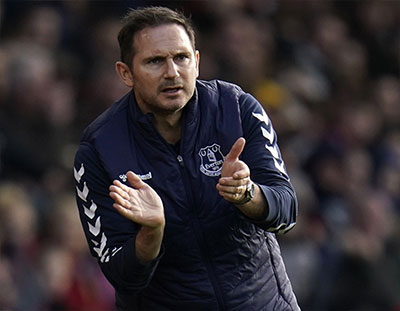 Frank Lampard has credited his players for their hard work in recent weeks in making Everton harder to beat, describing how that has laid a foundation from which the Blues can grow as an attacking outfit as the new summer signings bed into the squad.

In an open letter published on the club’s official site, the manager credited new signing Neal Maupay for how well he has been fitting into his new surroundings and for grabbing his first goal in the win over West Ham and acknowledged the importance to the team of Dominic Calvert-Lewin, but Lampard emphasised the new defensive steel of the side.

“We are harder to beat and harder to score against – that’s a huge thing in football,” he wrote. “Can we be better on the ball? For sure, but… [w]e have got to understand as well that we have got new players in and that means it takes time to get fluidity to our game.


“At the moment, though, we’re at the start of our process moving forward and the West Ham win gave us three important points, especially after we deserved more from our previous matches.

“It’s been welcoming to see the defensive steel across the team, which has given us the second best defensive record in the Premier League. That’s down to the players: the ones who were here last season and the ones who came in during the summer.

“There has also been a noticeable improvement at our set-piece defending. Ashley Cole has focused a lot on that with the players and our analysis team. They give the squad the right messages and then the players have to have a desire, determination and organisation to not let teams score.

“It’s early days, of course, but I think our fans appreciate the improvements we’ve made as a team. That’s down to hard work and our players.

“There’s been a turnaround in players and, in reality, that’s something we had to look at. I’m thankful to the Board, the owner, the Chairman and Denise because they backed us in terms of who we wanted to sign.

“The rest of our improvement is the work of the lads. There was a lot of tension last season, for obvious reasons, but we’ve settled that. We must never be complacent but we are working really hard and, at the moment, we look in a much better place for it.”

Read the full article at evertonfc.com

Damn, there's a sentiment that won't go down well with certain members of the congregation here!

However, I think no small amount of the credit goes to Frank himself. He has incorporated that steely attitude, not only defensively but all over the pitch.

I have yet to see a single example of something that drove me crazy at times last season -- a player losing the ball and then waving his arms and pouting before trying to get it back. This season they're all relentless on recoveries, and did you know we're up near the top of the league in that category?

Lyndon Lloyd
6 Posted 26/09/2022 at 20:44:09
Mike (2), I hesitated to include that passage for that reason but, at the end of the day, the Board have supported Lampard and Thelwell in the transfer market this past summer and they have demonstrated a willingness in recent months to answer the clamour from fans to simply allow the DoF and manager to get on with their jobs.
Christy Ring
7 Posted 26/09/2022 at 20:56:06
We were a sinking ship when Frank took over, players' confidence was shattered; himself, his staff and the fans saved us from relegation.

He has addressed most areas of the pitch with little money, solid defence, a midfield with power and pace, and Maupay looks promising upfront with Calvert-Lewin hopefully back.

We look a different team and he's heading in the right direction, a manager we can trust, in my opinion.

And I have no problem with him giving credit to the Unholy Trinity in the Boardroom – they did (eventually) come through for him and Thelwell with the money for quality additions.

Now don't get cocky, lads – we need to keep the momentum going by bringing home 3 points from a poor Southampton on Saturday.

Jamie Crowley
11 Posted 26/09/2022 at 22:00:30
Frank's biggest complaint at Chelsea was that his team gave up too many goals. I was behind his signing and excited for it, but that little voice in my head kept saying, "Martinez reboot?"

Nope. He prioritized the back line. Our first signings were Coady and Tarkowski, and he gave young Patterson a chance from the beginning and I firmly believed he would have done so even if Seamus was healthy.

Then he completely revamped a dire, dire midfield.

He learned from his mistakes at Chelsea, and he's creating a team in his image. I'd honestly give him an A letter grade thus far, despite last year's record. He inherited a gawd-awful team and ethos, and in a single window (basically) he's completely reinvented Everton.

A huge shout out to Kevin Thelwell as well, as he's done a marvellous job in moving on players and also buying intelligently, in places of need, and on the whole economically responsible. Thelwell gets another A letter grade from me thus far.

For the first time since Carlo – who did what he did on stupid expenditures and smoke-and-mirrors – I am very, very bullish on Everton. Long may that continue, the future is bright again, and Hope has shown her pretty face on this great club again.

Lee Courtliff
12 Posted 26/09/2022 at 22:21:34
"You've got to have the bollocks to play!" My favourite quote of any Everton manager since Joe Royle accused Liverpool of throwing their dummy out of the pram.

We'll soon replace West Ham as the Best of the Rest. That means European football for us to look forward to, and I don't care if it's 'only' the Europa League or Conference League. We need Europe and we need trophies!!

Haven't been this optimistic since the first season under Bobby.

Trevor Powell
13 Posted 26/09/2022 at 22:37:28
My Dad always used to say about the great Eighties team that "they hunted in packs" to get the ball back and it seems the mantra of this team. Long may it continue and improve!
Terry Farrell
14 Posted 26/09/2022 at 23:48:31
Loved Frank from Day 1. Class act, genuine and is an absolute legend as a player so knows how to motivate players. He inspires confidence and is measured.

We're never going to catch up with the Big 6 because of the 30 years of mismanagement at boardroom level... but at least we can hope we put out a team that can play good football and win more than we loose.

He saw problems in midfield and defense and has addressed them head-on while being unafraid to drop players or move them on.

Not the best, but you have to work hard, keep working hard and then work harder until the game's finished.

That should always be the very minimum and we haven't had that since Moyes.

If Iwobi can change and step up and up again, then it gives me hope we won't be in a relegation scrap.

Also pleased to see the small Lampard out brigade from the start of the season have gone quiet too. 3 points on Saturday please!