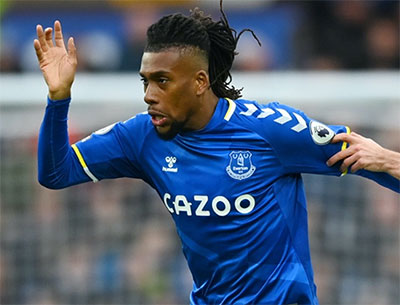 Everton got off to the perfect start against Manchester United as Alex Iwobi scored a fine early goal but they then gifted Erik ten Hag’s men the opportunity to turn the game on its head in the first half and couldn’t recover despite a late push at the end.

Iwobi curled home beautifully from 25 yards to put Frank Lampard’s men a goal up after just five minutes but the Nigerian was involved in the mix-up with Idrissa Gueye that let United in for the equaliser nine minutes later and was then caught in possession just before half-time, allowing the visitors to take a lead into half-time.

After what had turned into a dreadful first-half display, the Blues grew back into the contest as the second half wore on, particularly after debutant James Garner and then Dominic Calvert-Lewin had come on with a quarter of an hour left.

The former was denied superbly in stoppage time by David de Gea after Amadou Onana had almost levelled but Everton were left ruing those first-half slips for the ending of their seven-match unbeaten run.


Lampard dropped last weekend’s match-winner, Dwight McNeil, back to the bench to allow the scorer of the only goal in this fixture last season, Anthony Gordon, to start as the only change from the team that lined up at Southampton.

And, starting with an intense posture, Everton forced Casimero into an early mistake, with Onana dispossessing the Brazilian and giving Demarai Gray a chance to drive at the opposition defence before flicking a deflected ball to the side that Iwobi controlled and then side-footed home superbly.

The next chance for either side fell to United, though, as Iwobi and Gueye tried to exchange passes under pressure in the centre circle, the Senegalese mis-controlled and the intercepted ball was worked quickly to Antony who had time to sweep it past Jordan Pickford and level things up.

Ten Hag was forced into an early change when Anthony Martial had to come off for Cristiano Ronaldo because of an injury but after Casimero had planted a gilt-edged chance wide in the 41st minute, the Dutchman saw his side take the lead.

Iwobi was tackled trying to dribble past his man halfway inside United’s half and, just like the equaliser, the ball was pinged straight down the channel to a red jersey and Ronaldo did the rest, advancing into the box and then drilling it through Pickford’s legs.

Chances were few and far between for the hosts and they didn’t fashion a meaningful one until the 62nd minute when Iwobi volleyed back across the penalty area but Seamus Coleman couldn’t divert the ball goal-wards.

Eight minutes later, Onana headed not far over from a corner while Christian Eriksen lashed narrowly over at the other end before Marcus Rashford thought he had made the game safe nine minutes from time.

A deep De Gea kick was flicked on by Ronaldo while Iwobi, who had dropped into right-back after Garner had replaced Coleman, was beaten in the air by Rashford who was able to spin onto the loose ball, win his duel with James Tarkowski and then knock the ball home after Pickford had got a foot to his initial shot.

The goal was ruled out by Video Assistant Referee Andre Marriner, however, after a handball by the United striker had been spotted on the replay.

That gave Everton a lifeline heading into the last few minutes and Onana had a good chance to equalise in the 90th minute but could only glance his header wide and a minute later, De Gea came up big to finger-tip Garner’s curling shot behind and away from the arriving Onana at the back post.

From the resulting corner, Calvert-Lewin could only drop a header wide at the far post while Pickford came up for the last two set-pieces as Everton desperately tried to force the ball home in time added on but it wasn’t to be.