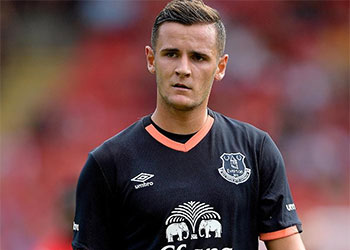 Shani Tarashaj, a speculative signing by Roberto Martinez who never managed a game for Everton, has announced his retirement from football at the age of just 27 because of injury.

A £3m acquisition from Grasshopper Zurich in January 2016, Tarashaj was regarded by some in his homeland at the time as the potential new Xherdan Shaqiri.

He was loaned back to Grasshopper for the remainder of the 2015-16 season to allow the player to complete his national service but he featured in Everton's pre-season preparations the following summer following Martinez's sacking.


However, he was not included a part of new manager Ronald Koeman's plans for the upcoming season and, continuing a pattern that would sum up his time with the Blues, he  joined Eintracht Frankfurt on a season-long loan. His time in Germany was disrupted by enforced absence, first from benign angina and then when he had to have his tonsils removed.

A serious knee injury the following summer required surgery, sidelining him for the remainder of the year and his recovery would take up most of the 2016-17 season, spent behind the scenes at Finch Farm.

More than two years after signing for Everton, he finally got to play in a competitive game, albeit for the development team, appearing as a surprise second striker for David Unsworth's Under-23s but he was ultimately not considered good enough by the new management team of Marcel Brands and Marco Silva in the summer of 2018 and he was sent back to his old club in Zurich at the beginning of the 2018-19 season, for another season-long loan.

Tarashaj was effectively offloaded by Everton in 2019 when he signed what was supposed to be a 2-year loan deal with FC Emmen in the Dutch Eredivisie. However, Emmen cancelled the loan in October 2020 as the player struggled with injuries and failed to make a first-team appearance for them. As a result, Everton terminated his contract early.

He never made a single appearance for the Everton senior team and would eventually be forced to call time on his career this week aged just 27 because of recurrent injuries.

For nothing. Absolutely zilch.

Of course, he could just as easily have turned into Switzerland's Erling Haaland... but what are the chances of that?

Go back to Martin Murray, then on to Michael Branch, and then include the likes of Billy Kenny and Jose Baxter.

A multi-millionaire for doing nowt!

Not bad for a young lad.

Martin Murray was the first example of an unearthed, supposed superstar-in-the-making from humble roots that I remember. All I could recall was his club being Home Farm, and a picture of him in their hooped kit on a muddy pitch.

I just took a look at Wiki to be reminded of the details of the whole unfortunate saga.

Smallman played 21 times scoring 6 goals, a return we would probably be happy with in the current squad as a backup striker, before injury (two broken legs, dislocated shoulder and more) effectively ended his time at the club.

Murray had to retire from elite football (I think he continued to play in the Irish League) as a teenager due to a heart condition.

A lot of publicity at the time when we got my namesake from Home Farm. The new George Best even.

Smallman looked the part and I remember scored a cracking overhead kick in the title charge in 1974, to go two-up vs Sheffield Utd. Enter Dai "The Drop" Davies, gifting them goals to lose.

A crying shame a player has to retire from the game at 27 years old.

A crying shame anyone has to give up a career at such a young age.

It's always a gamble when you sign a young footballer. Will they succeed or not? It's the ultimate unknown.

You could say as much about most people in any walk of life.