Lampard on away form: “There's definitely a different sense about us now” 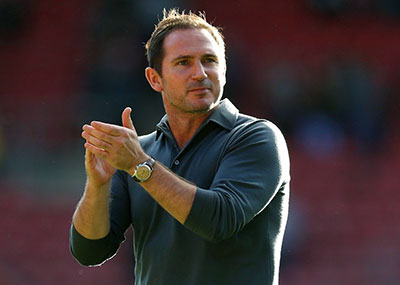 Frank Lampard says he can see the difference in Everton’s posture in games away from home this season after he and his staff had identified key weaknesses in how the players handled adversity last season.

The former Derby and Chelsea boss arrived at the club at the end of January tasked with keeping the Blues in the Premier League after they had gone into a tailspin under his predecessor, Rafael Benitez, and though he was successful, it was a very close-run thing, in large part because of some persistently poor results on the road.

Lampard oversaw just one away win between the time he was appointed and the end of the 2021-22 campaign, that a crucial 2-1 win at Leicester, while there were damaging defeats like the morale-sapping 5-0 reverse at Tottenham and a potentially catastrophic loss at fellow strugglers, Burnley, where Everton threw away a 2-1 lead.

This season has not been without its disappointing showings in terms of attacking play from the Toffees away from Goodison, not least in the defeats at Aston Villa, Spurs again and Newcastle but the close nature of those losses, the hard-won draws at Brentford, Leeds, and the 2-1 victory at Southampton have shown are all evidence of a much more resolute group of players to last season.


Speaking to Sky Sports before another battling draw, this time at Fulham on Saturday evening, Lampard was asked what lies behind the fact that Everton have just two wins from their last 23 games on their travels.

There's a few who were here before me and a few I inherited who are here with me now that we have to take responsibiity for now... he said. Some of it will be confidence. We certainly had a feeling about us last year that when we went behind on the road, heads went down and we conceded more, which wasn't good enough

There's definitely a different sense about us so far this season and there some parts that are definitely just pure football — having a solid nature about us, having areas of the pitch where we are dominant. [I don’t mean] dominating games, but if we're under pressure, we dominate our box and defend well.

In midfield, we have to compete, have energy, legs and the quality of pass to stay on the ball and hold the game sometimes. And the clinical nature to take chances.

“Of course, I’m listing everything in the game, but when you go away from home in this league, you have to be spot on. We're not spot on; of course we're not now but we're working towards that.

The games we've lost, I'd say only Aston Villa back in August was where I felt defensively we were culpable.

Newcastle and Spurs away were tight, decided by a penalty and Almiron curling home a good goal.

Man Utd at home, I think we got caught out twice high up and Pickford had a rare lapse in that match in an otherwise solid season so far.

I have to applaud once again the signings of Coady and Tarkowski.

It feels like we have a backbone finally for the first time since the Jagielka, Distin & Lescott era.

I think in terms of reading the game and the actual art of defending, Coady and Tarkowski are up there with anything we've had in the last 30 years.

If only we had a bit more bite and precision in attack.

It's the one thing I have reservations about.

I think away from home we should not go with ineffective wingers; I think we should go much more narrow with 2 up front and a midfield 4.

Neither Gray nor Gordon are particularly creative, don't offer the full-backs much support, and are both blowing for tugs in the second half of games.

David West
3 Posted 31/10/2022 at 21:08:37
I agree with both previous posts. I think we can all see it, especially away from Goodison Park, Calvert-Lewin looked isolated, which shouldn't really happen with a front 3.

I get what Frank is trying to do, he's trying to keep us in games that, last season, we were getting our arses kicked, and hoping the front 3 can win a few.

He just needs to get more out of Gordon and Gray or shuffle them and give McNeil a go and hope they have impact from the bench.

A wide forward or two in January please.

Paul Kernot
4 Posted 31/10/2022 at 22:21:20
I'd agree with that final point, Dave. We need a far more effective wide player. A Sterling type who puts defenses under pressure and has the calmness to roll it to waiting strikers to finish the job, rather than head down looking to shoot all the time or run into blind corners. Mahrez at Man City is another example.

They don't grow on trees, of course, so we can only hope Thelwell finds a gem. No doubt it's crystal clear to them what we need to add to the squad. Don't get me wrong, Gray and Gordon are good players but the magic they are both capable of is less than consistent.

Belief, handwork, skill and wise transfer buys will help the continuous improvement, but there's a long way to go. We're in a better place, with genuine optimism now for this season.

But we're definitely better. Hopefully much better as it's been a work in progress for ages now. But it will be interesting to see how Frank deals with the players not getting games who have played a lot, like Keane and Holgate, unlike the so-called dead wood. Can't see any future at Everton for these two to be honest.

I reckon we need another 5 or 6 good players to be top half.

They came closer to relegation than us last season and that manager who likes to show everyone his latest iWatch gets on my nerves.

The Premier League is wide open. Anything is possible if we convert these hard-earned draws into wins, just as Leeds did at Mordor.

Meanwhile, the BBC Breakfast show has just stooped to new lows. If it was bad enough being told how bad the country and the world is and we're all doomed in an overly dramatic fashion, I've now been subjected to a Jordan Henderson interview, which was effectively a plug for his autobiography. Isn't there something about the BBC not advertising? Because that is what it effectively was.

What a start to the day.

Danny O’Neill
9 Posted 01/11/2022 at 06:46:00
Sorry, don't know if this belongs here but it get worse. Glossing over the fact Conte is banned from the dugout quickly followed by an interview with Klopp and a Klopp love fest from the sofa.

I think I need pills.

I have also just seen that and can't understand why Conte has a touchline ban for his sending off but Bingo only gets a fine for his. I thought the FA used the same rulebook as Uefa?