Trio to undergo scans on Monday 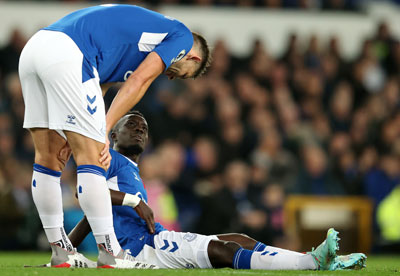 Dominic Calvert-Lewin, Amadou Onana and Idrissa Gueye will have their respective injury concerns assessed when the squad returns to Finch Farm on Monday.

All three players had to be withdrawn during today's disappointing 2-0 defeat to Leicester City, with Calvert-Lewin suffering a recurrence of a hamstring problem that threatens any hopes he has of being selected by Gareth Southgate for the 2022 World Cup.

Gueye was replaced by James Garner at half time after straining, "the top of his quad," according to manager Frank Lampard while Onana aggravated an ankle sprain sustained in training this past week.

"They feel like they're the lighter end of muscular injuries," Lampard said after the game. "Gana did his halfway through the first half. He was playing well, to be fair, and then came off at half-time. He continued so that's a sign for him that hopefully it's not a big one for him.


"With Dominic, I don't know, but he felt something in his hamstring.

"And with Amadou, I just think it was more of a sprained ankle, which he actually had in training yesterday, and then he took a couple of knocks in the game and had to come off for it."

Let's hope that Dom has recovered before Boxing Day.

You could tell he was struggling from the first minute and here's me shouting at the screen and writing on the Live Forum that he's lazy.

I take it back; he's silly for not sitting out and resting it. My apologies, big man.

I know he's settling in and he's done fairly well but I want Onana to show more attacking intent with the ball.

Dom has looked pretty sharp but I'd expect it to take a while longer before being a nailed-on starter.

Gana started well but had a sloppy game against Leicester.

A large part of me hopes they all miss the World Cup and our tour down under so they can come back fully fit for what is going to be a tough "r#!@@%^*?", sorry scrub that, no "r" talk yet. Let's say a tough task to win some silverware.

On the upside, our tour of Australia may unearth a gem of a player. A Cahill Mk 2. Would our scouts and recruitment team know one if they tripped over one? – is another issue.

I feel for Gueye, he's a shadow of the player who left, it's sad to see such a player decline.

Our defence is looking better but there's an awful lot of work to be done with our midfield and toothless attack.

Lampard needs to start learning about when to use his subs and changing the game before it slips away from him.

Persisting with a 3-man midfield is reckless.

Injured for basically the last 18 months, not exactly clinical when he's in scoring positions, but we sit here and think he's the second coming of Cristiano Ronaldo.

We need a better striker that we can rely on, we needed it in the summer but it wasn't done.

We actually need two, but in January it probably won't happen so that means we'll struggle to score goals most of the season and likely have a repeat end to the season that we did last.

Only at Everton do 3-year projects never move on from Day One.

It's about the here and now and getting the best out of the crap players you're left with.