Onyango recalled from loan at Burton 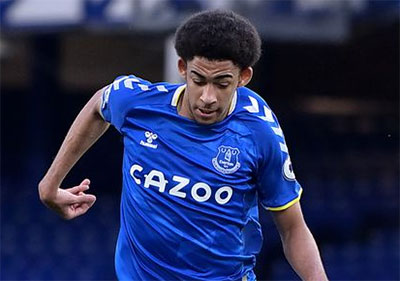 Everton Under-21s midfielder Tyler Onyango has become the latest player to be recalled early from a season-long loan, returning to Finch Farm from Burton Albion.

The 19-year-old has played 24 times for the League One club with one assist having played his way to the fringes of the first team at Goodison Park and making his full debut two years ago.

It is unclear why Onyango's loan has been terminated early but he follows in the footsteps of Nathan Broadhead, who was recently sold to Ipswich Town, and Ellis Simms who has been involved in the senior setup for the past two games.

Is Lampard running out of players who want to play his "system"?

He was held out of their last game a few days ago.

That team's awful and leaks goals, but I wouldn't put that on Tyler particularly.

Tony Abrahams
4 Posted 18/01/2023 at 19:19:18
I watched Burton playing recently, James, and thought they were getting completely mismanaged, in a similar, but totally opposite way to Everton. (I can't help speaking double Dutch sometimes!)

I can't even remember if Onyango actually played but Burton were playing the highest line imaginable, and got absolutely murdered by anything, and I mean anything, that got hit over the top.

It's virtually impossible to hit anything over the top against Everton, but at least they compensate their opponents, by leaving loads of space between the lines, which definitely helps to keep the pitch big.

Guess their manager will discover what Spurs and Everton know. That as long as the checks keep hitting his bank account, Dele will show up for training and happily sit and watch the games from the bench.

Burton Albion owners don't put in money apparently. It's why Hasselbaink resigned a few months ago. This fellow Dino Maamria was JFH's assistant and is currently their temp manager.

Back to Tyler, without injury, he had a lot of no-shows when he first arrived there. But did work his way into regular rotation, including some 90-minute stints.

So, he was getting regular minutes, including starts. Did we pull him back to play? He did seem pretty raw to me at Albion.

Robert Tressell
10 Posted 18/01/2023 at 19:46:25
Hard to know how good Onyango is. He was too good for the U23s certainly. Maybe in part because he's so huge. Burton are obviously a complete shambles and will be relegated to League Two, so not a great place to develop or judge his progress.

I know Gueye, Onana, Doucoure, Davies etc are not exactly shit hot but hard to see Onyango stepping up just yet. Presumably he'll be back on loan but to somewhere less shambolic.

If it was me at that age, I'd be heading abroad for a different experience.

Where is Davies going?

Rangers have disassociated themselves from a deal!
However, I appreciate it's media driven!!!

Onyango is miles off Everton but, unless something else is in the pipeline, I don't understand why the club are calling him back.

Lampard was a very, very good midfielder, so I just wish he could rub off on our current midfielders.

“Onyango was too good for the U23s” — not sure about that, how many times did he play for them? Whenever I saw him, either for the U18s or U23s, he never stood out for me, always in the wrong place at the wrong time.

I'd like to know how he has performed at Burton. There is a lad on here who does a very detailed report on our loanees – perhaps he could let us know how the lad has done there.

He stood out as tall, but all over the place, not in a good way, and he was subbed off at half-time!

I predict another loan, but not to Grimsby. Perhaps another League Two side; just on geography, I'd guess Tranmere or Barrow.

Smacks to me that there will be very little activity in the Transfer Market, by way of incomings, hence why were are recalling a few of the Loanees.

1) Like Broadhead, a Football League Team has lined up a bid to sign Onyango permanently. But with his lack of track record and experiences, a 7 digits bid like Broadhead's is highly unlikely and it does not worth to sell him if the bid does not reach 7 digits.

2) Something internal happened at Burton Albion that Thelwell decided to cut short the loan to find a better Football League Team for Onyango. Given he has played 24 times (with reportedly decent but not spectacular performances) and without a change of manager, it doesn't appear an "uprising" at Burton forced the recall.

3) The most likely and the most depressing scenario, IMHO: our Finance remains in such a bad shape that we don't have any money left (or enough for a worthwhile target) to reinforce Central Midfield, after our supposedly needed upgrade at Striker &/or Winger, hence having Onyango recalled and Price staying with the club.

Fingers crossed that it is something closer to Scenario 2 above upon which the recall is based.

This lad can't hold down a spot in a team who are in the relegation zone, post their last home game 0-4, and are probably thinking, let's send him back so we can bring in other loanees, which, quick glance, they have been doing this week.

A Grimsby webzine match reporter called him "Omnishambles Onyango"! Looks like a new loan, a new start, or a spell back in the U21s is likely.

Be concerned that the tallest midfielder I've seen this season made no impact against a League Two side packed with 5ft-8in and 5ft-9in midfielders!

I do not blame Frank Lampard as he can only work with what he has. If relegation was to happen, would the youth be given their chance?

COYB — turn it around or it could be years in the wilderness.

Rob Dolby
25 Posted 19/01/2023 at 19:33:26
Certainly the lower down the pyramid you go the more physical it gets. Maybe the move was designed to get a bit of devilment into his play similar to the loan that Warrington has at Fleetwood?

I can't see us needing him this season. I do think we should bring Alli back from Turkey though I think our purse strings are tied on that one.

Good luck to both.

The Chairman was sitting there saying, "You won't be able to hear yourself speak in a minute, the scousers are getting on soon." It was funny, made great telly.