Gordon strikes again as Everton grind out another draw 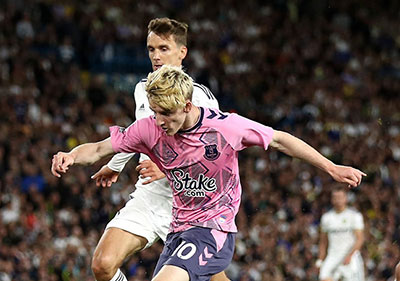 Anthony Gordon scored his second goal in the space of three days and Everton took another precious lead into half-time away from home but they had to settle for a point again following Luis Sinisterra’s 55th-minute strike.

The Blues had been rewarded for an excellent first-half display with the advantage at the halfway stage but they failed to contain their hosts early in the second half and were punished.

Demarai Gray had the ball in the net in the 66th minute but was flagged for the slenderest of offside decisions that was, controversially, backed up by Video Assistant Referee, Lee Mason, and there were chances late on for Amadou Onana and Nathan Patterson while Jordan Pickford made a brilliant save to deny Leeds’s Joel Gelhardt.

With Mason Holgate injured, Frank Lampard opted for a 4-3-3 formation for the first time this season, with Nathan Patterson and Vitalii Mykolenko as full-backs either side of James Tarkowski and Conor Coady.


New signing Neal Maupay was the victim of the Bank Holiday and a bizarre Premier League ruling that required his registration for the match to have been completed one full working day before this evening’s fixture and had to watch on from the sidelines.

That meant Gray, Gordon and Dwight McNeil starting as a forward trio once more and the latter two were involved as Everton took the lead with their first effort on goal.

McNeil did well to get to the ball ahead of a Leeds defender and poke it to Iwobi and the Nigerian dissected the home defence with a perfectly-weighted ball which Gordon picked up and guided through the Illan Meslier's legs.

Rodrigo came within a whisker of levelling a few minutes later but failed to make any contact on Jack Harrison’s cross before having to go off with a suspected shoulder dislocation sustained when he came together with Pickford in the 28th minute.

With Jesse Marsch’s half-time team talk ringing in their ears, the home side came out much stronger at the start of the second period and Brenden Aaronson worked Pickford for the first time with a powerful drive in the first minute following the restart.

Five minutes later, a cross from the Leeds right came all the through Harrison but his tame shot was easily dealt with by the Blues’ keeper, but the warnings weren’t heeded and the visitors’ lead was wiped out five minutes after that.

Pickford’s clearance came straight back through midfield to Sinisterra and he took an early shot that wrong-footed the keeper and crept inside the post to make it 1-1.

Rather than fold, Everton held their own even if they were careless in possession in midfield at times and McNeil dragged a shot wide before Gordon hesitated a fraction too long before sliding Gray in for a one-on-one chance against Meslier which he successfully converted. Unfortunately, the linesman’s flag cut short the Toffees’ celebrations and there was to be no reprieve from VAR’s arbitrary lines.

At the other end, Gelhardt missed the target from 10 yards out and Pickford had to come up huge to thwart the same player a few minutes later. Alex Iwobi had dithered and been dispossessed near the centre-circle, Tarkowski stumbled over the ball as it was played into the box the England keeper somehow got an out-stretched hand to the eventual shot from Gelhardt that was otherwise destined for goal.

Though visibly tiring and with no help coming from the substitutes’ bench which remained inactive throughout, Everton almost won it in the final 10 minutes or so.

First, a corner from the left skipped through to Onana who controlled it but fired his shot straight into Rasmus Kristensen’s head from point-blank range. Then Gordon sent Patterson into the clear down the channel but the young Scot smashed his effort straight at the goalkeeper who blocked it away to safety from the hosts’ perspective.