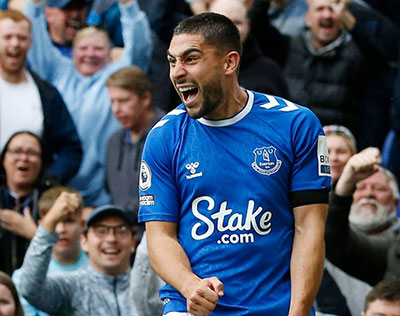 Everton will go into the international break having broken their duck for the new Premier League season as Neal Maupay’s terrific solitary goal gave them victory in a close contest against West Ham.

The Frenchman fired home from just inside the box eight minutes into the second half and the Blues managed to see the game out despite a late charge by the Hammers that required Asmir Begovic to be alert to deny Maxwel Cornet and Jarred Bowen and saw Said Benrahma rattle the post.

Frank Lampard had been hoping to welcome Dominic Calvert-Lewin back to the fold following injury but the striker didn’t even make the squad after failing a fitness test so Maupay started in a line-up that featured just one change from the one that started against Liverpool last time out.

Idrissa Gueye came into the starting XI for his first start since returning from Paris Saint-Germain and formed part of a midfield three that helped cancel the visitors out in what was an even first half short on genuine goalscoring chances.


Conor Coady came close to turning a Bowen cross into his own net in the eighth minute but did well to knock it behind after Vitalli Mykolenko had allowed the winger to out-muscle him near the byline and neither side managed an effort on target until the stroke of half time when Begovic comfortably caught a header from Kurt Zouma.

West Ham had the first chance of the second period when Pablo Fornals got to the byline and centred for Bowen but he swept a first-time effort narrowly over before the lively Demarai Gray drove in from the left flank and forced the first save from Lukas Fabianski with a low shot.

The former Leicester man was involved in the goal shortly afterwards, however, as he knocked a neat pass inside to Alex Iwobi, he picked Maupay out on the edge of the penalty area and having gathered the ball with a tidy first touch, he fired a crisp shot wide of Fabianski and inside the near post to hand Everton the lead.

David Moyes’s side responded immediately and Michail Antonio’s header from Bowen’s cross was caught and James Tarkowski got a vital block in to deny Bowen what would have been a goal-bound effort while, at the other end, Gray put two teasing balls across the face of goal that just eluded Maupay in the middle.

West Ham would force 14 corners over the course of the game but really only came to scoring off one of them when Tomas Soucek glanced a header a foot wide of the far post.

The Londoners came even closer a few minutes later when Everton were caught trying to play their way out of their own half, Gueye lost the ball and Benrahma advanced towards goal before curling an effort around Begovic who watched it bounce off the inside of his right-hand post and fly across goal before being cleared.

Anthony Gordon had had his quietest game for quite a while so it was no surprise when he made way for Dwight McNeil with a quarter of an hour to go and Gray was replaced by Abdoulaye Doucouré a few minutes later but not before he had jinked his way along the 18-yard line and fed Iwobi whose curling shot just cleared the bar by a few inches.

Begovic pushed Cornet’s shot behind after Declan Rice had played him in with six minutes to go and the former Burnley man almost wrapped his foot around the ball after both James Tarkowski and Conor Coady had mis-judged the flight of a long ball down the centre but, thankfully, it ended up in the side-netting.

Finally, Begovic had to tip a sliced Bowen cross over in stoppage time and Tarkowski did well to twice get his head on the ball from the resulting corner as the Toffees held out to claim three points that lift them away from the bottom three.