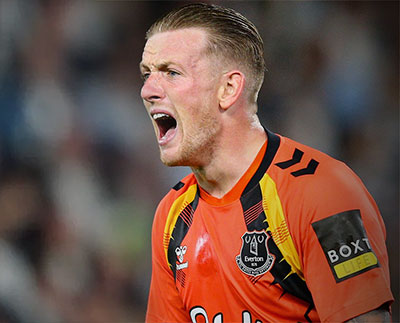 Everton picked up a valuable away point against Fulham as an entertaining contest somehow ended with no goals scored in West London.

Much of that was down to Jordan Pickford, who made a series of excellent saves in the first half, and a terrific defensive stand epitomised by James Tarkowski and Vitalii Mykolenko in particular and while the Blues didn’t often test Bernd Leno in the Cottagers’ goal, they did go very close to scoring themselves.

Dominic Calvert-Lewin came within inches of registering for the second game in succession and Demarai Gray was foiled by the goalkeeper early on but it was Pickford who was the busier of the two keepers while Everton’s defence had to stand tall in the second half as the home side tried to force home a winner.

Nathan Patterson was back in the matchday squad but Frank Lampard kept faith with his starting XI, retaining captain Seamus Coleman in an unchanged line-up, and the Blues made a strong start to the game.


Calvert-Lewin just failed to connect with Gray in the box and Anthony Gordon had a half-volley charged down before Gray collected a cross from Mykolenko and smashed a rising shot that Leno had to push over the bar in the sixth minute.

Pickford had to be alert to pull off an even better stop at the other end to fingertip Willian’s effort over and, from the resulting corner, Pickford had to tip the ball behind again as Aleksander Mitrovic rose to header towards the top corner.

That set-piece ended with Pickford palming a shot from Harrison Reed over and Calvert-Lewin was on hand to clear the ball away from his own goal line as the visitors refused to buckle under the pressure.

Everton’s best chance came in the 20th minute as Gray whipped a dangerous ball in behind the Fulham defence, Calvert-Lewin could only get a glancing touch on it with his shin and the ball flashed past Gordon at the far post.

Reed’s deflected shot fell to Pickford on the half-hour mark while Conor Coady could only steer a volley at the keeper off another Mykolenko cross, Tarkowski steered a free header straight at Leno and Gordon wasted a decent chance towards the end of the half when he lashed over.

The second half began with a check by the Video Assistant Referee after Willian went down in the box under the attentions of Idrissa Gueye but, sensibly, no penalty was given and Pickford was called into duty five minutes later to push away a shot from the Brazilian winger after Mitrovic had headed over.

Amadou Onana had a shot following a corner that dribbled agonisingly wide just before the hour before the game began to tilt in Marco Silva’s side’s favour. However, Fulham were restricted to mere half chances as Mitrovic miscued again with a volley and a half volley and Tarkowski did brilliantly to get across to block an effort from substitute Tom Cairney.

Pickford was called upon to save once more from Willian and James Garner, on for Gueye, made a vital interception in his own box as Everton held out for the point.