Lampard on the brink as pathetic Everton lose again 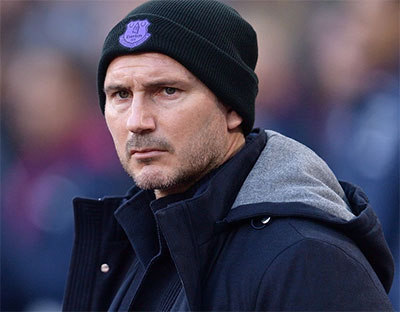 Everton’s shocking run of results continued with defeat in another “six-pointer” at the bottom of the Premier League as they went down without much of a fight at West Ham.

The Blues looked to have the edge in the first 20 minutes of a cagey affair inside a nervous London Stadium but despite dominating the ball, they failed to cause their hosts many problems.

Everton might have had a penalty when Angelo Ogbonna appeared to handle a cross from Demarai Gray with a quarter of an hour gone but neither the referee nor Video Assistant Referee, Andre Marriner felt it was worthy of being penalised as an infringement.

However, the Hammers got the encouragement they needed to come out of their shells as the half-hour mark approached when a poor pass by Idrissa Gueye was intercepted and Jordan Pickford was forced to make an excellent one-handed save to push Said Benrahma’s dipping effort over his crossbar.


The opening goal came just eight minutes later, though, when the ball was chipped back into the Everton box following a West Ham corner, Yerry Mina and Conor Coady got in each other’s way and Jarrod Bowen was on hand and fractionally onside to knock Kurt Zouma’s flick-on past the keeper from close range.

1-0 became 2-0 three minutes before half-time when an attempted pass by Alex Iwobi was cut out, the Hammers countered and Michail Antonio skipped past James Tarkowski’s ill-advised lunge on the touchline. The burly striker centred past Coady and Bowen arrived to thump it home and claim his second goal of the afternoon.

Iwobi went very close to giving the visitors hope heading into the interval but his low drive took a decisive deflection off Declan Rice skidded wide off the outside of the post.

Needing to change things up, Lampard swapped Seamus Coleman and Vitalii Mykolenko for Dwight McNeil and Tom Davies, with Iwobi moving to right wing-back but despite an increase in urgency, there was precious little end product and no further attacking introductions would be incoming from the manager.

Iwobi almost connected with Dominic Calvert-Lewin’s put-stretched leg with a clever slide-rule pass and Gueye’s shot from 25 yards was tipped behind by Lukas Fabianski but it was West Ham who came closer to adding to the scoreline.

Pickford had to do superbly again to turn Emerson’s shot onto the crossbar in the 65th minute and Nayef Aguerd headed over from the subsequent corner before Rice was inches away from making it 3-0 following a run down the left flank and a shot that just missed the far post.

Aston Villa’s win at Southampton kept Everton from dropping to rock bottom in the division but without a win since October, no sign of one coming under the present manager, and Lampard having now overseen the worst points return from the first 20 games of a season in Everton's history, his continuing employment at the club seems impossible at this point.

However, owner Farhad Moshiri and Bill Kenwright wouldn’t be drawn on Lampard’s future when questioned by a reporter for Sky Sports outside the stadium, with the former suggesting it wasn’t his decision.