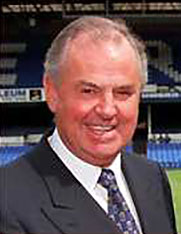 Peter Johnson arrived at Everton in 1994 as a "white knight" ready to propel Everton back to the summit of the game after years of stagnation following the club's successes in the mid-1980s but left Goodison Park just four years later having incurred the ire of supporters following a second brush with relegation from the Premier League and the controversial sale of Duncan Ferguson behind then manager Walter Smith's back in an effort to raise badly-needed cash.

He was the first chairman of the modern era to seriously examine the prospect of moving Everton away from Goodison Park to a new, purpose-built stadium on the outskirts of the city of Liverpool but ended up selling his stake in the club to Bill Kenwright's consortium in 1999 having achieved very little to move the Toffees forward.

Born in Liverpool in 1940, Peter Robert Johnson had built up an estimated net worth of £150m at his peak in the mid-1990s. He had started his working life for his father, a pork butcher in Toxteth, earning £3 a week.  He dilligently built up his Park Foods empire from a Christmas club and hamper business, eventually headquarters in Birkenhead.

It was the strong local connection which took him into football in a serious way.  He was a Liverpool fan and shareholder who in 1987 was asked to rescue Tranmere Rovers, the proud old club Wirral club in danger of extinctionat the time.  He appointed former Everton player Johnny King for a second spell as manager and together they led Tranmere up from the foot of the old Fourth Division to the gates of the Premier League.  They knocked a few times but failed to gain entry.

King later became director of football at the club Johnson left behind to cross the Mersey to Goodison Park for a bigger challenge in the summer of 1994, with the prescient words of King ringing in his ears.

"Peter Johnson is a very strong man but football can bend the strongest at times," King had said. "He's a friend of mine, a clever man, a good man, and he can be a good chairman for Everton.  But this game is ruthless.  If you don't get things right you have to take a bit of stick."

Everton's downward drift from their last title triumph in 1987 had gathered speed in the early 1990s under the stewardship of Dr Michael Marsh. Howard Kendall had returned in 1991 for a second but ill-advised spell at management and left again in November 1993 when the Board blocked the incoming transfer of Dion Dublin. The takeover by hamper-business millionaire Johnson was finally completed in March 1994 after dragging on for months, a critical time in the early years of the new Premier League.

The uncertainty and lack of funds for new players was compounded by Everton's position at the bottom of the table but the arrival of Johnson was seen as a new beginning even if there had been voices of concern raised by members of the competing consortium that Johnson, a season-ticket holder at Anfield for many year, had not been born a Blue. Nevertheless, the takeover came at an opportune time for Johnson — Everton shares were not highly valued, and he was able to leverage his sizeable wealth to gain a significant controlling interest with an outlay of around £10m.

Johnson survived near disaster in his first couple of months in charge as Everton escaped relegation from the Premier League by the skin of their teeth in May 1994, coming back from 2-0 down to beat Wimbledon 3-2 on the final day of the 1993-94 season. Johnson had wanted a substantial shareholding but the main priority was to get money into the club to enable it to purchase new players and fund ground improvements. The route chosen to achieve this aim was a rights issue underwritten by Johnson’s family trust.

Prior to the rights issue Everton had 2,500 shares in issue; they are rarely traded but were changing hands for around £2,600. The one-for-one rights issue was priced at £4,000 per share, thereby discouraging ordinary shareholders from taking up their rights. The general aim of the transaction (that new shares should go to Johnson as underwriter of the rights issue) was also facilitated by making them non-renounceable. Johnson could ,in principle, have bought shares from the Moores family (who owned 43.52% of the club prior to the rights issue) but the money would obviously not have gone to the club.

When Mike Walker had shown himself to be wholly unsuited to the role of Everton manager with a terrible start to the 1994-95 season, Johnson moved decisively to remove him and replace him with former player and fan favourite, Joe Royle that November. By May, the Goodison legend had steered the Toffees to its fifth FA Cup by beating both the odds and Manchester United at Wembley, a trophy triumph that felt at the time as though it heralded a new beginning for the club.

A high-profile chase for prolific goalscorer Stan Collymore ensued and though Everton lost out to neighbours Liverpool, they nevertheless managed to land Andrei Kanchelskis from Manchester United for £5.5m and the Russian international's 16-goal haul in his first season took the club to the brink of Europe. They were pipped to the Uefa Cup on the final day of the season by Arsenal but there was optimism for the following season, particularly as a run of form leading into December had the Blues sitting in the top six.

In that time, Johnson had made some other potentially significant signings in the form of Ferguson, Daniel Amockachi, Gary Speed, Nick Barmby and made hugely positive moves off the pitch, launching The Evertonian magazine in December 1994, the This Is Everton video magazine, opening the first Everton Megastore on the corner of Walton Lane and Langham Street across from Goodison Park in 1995. He also initiated the refurbishment of the Prince Rupert's Tower on Everton Brow that features on the club crest.

However, despite the investment Royle's regime would come to a premature end in March 1997 following a harrowing run of six defeats and disagreement over the terms of a deal for striker Tore Andre Flo. Kanchelskis, whose form had collapsed, was sold to Fiorentina and Kendall returned for a third spell as manager that almost ended in relegation in May 1998 but another last-day escape ensued.

Determined that that would be the last time their club flirted so dangerously with relegation, Evertonians chanted "We want Johnson out" on the pitch at full-time following the 1-1 draw with Coventry City but it would be a few more months before they were granted their wish.

Kendall was axed in the summer of 1998 to be replaced by Walter Smith and in attempting to support what he felt might be the second coming of Sir Alex Ferguson to the Premier League, Johnson backed his new manager to the tune of £20m with the acquisition of Olivier Dacourt. Marco Materazzi, John Collins, Steve Simonsen, and Ibrahima Bakayoko. That the money had come not from Johnson's pockets but the bank would swiftly become apparent and it necessitated the sale of Ferguson for £8m in November, a deal that came as a surprise to Smith and as a shock to Everton fans.

It came on the heels of a succession of "own goals" by the Chairman that had included a short-lived attempt to get rid of Z-Cars, the displacement of long-term season-ticket holders for luxury suites and boxes, a fiasco over the distribution of tickets for the '95 Cup Final, the infamous red season ticket covers, a questionable 1997-98 light blue home shirt, the farce around the Nigel Martyn transfer negotiations and Johnson's conflicting financial interests in Tranmere Rovers. It also came to light that Johnson's initiative to relocate Everton first to Aintree then even further afield to Cronton Colliery was overly ambitious and would have relied too heavily on generating money from supporters in the form of expensive tickets and on-site concessions.

Johnson was first reported to be ready to sell his 68% stake in Everton in November 1997 first with international financier Joe Lewis and then Lord Grantchester, grandson of the late Sir John Moores and a director, linked with a buy-out but none of these rumours came to anything of substance. "Obviously, I am concerned at the situation – it's precarious at the foot of the Premier League but I have confidence in the manager and his abilities," Grantchester had said in an interview with the national press before the December 8th, 1997 AGM, one that Johnson survived. The forces who had aligned themselves against his wealth and power of Peter Johnson were left knowing that he would not relinquish it lightly, and he had no intention of leaving until he was good and ready.

It took almost another year and on 30 November, 1998 Johnson announced his resignation as Chairman after another week of turmoil in the club which included that controversial transfer of Ferguson away from the club. In the end he hung on for what seemed like a lifetime as deliberations ensued over who would buy up his shares but as the months passed in 1999, it finally became clear that the only real contender for the purchase of Johnson's shares would be Bill Kenwright.

It was pretty much the end of the century when Kenwright and finally pulled off his dream of becoming prime owner of his beloved Everton thanks to friends Paul and Ainta Gregg and the True Blue Holdings consortium, established to hold the 30,000 shares they had purchased for the price of £857 each.