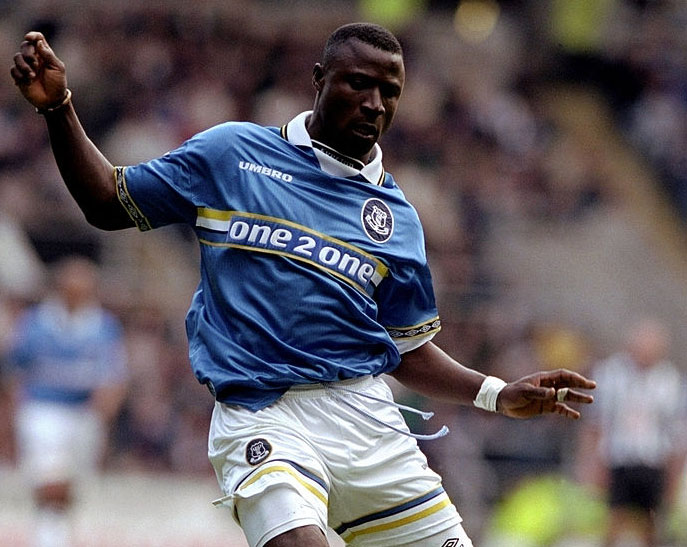 There were those who believed that, at 21, Ibrahima Bakayoko represented a superb investment in the future as well as being the most exciting attacking acquisition at Goodison Park since Andrei Kanchelskis who signed from Manchester United in 1995. Unfortunately for both the Ivorian and Everton, his sole season in English football didn't quite live up to expectations and there was a case for saying that "Back-o-the-Echo", as he affectionately came to be known, arrived at the club at the wrong time.

Since 1995, Bakayoko had been plying his trade with French League side Montpellier and began the 1998-99 season in explosive form, scoring four goals in as many games.  The powerful Ivorian was awaiting the results of an application for French citizenship in the autumn of 1998 but felt the time was right to move on and join Everton, a club he regarded as being suitably bigger.

He was expected to operate centrally, behind the main striker, but he was also renowned to be very effective when he moved out wide, usually to the right wing.  He was not particularly tall as strikers go but, among his skills, he was thought to be a good crosser of the ball, which suggested he could provide chances for a partner who is strong in the air, like Duncan Ferguson.

Unfortunately, Ferguson would be gone before Ibrahima could even settle into his new surroundings when the Scot was sold in controversial fashion to Newcastle United.

Bakayoko did add an explosive quality to the Blues' attack amd had the potential to be an extremely lively player but his inability to cope quickly enough with Premiership football's pace and aggression inevitably let him down.  On rare occasions, he showed he was very fast and penetrative with a very powerful shot.  His introduction to the rigours of the English game could not have been more traumatic, though, as he thrust in to a Merseyside derby – but he so nearly scored in the first minute!

After four months of valiant effort, the goals failed to materialise, with just five in his first 17 matches.  Add to that two missed penalties – including the crucial 6th penalty in the shoot-out against Sunderland in the League Cup – and it was hard to dispute claims that he looked like an expensive flop.  The simplistic naïveté he exhibited in his first games remained unchanged.  He was just not making any progress in the Premiership, and was dropped to the bench for an FA Cup tie against Coventry in early 1999.

He got another chance at Blackburn, where he knocked in two excellent goals to give Everton a vital win over their relegation rivals.  This earned him another two ineffective starts before Walter Smith consigned him to cameo appearances from the subs bench.

With Everton facing financial uncertainty under a massive overdraft approaching £20m, cutting the wage bill and offloading marginal players became a close-season priority.  In the circumstances, a good deal was done when Everton completed his transfer back to France, selling him to Marseille for £4m.