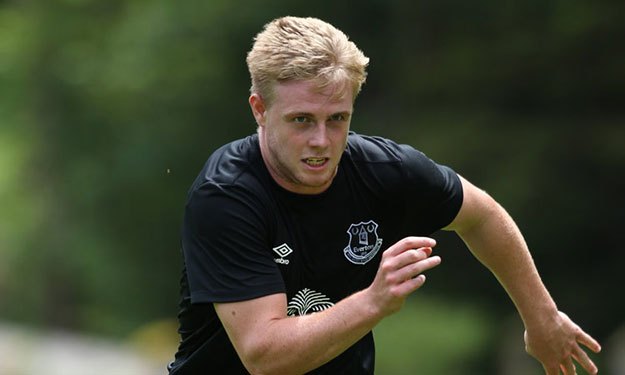 With an eye to picking up talented players for future growth the Everton Way, young Irish striker 19-year-old Sam Byrne was given a three-year contract with Everton in July 2014, following his release from Manchester United.

Byrne joined the Red Deviils in July 2011, entering the club's academy as a first-year scholar.  He made his debut for the club's Under-18 team on 27 August 2011, but it took three months for him to score his first goal, which came against Liverpool on 25 November 2011. He soon became a regular starter for United's Under-18s and went on to score four goals in 28 appearances in his first season with the club.

The 2012–13 season began slowly for Byrne as he scored just two goals in 11 appearances before the turn of the year; however, five goals in the second half of the season – including braces against Fulham and Southampton – signaled an improved return. In 2013–14, Byrne played in all six of United's Uefa Youth League group matches but was unable to get on the scoresheet as they finished bottom of Group A and were eliminated from the competition. On 31 January 2014, he was loaned to Carlisle United where  he made his senior debut the next day, coming on as a substitute against Bristol City.

He has also represented the Republic of Ireland at every youth international level from Under-15 to Under-19. However, he was released by United on 23 May 2014 and was signed up to join Everton on 18 July 2014, with appearances in Everton's Under-21 pre-season friendlies to follow before the 2014-15 FA Premier Under-21 League season got fully under way.

His first season in the Blues' Academy was disrupted by injury but he was back in the Under-21s side during David Unsworth's pre-season preparations in the summer of 2015. However, he did not feature in any of the senior pre-season fixtures and would go on to spend a second season playing for the Under-21s.

That was until early March 2016, when he suffered an unfortunate leg fracture in a training ground practice match. The 20-year-old Irishman had been making steady progress as a regular in the Under-21s and Unsworth said of the striker, "The boys are all gutted for Sam because they are a close group and he's a popular member of the squad. We will give him all the support he needs and I look forward to having him back amongst us as soon as possible."

It would be a long and slow recovery that lasted more than a year. He struggled with a hamstring problem during the latter stages of the 2016-17 season that hampered his return to full fitness. But in July, he signed a one-year contract extension with the club. Byrne said his new one-year contract at Everton had given him a “big boost” after after his injury struggles over the last couple of seasons.

“Last season was stop-start for me – now I'm ready to go again,” Byrne told evertonfc.com. “There were a couple of little hamstring niggles which I kind of expected after coming back from such a long time out. But I feel good now and I'm looking forward to all the training.

“I've been out for a long time and now I'm trying to impress David Unsworth and all the staff. I'm going to try and do my best. This contract has given me a big boost, so I'm looking forward to getting going.

Byrne was given another year with a contract at the Everton Academy, and eased himself back into things with run-outs in the U23s pre-season matches.  But opportunities turned out to be limited with just one 25-minute appearence as a sub in a Premier League Cup fixture.

In February 2018, he agreed a loan deal with Dundalk until the end of the season, playing in just two games for the League of Ireland side, after which his contract with the Blues expired and he was released. He joined Dundalk on a permanent basis after leaving Everton, and went on a season-long loan with Glentoran.