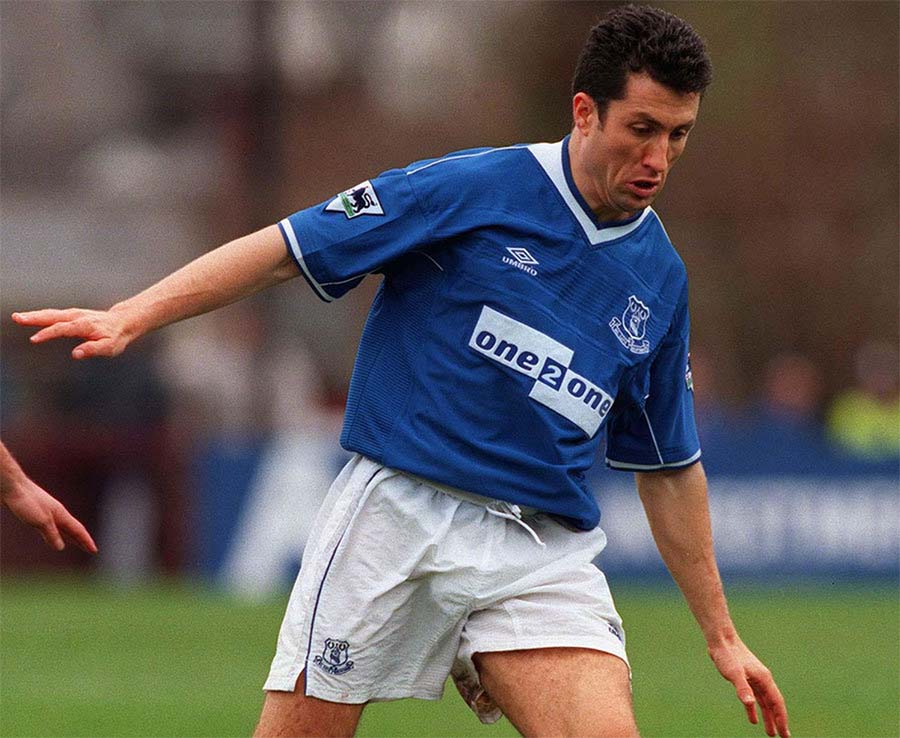 The arrival of John Collins was seen by many as potentially the most important new signing at Goodison Park for many years; confirmation perhaps that a new dawn was approaching for Everton.  Sadly, the Scottish star's two seasons at Goodison did not match these lofty expectations, although that might have been partly due to the fact that he spent much of his first season with the club playing with a broken toe sustained at the 1998 World Cup.

Collins marched into Walter Smith's Everton revolution from Monaco claiming he was a far better player since the last time he had figured in the British game in his native Scotland.  He had quit Celtic under the Bosman ruling after Euro 96 and blossomed into a cultured, quality midfielder under Monaco's legendary coach Jean Tigana before emerging as Scotland's most influential player at France '98.

As Everton's highest-ever paid player at the time, on a reported £29,000 a week, he said: "I have learned a lot since being in France, I have learned from good coaches and from being exposed to a more technical game.  I believe I am a much better player than when I left Scotland two seasons ago."

Collins emphasised a key reason for him joining Everton: "Walter being here was a major factor in my coming to Everton.  He told me of the changes he planned to make at the club and some of the players he intends bringing in that are vitally important to the future success of the club. I thought long and hard about things, but Walter being at Everton was a big pull."

Collins linked up in the Toffees' midfield with Olivier Dacourt, who was also signed for £2.5m just 48 hours earlier from Strasbourg.  Smith had made Collins and tough-tackling Dacourt the heartbeat of his new-look side, although perhaps the greatest midfield contribution would come from an unexpected source in the form of the unsung Don Hutchison.

Collins and Dacourt completed the main part of Smith's rebuilding programme, following the "Bosman" signing of former Rangers full-back Alex Cleland and the £3.8m capture of Italian centre back Marco Materazzi from Perugia.

After a disappointing few months, Collins showed a propensity to want too long on the ball to explore options which were not there because his teammates didn't play the type of creative football he was used to on the Continent.

After an operation early in 1999, Collins was sidelined for the rest of his maiden season at Goodison and didn't start full training again until towards the end of the campaign and he didn't play again until the following season.

Collins was never really able to produce his best form in an Everton jersey, though, until Hutchison emerged as a force in midfield and Collins belatedly revealed himself in 2000 as the midfield powerhouse Everton thought they had bought two years previously.  He was rewarded with the captaincy, and reaffirmed his desire to stay at the club.

That was until he was wooed by his old friend Tigana who had taken over at Fulham and after some tense haggling with the Cottagers' owner, Mohammed Al-Fayed, a £2.5m deal was struck to send the Scot to the Capital.

And after leaving, he told the London Evening Standard: "I wouldn't say I had regrets about joining Everton but it never went as well I had hoped.  I was told certain things when I went there about them having money to spend and it was all lies.  There was no money and they had to sell.  They played with big strikers too and the ball missed out the midfield a lot of the time."

Many years later, Collins would clarify the problems he had under Walter Smith:

"I’ve got to be honest that at Everton, the style of football wasn’t what I wanted to do or wanted to play. We had big Dunc (Ferguson) up front and we would go long too often.

"I went from Monaco where it was total possession and dominating games. At Everton, it was never going to be quite like that, controlling games, but it was a little bit too direct going to big Dunc, then he got sold to Newcastle and we brought in Kevin Campbell.

"We were comfortably away from relegation in the two seasons, then I had the opportunity when (Jean) Tigana came in for me when he came to Fulham, and I thought ‘I’m going to go back to the style I really enjoy which is getting it off the back four all the time and the game going through me.’

"It was a big decision going to Fulham, the first time I left the Premier League in Scotland, England and France and going down a division but I was confident in the players Tigana was signing that we were going to get up at the first chance and we did and it was a really enjoyable season in the Championship."