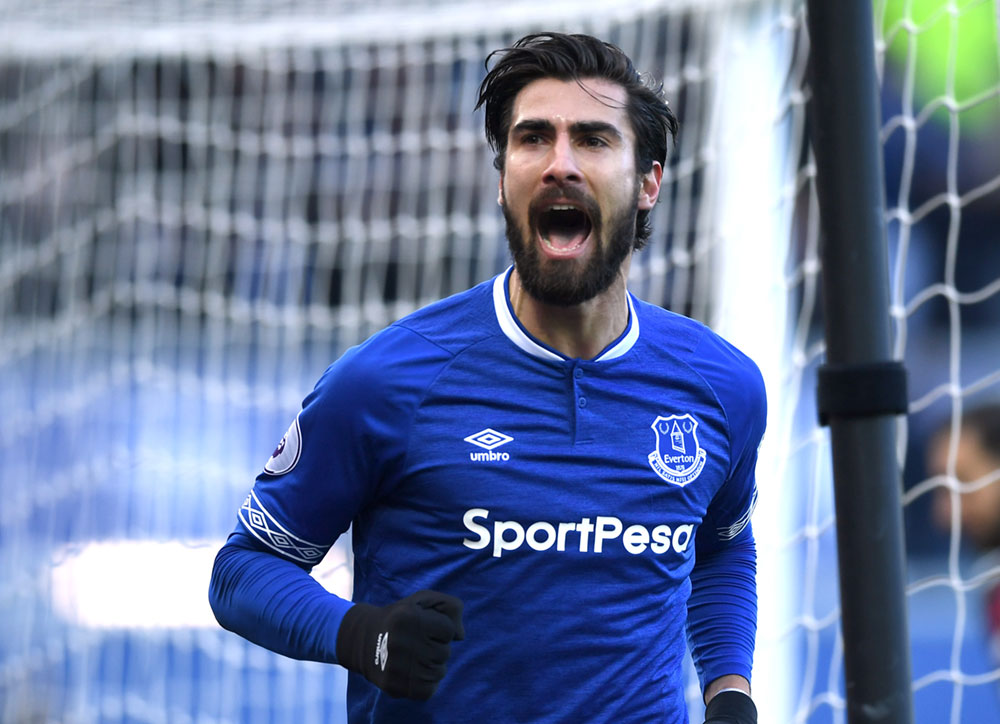 Everton moved to bolster their options in central midfield with the acquisition of André Gomes on a season-long loan from Barcelona in the summer of 2018 and eventually signed him permanently the following summer.

The 25-year-old emerged as a potential deadline day target in August 2018 with reports that Director of Football, Marcel Brands, and manager, Marco Silva, might launch a late bid to sign him as they sought to tie up the signature of his Nou Camp team-mate Yerry Mina.

The Portuguese, who had previously been linked with both Arsenal and Tottenham, was recovering from a hamstring strain at the time and would be unlikely to be ready for action until the following month at the earliest but that did not stop the Blues adding his talents to their squad before the transfer window closed. They would pay a €2.25m loan fee and were also believed to be paying his salary for the season.

Gomes began his career in his native Portugal with Benfica before moving to Valencia in 2015, initially on loan. Over the course of 63 appearances over the following two seasons, he garnered the attention of Barcelona who snapped him up for €35m.

Brought in as a replacement for Sergio Busquets, his time at Nou Camp didn't go according to plan, however, despite playing 46 matches and scoring three times. He was believed to have long favoured a move to the Premier League and almost joined Spurs the previous year, only for the deal to fall through.

His start for Everton would be frustratingly delayed for more than 2 months as he recovered from the hamstring injury he suffered on Barcelona's pre-season tour of the United States but he finally made his bow in October 2017 when he replaced Tom Davies in a home game against Crystal Palace and put in the kind of performance that would quickly make him a crowd favourite.

Showing pleasing vision, the ability to pick a pass while also demonstrating impressive strength on the ball in the centre of the park, Gomes adapted to the rigours of the Premier League almost instantaneously and he became a fixture in the team for the remainder of the 2018-19 season.

That led to inevitable hope and expectation that he could be signed permanently from Barca and, despite media speculation indicating serious interest from Tottenham and a couple of futile bids for his services from West Ham, the midfielder put pen to paper on a 5-year contract in June 2019. That also gave him the opportunity to select a new shirt number:

"The number 21 is a special number for me. When I left Benfica, I wore it at Valencia and that was my first experience outside of Portugal. That was a big change for me and everyone in my family knows that personal meaning.

"I also had the same number at Barcelona, so over a total of four years at two different clubs. I really like the number, I wanted to keep the number and I’m now looking forward to having it on the back of my Everton shirt."

Just as in first season at Everton, Gomes's start to 2019-20 was disrupted by injury when he sustained what is believed to have been a cracked rib during a home game with Wolves in September 2019, one that would sideline him for a month.

Unfortunately, however, worse was to come soon after he regained his fitness and just as he seemed to be finding his feet again in the Blues' midfield. Gomes suffered a fracture dislocation of his right ankle in a Premier League match against Tottenham in November when he was chased by Son Hueng-min and scythed down by the South Korean in an act of retribution for a seemingly accidental elbow to the face that was not punished by referee Martin Atkinson.

Son caught Gomes in full flight and the Portuguese appeared to catch his studs in the turf before he collided heavily with Spurs right-back Serge Aurier. It was immediately apparent that Gomes had suffered a serious injury, with players and fans turning away in horror. Son was initially booked by Atkinson but the decision was changed to a red card for endangering the safety of an opponent on the advice of Video Assistant Referee, Anthony Taylor. Insult was added to Gomes's injury two days later, however, when an independent FA panel voted to overturn the sending-off, allowing Son to resume playing while the Everton star would likely require the rest of the season to fully recover.

Gomes surprised almost everyone, however, by staging a remarkably swift recovery and was back in action just 112 days later. His form was chequered as the Blues struggled to find their form following the 3-month suspension of the season due to Covid-19, but there was hope that, with reinforcements added during the summer 2020 transfer window and the eventual return to fitness of Jean-Philippe Gbamin, the Portuguese would return to his best.

However, niggling injury problems continued to impact Gomes's fitness well into the 2020-21 season as he struggled to get back to 100% fitness levels and reclaim a regular place in the team. And his inability to score from midfield really limited the team that slid down the Premier League table to finish a disappointing 10th, which saw the increasingly ineffective Carlo Ancelotti walk away back to Real Madrid at the first opportunity.

Gomes was primarily used as a substitute by the Italian's successor, Rafael Benitez before he suffered a calf injury that kept him out for two months. He played sporadically under Frank Lampard after Benitez had been sacked but he remained frustratingly ineffective in a midfield crying out for inspiration and, by the summer of 2022, the word was that Everton were actively courting offers for the Portuguese.

Rumoured interest from his homeland failed to lead to anything tangible and Gomes would miss both pre-season and the start of the new campaign with injury. He returned to availability for the fifth match of the season but didn't feature before securing a deadline-day loan move to Lille in France.