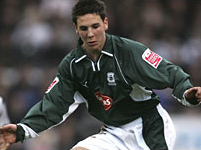 Dan Gosling arrived at Goodison Park at the beginning of January 2008 as a hot 17-year-old prospect, almost a year to the day after making his full debut for Plymouth Argyle (he'd already made his senior bow aged 16 years and 310 days the month before).

Everton paid the Pilgrims £1M (rising to £2M based on appearances and international recognition) for Gosling nine months after he undertook a trial spell with Chelsea along with two other promising Argyle teenagers, Scott Sinclair and Lee Summerfield.

"It's brilliant at Everton," he said after making the step up to the Premier League. Everything about it is so much different from Plymouth, no disrespect to that club but it's all new here � it is just fantastic.

In all, Dan made 12 appearances for Plymouth and scored two goals while also proving his versatility by filling in at right back for the southwest club.

He is believed to have completed a medical at Everton on 31 December 2007 before agreeing personal terms.  However, the move was not fully ratified for another two weeks, pending Board approval in the form of Robert Earl, whose presence had underwritten much of Everton's increased transfer spending since August 2007.

Likely part of the arrangement was the decision to allow teenage striker Lukas Jutkiewicz to join Plymouth on loan for the remainder of the 2007-08 season.  And he warmed to the Everton task with a few games for the reserves before getting injured for most of March.

He did get a few pre-season games in 2008 but it was pretty clear like the rest of the kids pressed into action in lieu of any new transfers that he wasn't really ready.

As the 08-09 season progressed, he started to become a regular on the ridiculously young seven-man Everton bench, but remained an unused substitute despite many an injury crisis... until Boxing Day, when he was surprisingly named in the starting line-up at Middlesbrough.

And what an excellent debut he had, showing some really nice touches and almost getting amongst the goals... three glorious chances to make himself an instant hero went begging but the promise was there. It didn't take him long to atone, though — Gosling grabbed his first Everton goal and the Blues' third just minutes after coming on as a late substitute against Sunderland in the final game of 2008.

As part of Moyes's "slowly, slowly" player development policy, Gosling was restricted to just three late cameo sub appearances in the FA Cup over the next month, but he saved the best until the last of those, extra time of a memorable derby 4th Round replay against Liverpool, when he neatly scooped in the winner with 3 mins left to become a massive Goodison hero.

That earned him four consecutive starts but he never really fulfilled the promise of that goal, and sank back to the subs bench, from where he scored just one more goal before the end of the season.  Plenty of growing still required...

2009-10, and great swaths of the Everton side laid low with injury. Surely the ideal opportunity for young Dan to make an impact? Named constantly as a sub, but given rare starts, mostly in the cup competitions, impact was not the result, and injury would lay him low for a couple of months either side of Christmas 2009.

He slowly reappeared in February 2010, his star turn being a nice goal in the 3-1 romp over Manchester United. But, in what would be his last game for Everton, Gosling was thrown on as a late and final sub at Wolves, and could not get his foot around an awkward goal-scoring chance that seconds later saw him flattened by 'keeper Hanhemann. His reward: a ruptured cruciate knee ligament for his troubles and the prospect of nine months without football.

The plan was for his rehabilitation to be completed at Everton but when it emerged in May that the Club's administrators had failed to submit a written contract offer that would have extended his three-year deal to five years on improved terms, a verbal agreement for which having already been concluded, rumours surfaced that Gosling could take advantage of a loophole in the Premier League's regulations and walk away from Goodison Park a free agent.

Astonishingly, that's exactly what he did, one side claiming he'd reneged on the deal, the other saying the player was devastated by the fact that his contract had not been renewed.  Gosling left Everton under a massive cloud in July 2010, supposedly in search of more regular first-team football in his favoured central midfield berth and presumably a nice signing bonus with another top flight team.

Having missed the deadline for submitting to Gosling's representatives an offer in writing to extend his contract, Everton thus lost their claim for up to £4M in compensation for the loss of the 20-year-old when a Premier League tribunal confirmed his free agent status... Everton are understood to be appealing the decision and remained in denial about the whole affair while the media reported he had joined Newcastle for £25k pw.

One conspiracy theory advanced at the time was that Gosling's injury was far more serious than Everton were admitting.  Indeed, an astounding part of this saga was Newcastle's willingness to sign the player despite his obvious injury problem and the prognosis that he would be out until Christmas 2010... so how on earth did he pass their medical?

Maybe the chickens would indeed come home to roost: After some reserves appearances in January 2011, Gosling was finally declared fit enough to make the Newcastle bench, and made his first appearance as a last-minute substitute v Sunderland.

But his new career at Newcastle was put into limbo again as he was experiencing continual discomfort on that problematic knee, and Gosling was forced to go back under the surgeon's knife in February 2011 and he played no real part in his first season at Newcastle... giving some credence to the conspiracy theory that had Everton deliberately allowing the crocked star to leave, despite protestations to the contrary.

He became something of a bit-part player as Newcastle had one of their best seasons since returning to the Premier League, starting only one league game, scoring just one goal and making 11 appearances from the bench, earning a red card as Newcastle lost at Norwich.  Hardly setting the world on fire!

The next season wasn't much better, with more injury problems keeping Gosling out of the Newcastle first team for four more months in 2012, after just four appearances, none of them in the Premier League, before he was expected to play again some time in the New Year (2013).

He never really amounted to much in four seasons with Newcastle, going out on loan at Blackpool for three months of his final season at the club before he joined Bournemouth on a free transfer in 2014. Two more lacklustre seasons in the Championship followed before promotion to the Premier League finally saw Gosling make a significant contribution, playing in most senior games.