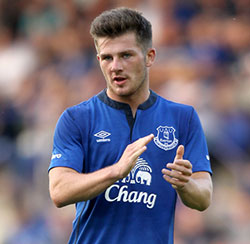 Everton appeared to have picked up a potential first-teamer when they swooped on Kilmarnock for 17-year-old forward Matthew Kennedy on the last day of the summer 2012 transfer window.

It was a move that didn't go down well with the Scottish club's manager, Kenny Sheils, who was not pleased with what a "derisory offer" that has unsettled his young prospect. He was forced to part with Kennedy, however, in a £250,000 deal that was concluded before the deadline.

"I really would've liked him to stay to get some more proper development," said Shiels. "Hopefully, he'll succeed; I really want the boy to do well, that's important to me. "Having had two years' experience behind him would be ideal."

Kennedy made his first team debut for Kilmarnock as a substitute on 19 November 2011 in a 1-1 draw against Hibernian at Easter Road. He went on to make 14 appearances before David Moyes snapped him up for Everton's Academy.

A Scotland junior international, he would progress to his country's U21s during his time with the Blues while he was sent out on loan spells at Tranmere Rovers and MK Dons.

A glimpse of the big time came for the Premier League game at Reading in November 2012 but that was the closest he would come under Moyes and his first-team prospects remained as distant under his successor, Roberto Martinez. Kennedy joined Hibernian for a six-month loan under ex-Everton U21s manager Alan Stubbs to continue his development, scoring one goal in 16 appearances (10 as sub) before returning to Everton's Under-21s.

With both Martinez and new U21s boss David Unsworth having seemingly made up their minds that perhaps he would not make the grade at Everton, Kennedy was sold to Cardiff City on transfer deadline day in January 2015 for an undisclosed fee.